Running carbon-neutral arena is team effort, one step at a time 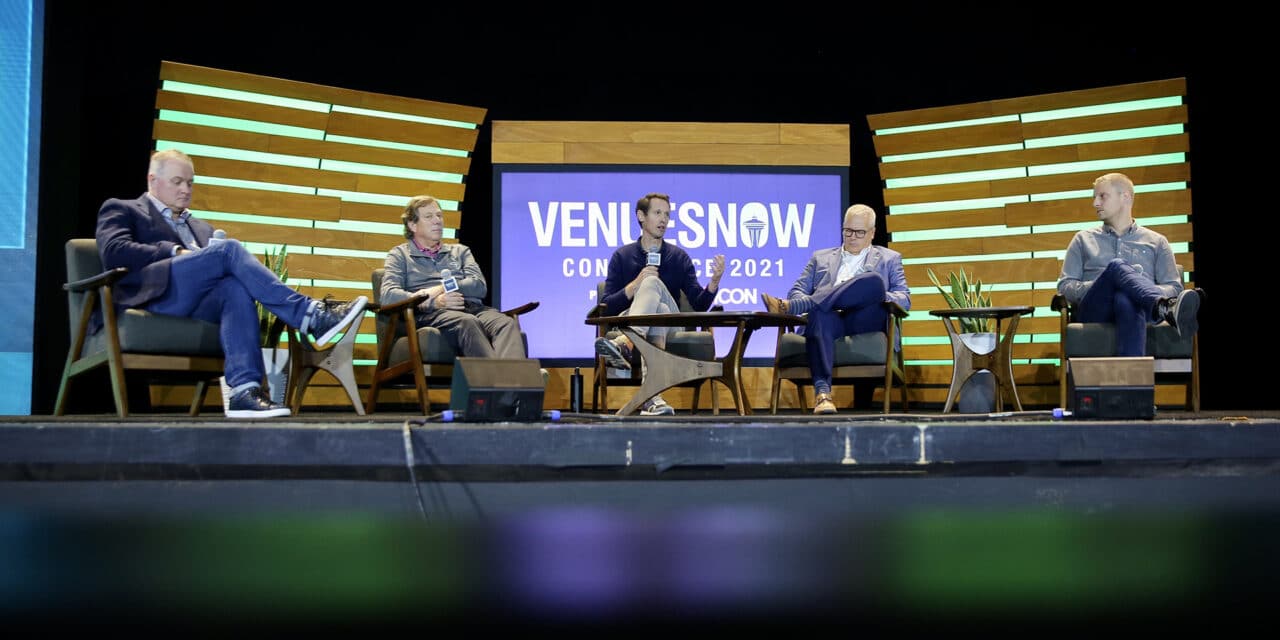 Rainwater collected by the roof that forms the ice floor for hockey. Electric grills at concession stands. The 200-foot-long “living wall” made up of plant life. The historic roof itself, which was “recycled” for use atop the arena, eliminating the need to build a new one.

They’re all examples of creative thinking to get to that net-zero goal.

“It took a veteran on my side and a team to really look at this thing differently,” said Steve Mattson, an executive vice president with OVG and general manager of the arena, home to the NHL expansion Seattle Kraken.

Mattson was part of the panel “The Making of the Climate Pledge Arena’s Green Commitment” during the first day of the fourth VenuesNow Conference.

Jason McLennan, partner and CEO of McLennan Design and an expert on sustainability who served as OVG’s consultant for arena development, moderated the session.

The drive to become the first carbon-neutral arena didn’t come without resistance.

At first, officials with Delaware North Sportservice, the arena concessionaire, told OVG that they couldn’t operate efficiently on all electric equipment. They said it couldn’t be done, according to Dishington.

OVG executives assured them it could be done, and working together, they would find a solution one step at a time.

On the food service side, it translated to retraining staff to cook on equipment powered by electricity instead of natural gas for simple things such as grilling burgers and baking pizza.

It takes a little more time to cook those items on electric hot plates, which have “recovery time” for reaching the appropriate temperature, Dishington said. The solution is “doubling up” on equipment to regenerate heat in a timely fashion in an arena environment, he said.

“It’s thinking productively on menu planning and testing things to get where we are so far,” Dishington said. “There’s no sterno to keep chafing dishes warm in the suites. It’s all hot plates. We had to rethink how to display food in that setting and follow all the right health protocols to make sure nobody gets ill.”

Those solutions had to be found — otherwise “you can’t call it Climate Pledge Arena,” said Chris Roe, Amazon’s head of energy and sustainable operations working with OVG on the project.

As the process unfolded, the all-encompassing sustainability initiative became a powerful marketing tool, according to Johnson, a former City Council member and a fifth-generation Seattle native.

“When we called ourselves the ‘Climate Pledge,’ that brand equity was reflected back to us from the individual sponsors,” he said. “They came out of the woodwork and said, ‘We want to work with you to make sure that we can amplify the sustainability of our brand.’”

Pepsi, for example, which holds the arena’s pouring rights, branded the monorail taking patrons on a two-minute ride to the arena from downtown Seattle as the Pepsi Zero Sugar Express.

“Sustainability is often thought of as something that is a loss for operating expenses,” Johnson said.

“For us,” he said, “we had folks cold-calling our premium sales team and our sponsorship team, asking how they could get involved, not just because they saw Amazon involved, but also because they want to brand Impossible Burgers (for example) for the marketplace.”