Tim Leiweke: ‘We can still inspire. Our best days are ahead of us.’ 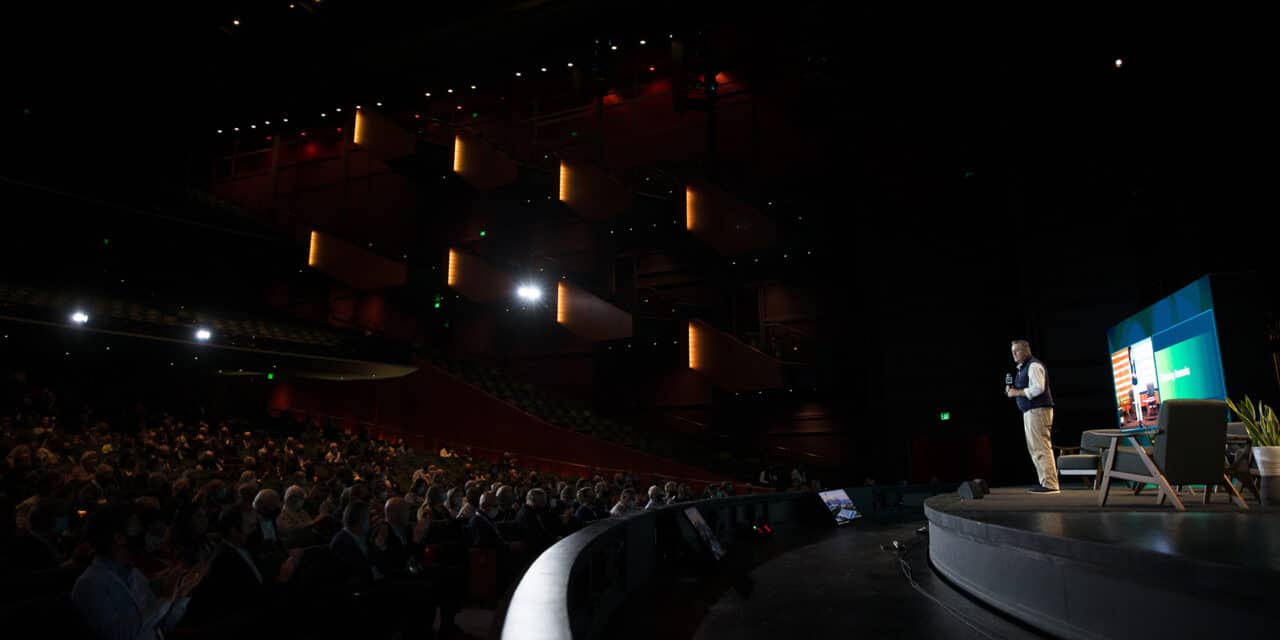 Oak View Group co-founder and CEO Tim Leiweke kicked off the fourth VenuesNow Conference with a pep talk for the industry tied to the opening of Climate Pledge Arena, the new $1.2 billion home of the NHL expansion Seattle Kraken.

“We’re in the live entertainment industry and are at a moment in time when we’re convincing all of our customers in music and sports and family shows (to return), and it is our job to make them feel safe again and get our industry back on track,” Lewieke said. “Seeing all the work that you’re doing with these tours and what we have to do to get that confidence back in our business and our facilities, it’s fantastic that we can all come together these next two days and talk about that.”

Six years ago, Leiweke, an arena geek by heart, approached Tim Romani, head of CAA Icon, an owner’s representative and a close friend. The two teamed up for several arena projects in the past while Leiweke was head of AEG, including the London O2, a similar project in terms of building an arena under an existing structure.

Leiweke came up with a brainstorm for how to launch OVG as a facility developer in 2015, and the first account he wanted to pursue was the transformation of KeyArena in Seattle. In turn, Romani turned to veteran architect Chris Carver of Populous and one of the industry’s most visionary people, Leiweke said. The vision was to redevelop the venue with a different mindset that would last for the next 50 years.

The result is Climate Pledge Arena, the centerpiece of discussion for this year’s conference. (OVG also owns VenuesNow.)

It’s been an uphill climb. The pandemic has provided multiple challenges for OVG, which has seven arena projects now in development. Project financing is a key issue but shipping equipment across North America and Europe has been the biggest challenge, Leiweke said.

Delaware North Sportservice, OVG’s preferred food provider, has been particularly affected by the breakdown as food service supplies sit at ports in Seattle and Long Beach, California. Delaware North is the concessionaire for both Climate Pledge Arena and UBS Arena in New York City, which is scheduled to open next month,

“We’ve never seen anything quite like it, never seen the complications we’ve had to deal with on getting our equipment in,” Leiweke said. “Throughout it all, I’m amazed at Delaware North and how calm, cool and collected they were (for the arena opening). They helped us get past the shipping issues and we are very grateful to them.”

OVG officials are most thankful that all of their vendors, sponsors and suppliers, as well as general contractor Mortenson and their subcontractors have stayed the course over the past 18 months, he said.

VNC attendees should keep that theme in mind as they tour Climate Pledge Arena on Thursday, Leiweke said. It’s the first venue projected to produce a carbon-neutral footprint, along with cutting-edge technology such as Amazon’s autonomous checkout and Patriot security systems.

Leiweke gave credit to Jason McLennan, OVG’s sustainability consultant, for guiding the herculean task of running an arena with all electrical systems and eliminating fossil fuels.

“He’s the most expensive consultant in the history of mankind and I love (him) dearly,” Leiweke said. “Jason gave us a path to figure out sustainability.”

All told, Climate Pledge Arena is “just a flake in the snowstorm” when it comes to the damage already done to the environment, he said.

“We can still inspire. We still have an opportunity to dream outside the box and create beautiful facilities that become the heart and soul of our communities,” Leiweke said. “That’s why it’s important to bring everyone together. Our best days as an industry are ahead of us.”