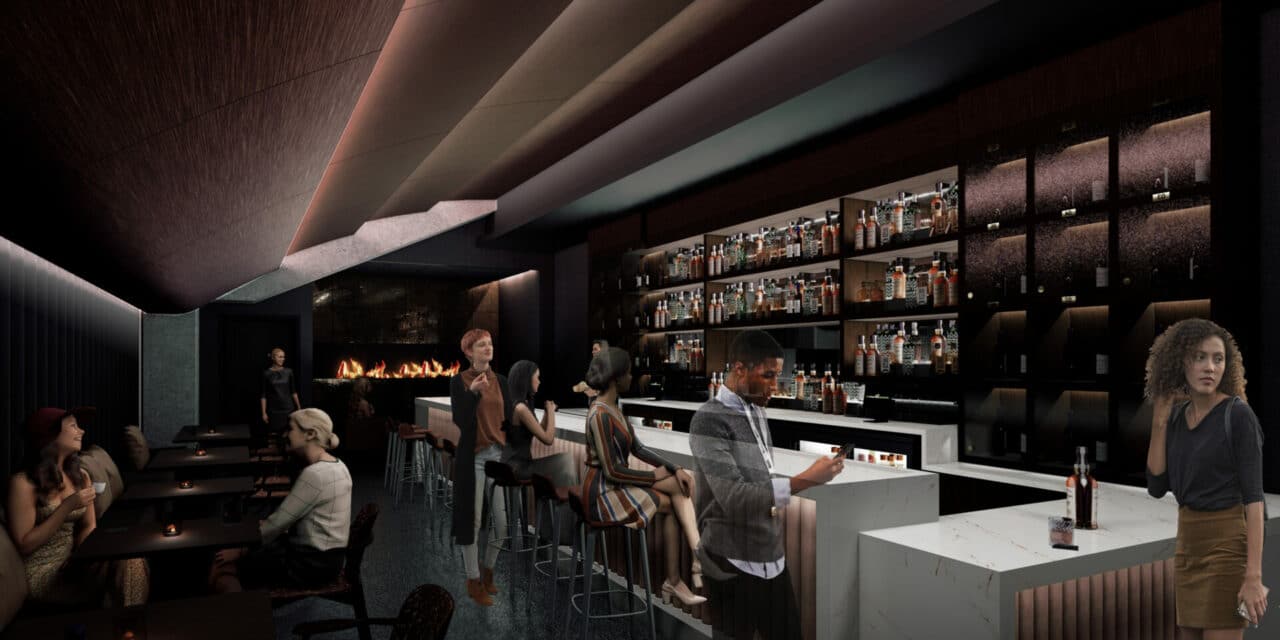 A rendering of  Enmarket Arena’s speakeasy, an event-level lounge exclusive to 60 patrons expected to open this summer. (Courtesy Perkins & Will).

Savannah, Georgia, a city rich with history and mysticism, is full of “speakeasy” bars hidden from street view with some destinations requiring passwords to enter those hideaway lounges.

Enmarket Arena, the new 9,500-seat venue opening this weekend, is developing its own version of the speakeasy, set to open in early summer after the premium product was added to the design about six months ago, late in project development. It will open in time for next hockey season. The ECHL Savannah Ghost Pirates, a newly-launched franchise, is the arena’s primary tenant.

The city of Savannah is funding most of the $165 million development.  Emarket Arena opens Sunday with a Riley Green concert, followed by The Eagles on Feb. 19.

In sports facility parlance, the 1,400-square-foot event-level speakeasy, currently under construction, falls in line with the bunker suite concept common among arenas and stadiums.

Elsewhere, Globe Life Field, home of Major League Baseball’s Texas Rangers in Arlington, has the Balcones Speakeasy. In Los Angeles, Tommy’s Bar, named for Tommy Lasorda, the longtime manager of the Los Angeles Dodgers, is themed as a speakeasy at Dodger Stadium.

In Savannah, The Speakeasy at Enmarket Arena, a temporary name pending the sale of naming rights for the space, is exclusive to 60 people. It’s situated on the north end and those patrons will have access to a private vomitory to their seats.

Officials are just starting to market the speakeasy, and as of this week, the membership fee had not been finalized because the premium club has not officially been made public. It will cover the cost of tickets to all events, plus food and drink, including alcohol, and preferred parking, said Derek Goldfarb, the arena’s director of partnerships with Elevate Sports Ventures, sales agency for the $165 million facility.

For concerts, speakeasy seats are at stage end, to the performer’s left, within 200 feet of the center microphone. For hockey, 20 of the 60 seats are in the first row behind the dasher boards, Goldfarb said.

Elevate is sending a mailer in the form of a commemorative 45-RPM record to prospective buyers. A temporary sales office will be set up in the speakeasy as part of the marketing pitch to give prospects a feel for the space.

“Our goal is to do a ‘shock and awe’ campaign with that mailer and follow up with calls and bring them to the arena and shows,” Goldfarb said.

Customers that purchased premium seats before the speakeasy was announced have the opportunity to upgrade their package, and some have shown interest in doing so, he said.

The speakeasy concept came to fruition after Elevate sold out the 17 suites and 900 club seats. Based on demand for those products, and in a city known for its culinary expertise, marketing officials felt there was a need to create an ultra high-end ice club for local companies and individuals that may have missed out on buying a suite.

“The demand was greater than what the market study indicated,” said Jeff Chermely, operations director at Perkins & Will, the project architect.

After Elevate huddled with OVG and Perkins & Will, the decision was made to develop the speakeasy theme, taking inspiration from Savannah’s multitude of hideaways, many of which are listed on tripadvisor.com.

At Enmarket Arena, the speakeasy walls, for example, will feel like a natural wall but will contain a door to get into the lounge, designed with top-shelf fixtures and finishes in a darkly-lit hospitality space.

All told, premium seats are relatively new to Savannah residents and there’s a learning curve for educating buyers on the products and amenities, Goldfarb said. They’re accustomed to the Savannah Civic Center, a multivenue complex that opened in 1974 with a scarcity of premium.

Enmarket Arena’s suites sold for $30,000 to $130,000 annually on multi-year terms, depending on the ticket package and location.

“People get confused sometimes between a club and suite and this isn’t a market that’s traditionally premium-focused,” he said. “Enmarket Arena will be the first venue to have it compared with Atlanta.”

Apart from the speakeasy, there’s another event-level club on the arena’s east side, facing the Springfield Canal, which runs alongside the building. There’s a covered space outdoors for dining purposes, Chermely said.

The biggest club is off the main concourse on the arena’s north side with views to the event floor, he said.

In general, the design focused on creating indoor/outdoor spaces in a city that celebrates its historical architecture with walking tours of historic landmarks and rooftop bars. The main concourse has an outdoor terrace spanning about 5,000 square feet that overlooks the canal and the city’s historic district.

On the upper level, another terrace provides views of Savannah’s church spires a half-mile from the arena.

“It’s a civic project and a major investment by the city and its people,” Chermely said.

Chermely knows Savannah well after designing a new high school in town that opened in 2012. There’s not too many restaurants and town squares he hasn’t seen over the course of the two developments.

“Part of the idea is they’re looking to drive heads in beds and get (more) people to visit and spend a weekend,” he said. “The city has been talking about building a new arena for 20 years. It’s been a long time in the making.”