Seen and Herd in the Deer District 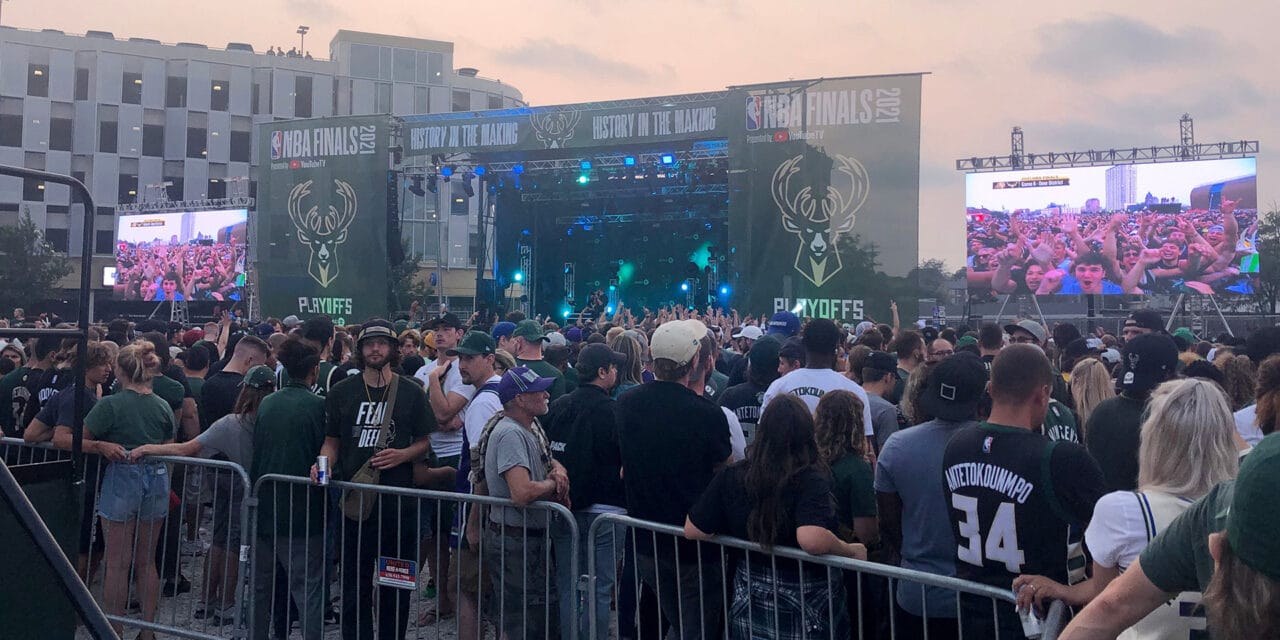 “Over the past month, the Deer District itself went through this organic growth that we couldn’t imagine,” said Bucks President Peter Feigin. (Getty Images)

The demand for real estate has reached record highs across many parts of the country. In Milwaukee, the same could be said for the Deer District after the Milwaukee Bucks captured the NBA championship.

For the clinching Game 6 of the NBA Finals on July 20, an overflow crowd of 65,000 people packed the district’s bars and restaurants, plus the plaza connected to Fiserv Forum as the Bucks won their first title in 50 years.

Milwaukee police said the count was closer to 100,000, according to local reports.

Regardless of the estimate, the streets of downtown Milwaukee basically became a gigantic living room airing the games on multiple videoboards across the 30-acre district.

For the first two rounds, Bucks playoff games were shown on a permanent screen at the district’s Beer Garden, which is owned by the NBA team.

For the Eastern Conference Finals, a portable screen was set up in a lot just south of Fiserv Forum at the site of Bradley Center, the Bucks’ old arena. For Game 6, when the district crowd swelled well beyond the previous peak of 25,000, more screens were set up north of the arena.

For big league teams across all sports, capitalizing on playoff revenue no longer is confined to the venue. The mixed-use model is now the standard for facility development, and the Deer District is a prime example.

The Bucks control the district and it’s on the rebound as the country struggles to escape pandemic mode. Two years ago, shortly after the development opened, up to 11,000 fans gathered in the district during a deep playoff run that ended in the conference finals.

This year brought a whole new dimension to the Deer District as officials scrambled to meet the demand for those without game tickets but who still wanted to be part of the celebratory atmosphere in a city where breweries play a key role in the city’s cultural heritage.

“Over the past month, the Deer District itself went through this organic growth that we couldn’t imagine,” said Bucks President Peter Feigin. “We were scaling the city for every game to accommodate the crowds.”

The Bucks teamed with all local public safety agencies to build a destination with the flexibility to expand it in a manner where people could still celebrate in a safe and secure fashion.

Those adjustments came in real time during the playoffs with tight windows to execute those plans.

As the Bucks advanced to the Finals, crowds in the district grew to more than 20,000 before the climactic Game 6. Officials in many cities may have felt they couldn’t control the logistics and shut everything down, Feigen said.

That wasn’t the case in Milwaukee.

The Bucks and the city came up with a solution to allow the party to continue and generate critical revenue at the district after the lengthy shutdown of sports and entertainment facilities due to COVID-19.

The resurgence of the pandemic came into play, although the Bucks felt a little more secure having the event outside, Feigin said. The team worked closely with the local health department that it had navigated the pandemic with over the last 18 months, which helped, he said.

“Thank goodness we had the acreage,” Feigin said. “It was really how we think about square feet per person, staffing, electricity, portable toilets, food and beverage and passageways. It’s like a festival. How do you build a temporary village for tens of thousands of people?”

The six-acre site where Bradley Center once stood helped fit the bigger crowds. The empty lot just south of Fiserv Forum had been closed to the public since it was demolished in May 2019. For the Finals, the site was cleaned up and filled with fans.

“That was another fun exercise in real time,” Feigin said. “We had suspended (further development) once the pandemic hit and that gave us the ability to comfortably expand way beyond what we could have imagined in a big way.”

The Bucks also control the Bradley Center lot. At this point, they are still “prospecting” the property for future use but no decisions have been made on a specific development, he said.

Apart from that site, The Trade, a new Marriott Autograph Collection hotel, is set to open in early 2023.

It will join the newest additions, Cream City Cluckery; Gather, a special events space; and Insomnia Cookies. Several bars and the Bucks Pro Shop opened in the district’s early stages.

One business, Punch Bowl Social, part of the district’s initial rollout, closed in March 2020 at the start of the pandemic. The Bucks are searching for a new tenant to fill the two-story, 24,000-square-foot space.

The exposure generated by the Bucks’ championship run should help them find a replacement in the district. The market for the district is getting back to what it was before the pandemic when several projects were on the table.

“The power of the NBA Finals and the focus on Milwaukee was so great that we have lots of people pushing toward us and interested in development,” Feigin said. “After having a four-week brand commercial, you no longer have to be conceptual. It’s all factual.”

Inside the 17,341-seat arena, general concession sales for the NBA Finals increased by about 25% over the regular season, Feigen said. Levy is the Bucks’ concessionaire and a partner in the Deer District.

Some experts felt that number was lower than expected for a championship series, considering the industry trend for increased spending coming out of the shutdown and Fiserv Forum’s move to cashless operations with a greater focus on mobile transactions and faster speed of service.

In addition, the switch to credit cards typically pushes per caps higher by 20% in many venues and food providers now apply sales tax on top of the retail price, said food consultant Mike Plutino.

At Fiserv Forum, the Bucks went to full capacity on June 1 after slowly scaling the building, which makes it difficult to compare the numbers considering all the variables tied to attendance for the 2020-21 season.

It may just be that Milwaukee isn’t on par with the NBA’s bigger markets, fellow consultant Chris Bigelow said.

The average spend for an NBA regular-season game is $22 to $25, Bigelow said.

“It’s a small market, so they’re not going to see the big jumps that some teams do,” he said. “The other side is that (sales) may have been really good before that because the team was doing well and people were spending more money.”

The Deer District did not cannibalize sales at the arena, Bucks officials said.

Levy increased concession prices for the Finals, which many food providers do during the postseason. The Bucks approved all pricing.

Retail per caps for the regular season in-venue vary depending on the market, but are generally below $5, Bigelow said.

“Incredibly, retail, which we have a hard time quantifying, is astronomical and it continues to grow,” Feigin said. “It’s two to 2.5 times higher over a regular-season game and still going at a strong rate.”

The labor shortage issue across all lines of business was the biggest challenge for the Bucks, he said. The team worked with arena vendors and suppliers to bring more housekeeping and sanitation employees for the playoffs.

Those part-time workers received an additional $1.50 an hour per shift and those who worked at least three shifts got a free Bucks merchandise item, said Barry Baum, the team’s chief communications officer.

“We created incentives for people to retain, but it was a much higher cost center to be fully staffed,” Feigin said.

Most food vendors do the same thing for playoffs and championship series across all sports.

“We did everything you could possibly think about to make sure we were beyond covered,” Feigin said.