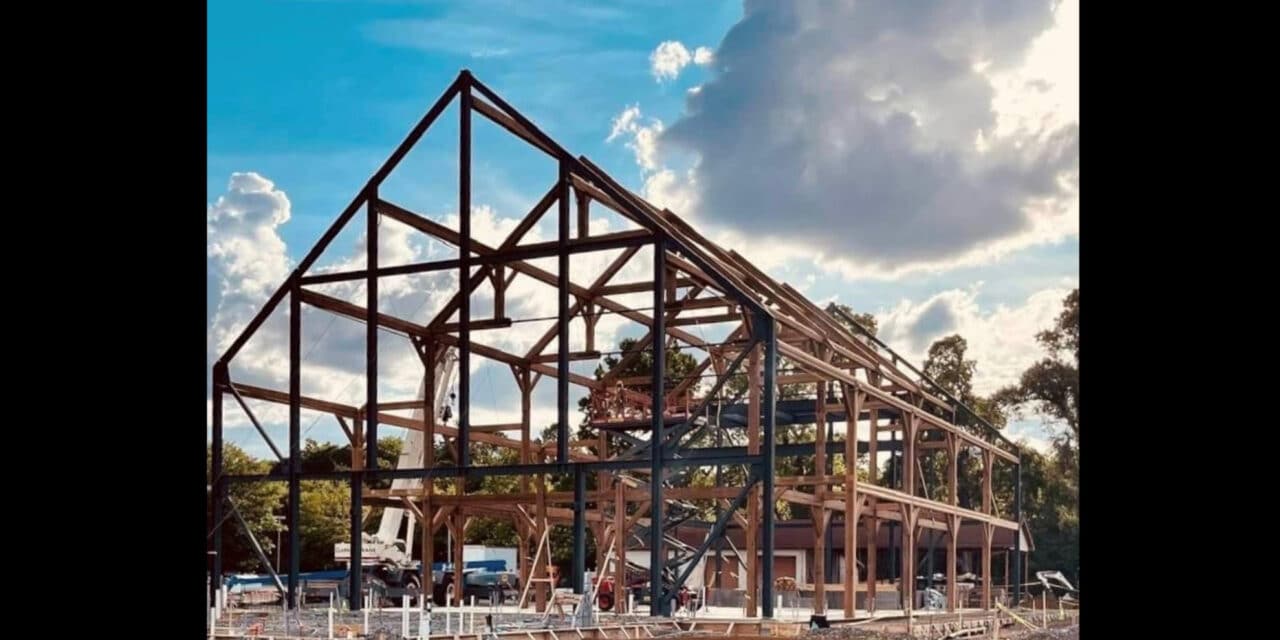 Timbers from North Carolina tobacco barns and an Oregon sawmill are being used to build the Roots Barn. (Courtesy Roots Productions)

Americana and the “Music City Roots” public radio show will have a new home in the ever-expanding Nashville area when the 600-capacity Roots Barn opens in the spring.

Construction is underway in Madison, Tennessee, just north of Music City, on the timber frame venue, which is being constructed of salvaged wood — sourced by Gateway, Montana-based Big Timberworks — from North Carolina tobacco barns and an Oregon sawmill, among other places.

Using old barn and sawmill wood — some of it 100 years old — certainly wasn’t the least expensive approach, but it made sense for what the developers want to accomplish.“It’s all about celebrating all authentic forms of American and Roots Music,” John Walker, executive producer with Roots Productions, LLC, which has produced “Music City Roots” for the past 12 years and is developing the new venue. said. “We are also building this venue next to (the historic Amqui) train station that was built in 1910, so we figured it would be really good to have 100-year-old barn wood next to it. It’s all about authenticity. That’s what our brand is about, and we figured it wasn’t going to hurt the acoustics either.”

Walker said the timbers arrived precut and marked and putting them together is like working with a big erector set.

“It’s a real artisan piece of work,” he said, noting it will have a mezzanine balcony and a 60-foot-high ceiling.

He declined to reveal the development cost, saying only that it’s more than originally planned and that the equity partners involved are less concerned with holding down expenses as they are with building an outstanding venue positioned for success.

“As a result, the budget is kind of in flux,” Walker said. “Maybe next time we talk I’ll be able to give you a hard number.

A “barn-raising” event was planned for Aug. 5 to celebrate the project’s progress and promise.

The idea is to create a Wolf Trap-esque performance space that will host standalone shows and other events as well as the “Music City Roots” radio show most Wednesday nights in conjunction with WMOT Roots Radio 89.5 FM, the 100,000-watt Americana-format public radio station out of Middle Tennessee State University in Murfreesboro, according to Walker.

“We kind of outgrew that space and then went to a place called The Factory in Franklin” before moving around for a time, Walker said. “It’s just gotten to the point where we felt like we needed our own venue. Those places were great hosts, but we had to set up and tear down the show in one day and we just felt like the brand had gotten to point where we needed to have our own place.”

The feel in Madison is decidedly different from the bustling tourism and nightlife — yes, including bachelorette parties — that’s been a part of Nashville’s explosive growth. In some ways, it’s become a center for artists priced out of Music City proper. Add to that Madison’s plans for a park adjacent to the Roots Barn and other infrastructure improvements and the developers feel they’ve landed in a sweet spot, Walker said, adding that out of town visitors soon be able to take in the energy of lower Broad Street one night and an authentic Americana and roots music experience in an ideal acoustic setting the next.

“We want to be a kind of alternative to what’s going on downtown,” Walker said.

The radio station will have a remote studio in a separate building and artists will enjoy a standalone 1,800-square-foot “green building” (in lieu of green room), with a portico that connects to the backstage area, he said.

“When it’s time to play, (the artists) just take a couple of steps and they’re in the venue,” Walker said. “That way we were are able to maximize the grandness of this beautiful performance space. The bathrooms and bars, anything that doesn’t have to do with purely listening to music, you have to leave the room There’s nothing that happens inside that main space but music. That’s it.”

The venue will feature a catering kitchen that will accommodate a variety of private and public events and receptions, Walker explained.

“We want to represent the same authenticity in our food as we do in our music,” he said. “We’ll have a barbecue smoker on site. We’ve got a whole row of space to offer food trucks so we can vary the options. We’re not going to be a restaurant, per se. We have a full-service catering kitchen for private events so that we can host various caterers and then we have a little outdoor concessions area where we’ll rotate its menu.”

The food will represent the mix of cultures that combine to make Americana and roots music a rich tapestry of influences, Walker said, adding, “It won’t be just barbecue, but how could we not? It has to start there.”

People attending shows at the Barn will be able to pre-order food when they buy their tickets and pick it up at a designated time, he said.

Explaining the thinking behind keeping the venue at 600 capacity, Walker noted that Nashville could use a non-bar space for some touring acts coming through town.

“We wanted to build a very intimate venue that was built from the ground up with excellent sound in mind,” he said. “It’s also essentially a TV soundstage. We’ve got an in-house video suite because we film our show for PBS and we wanted to be able to offer that to our external clients too.”

The sound system is being supplied by Sound Image out of Escondido, California.

“Their Nashville office has been a strong supporter and has been with (Roots Productions) from the beginning,” said Danny Poland, who serves as the Roots Productions’ manager of technical services and will be the new venue’s production maven.

The venue will have full audio and video capturing capabilities, said Poland, who was once an employee of Sound Image.

“We’ll have our own in-house video crew, cameras, three mixing desks, monitors front of house and a broadcast recording room for audio for capturing the shows and mixing as well to live streaming, mixing to WMOT Radio, ‘Music City Roots,’” he said.

Walker said he hopes some touring acts who could play bigger rooms will opt for a night or more at the Roots Barn when coming through Nashville and Poland said artists and agents have already inquired about opening the joint.

Walker pointed to an artist like Jason Isbell, who he said could sell out Nashville’s 20,000-capacity Bridgestone Arena, but chooses to do multiple nights at the Ryman Auditorum, which seats about 2,500, as it allows for a more intimate experience between artist and audience.

“We wanted to be able to offer that same kind of environment,” he said.

A naming rights sponsorship would have to involve the perfect partnership or a lot of money, but one is not being actively sought, Walker said.

“Our television shows and ‘Music City Roots’ and then a ‘Sunday Soul’ show that we’re doing,” he said. “We offer sponsorship packages on those, which are a package on-site activation in addition to advertising on the television shows, and we have (the) partnership with WMOT … and they’ve contracted us to help them become an Americana station and license our brand as Roots Radio. All of those things come with sponsorship activity.”

The original plans for the Roots Barn were penciled out by the daughter of the project’s construction manager, a recent architecture school graduate.

“We took that to Centric Architecture in Nashville and they looked at this thing and they immediately wanted to hire this young lady,” Walker said. “Really the design hasn’t changed much from what she had suggested.”

Having sound and lighting on board through the design phase has been a major plus as all of the technical systems and cable runs are well integrated and preserve the building’s original vision, Walker and Poland said.