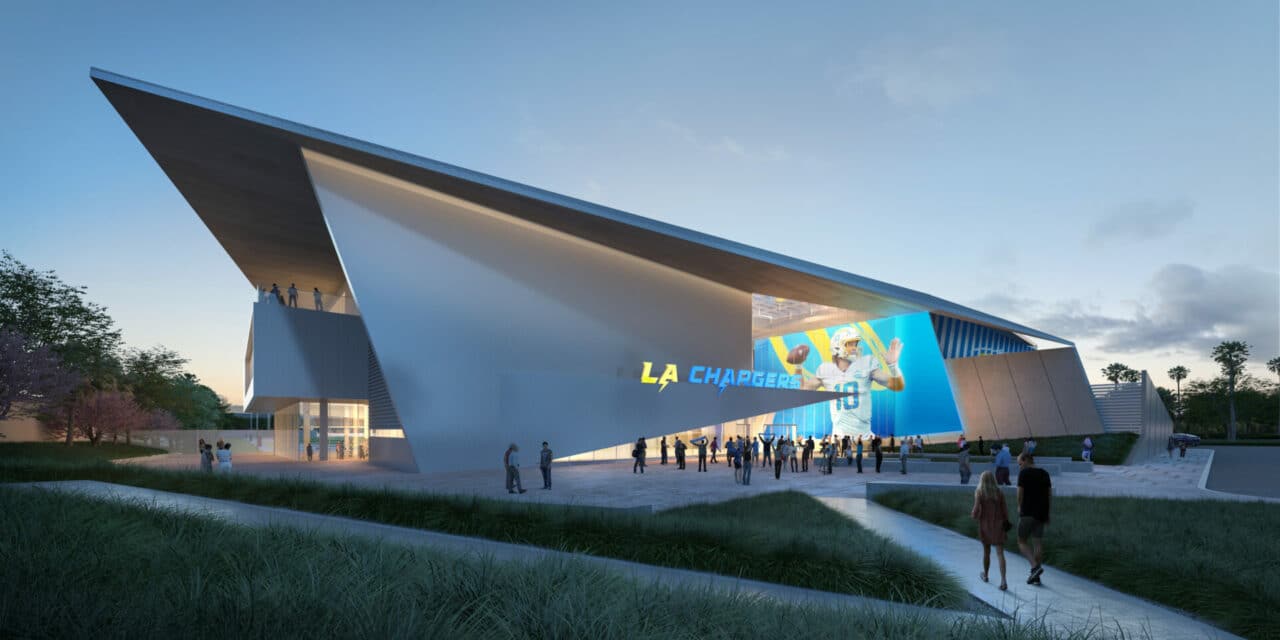 CHARGING AHEAD: The Los Angeles Chargers’ new headquarters and practice facility, shown in a rendering, is designed by Gensler. The $100 million project should break ground by early April. (Courtesy Gensler)

SMA seminar returns in-person as some recover from COVID-19

HOLLYWOOD, Florida — Daktronics executive Jay Parker came up with the best analogy for summarizing the past two years of pandemic-era sports and entertainment at the Stadium Managers Association seminar.

“Over the last 18 to 24 months, I’ve aged in dog years; it feels that way,” Parker, the scoreboard maker’s vice president of live events and spectaculars, said during a session on COVID-19’s effect on the overall industry.

It’s a feeling most folks would agree with among the estimated 300 attendees at the SMA’s 48th annual event. Dates were Feb. 13-17 at the Margaritaville Hollywood Beach Resort.

Last year’s seminar was held virtually. As the event returned in person this year, Parker has recovered from coronavirus after catching it seven weeks ago. One sports architect caught it twice. In his keynote address, baseball hall of famer Andre Dawson said he just got over COVID and was cleared the night before his SMA appearance.

It’s a sign that the pandemic isn’t over by any stretch, but time marches on and the business of venue development has recovered to a large extent and is in the midst of another boom, according to facility designers, builders, vendors and key manufacturers such as Daktronics.

“There’s been two years worth of demand because there wasn’t a lot done in 2020 and ‘21,” Parker said. “All of a sudden, everybody woke up and tried to make their next season better than it was the previous year.”

Daktronics reduced its workforce during the height of the pandemic and is now trying hard to get them back. As of mid-February, the company had more than 150 job openings, which is 10% higher than before the pandemic, he said.

It’s a critical piece of the equation for Daktronics, which is investing about $20 million to expand operations across its plants in Brookings and Sioux Falls, South Dakota and Redwood Falls, Minnesota. The goal is to develop greater automation to help clear a backlog of orders, Parker said.

Gensler is among the national sports designers keeping extremely busy, said Ron Turner, its leader of sports and entertainment.

The architect, among other projects, is working with NFL teams and municipalities to upgrade stadiums in Nashville and New Orleans, and it’s designing the Los Angeles Chargers’ new headquarters and practice facility. The $100 million development in El Segundo breaks ground by early April with completion in 2024.

Some architects laid off during the pandemic, such as David Bower, have found new life late in their careers.

After spending 32 years with Populous, Bower is now a principal with Marc Taylor, an owner’s representative hired by the Cleveland Guardians to help plan a $435 million makeover of 28-year-old Progressive Field.

Ironically, there’s a chance Bower could be engaged with Populous once again should the architect win the job to design those upgrades. The old HOK Sport, now Populous, designed the original ballpark.

For everybody in the stadium biz, the big challenge remains the supply chain issue as equipment gets stuck in port. 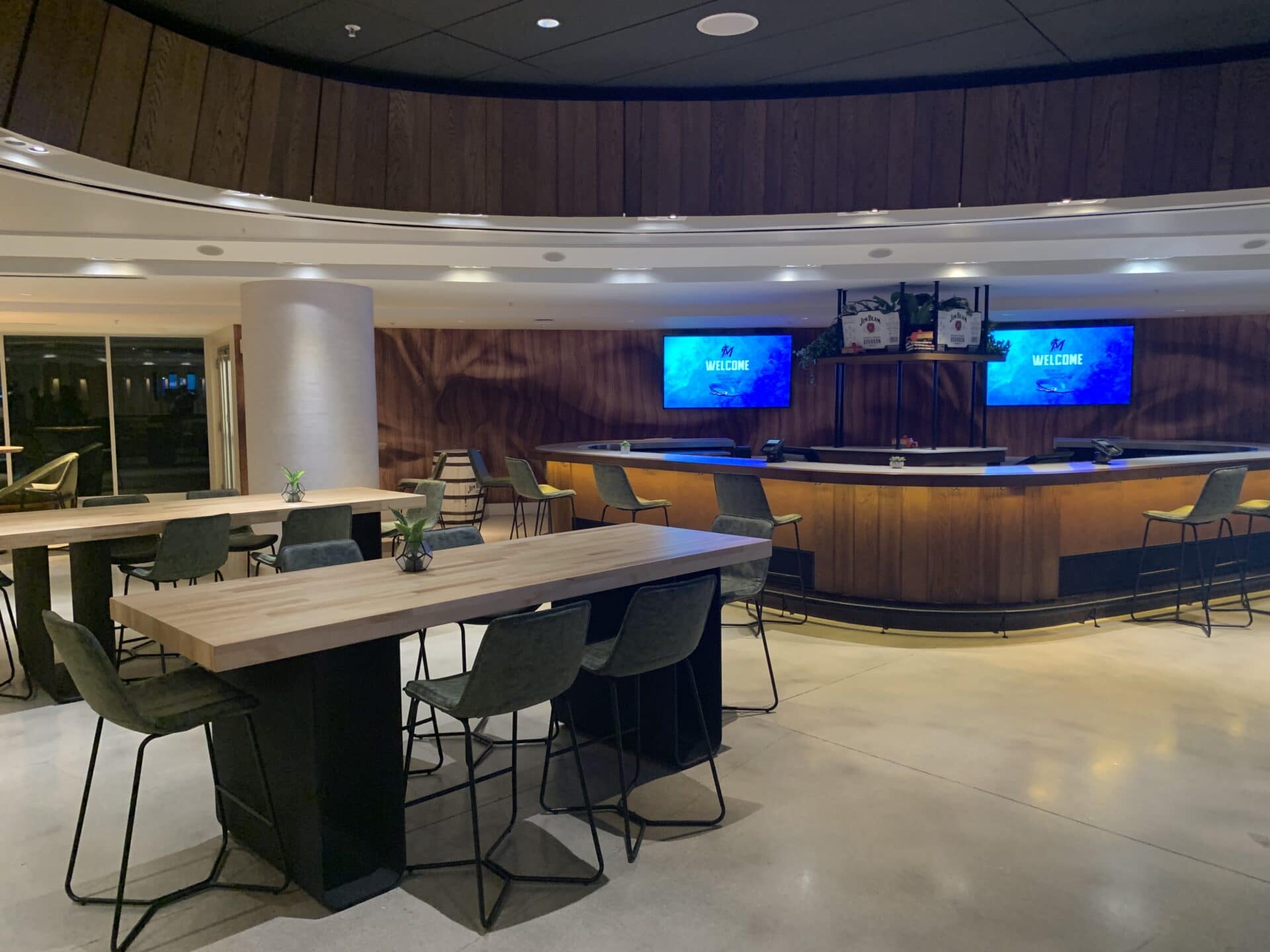 Plus, air cargo lines have canceled 50 daily routes between the U.S. and China tied to 14-day quarantines required in both countries. For those still moving ahead with shipping equipment from China, costs have skyrocketed from $35,000-$45,000 to a high of $300,000-$400,000 per shipment, Parker said.

For Daktronics, they’re forecasting projects for clients with a greater lead time of 12 to 18 months due to the lengthy delays they face for delivery of parts from their suppliers. In some cases, it takes six to eight months compared with three to four months before the pandemic.

As a result, two Major League Baseball teams and one NFL club placed orders for videoboard projects for early to mid 2023, far enough in advance to “avoid the chaos” going on with the supply chain, Parker said.

The NFL had its own brand of chaos for the 2021 season with stadiums at full capacity, which was a good thing.

“It was a pretty special run,” O’Reilly said. “Clearly, the game is strong and the fan base is strong. To see the audience numbers that came out with 112 million, the most watched television show in five years (and) to do that back in LA after not having a Super Bowl there in 29 years, at an incredible stadium —- it was a big one.”

SoFi Stadium played host to the NFC championship two weeks before the Super Bowl, which significantly reduced the lead time league officials had to plan for the game compared with the typical five-week window to build out the campus, create the secured perimeter and complete all the other logistical pieces required for the event.

“The NFC championship game is a very different piece than the Super Bowl, for flipping the switch and sprinting to get there,” O’Reilly said. “So many of our partners, so many of whom are in this room, kicked into another gear to get it done.”

“Interestingly, we got a really heavy early crowd,” O’Reilly said. “Gates opened at 11:30 a.m. Pacific and there were big crowds queuing by 11. We had to work to get everybody through safely and quickly on the front end there to do that and felt good about that.”

For the first time, the Super Bowl was a fully mobile ticketed event for a venue at full capacity. (Last year’s game at Raymond James Stadium was fully mobile for a restricted capacity crowd).

Ticketmaster did an exceptional job delivering a smooth experience, O’Reilly said, based in part on the fewest number of calls to the Super Bowl NFL Control over ticketing issues compared with previous years.

Elsewhere in Los Angeles, more than 100,000 fans passed through the NFL Experience, the league’s fan fest held at the Los Angeles Convention Center, which created a hub of activity downtown and at LA Live down the street, O’Reilly said.

OVERHEARD: Miami Marlins officials gave SMA attendees a tour of upgrades made to LoanDepot Park over the past five years. Among the improvements are the renovated diamond club behind home plate, Obie’s concession stands, where basic ballpark fare costs $3.05, matching the city’s area code, and new bar hangouts. The Marlins are still working on a new concept for the event level space behind the left field wall to replace the old Clevelander, which closed two years ago. When the stadium opened in 2012, the space was modeled after the South Beach nightclub and featured a swimming pool and body painted models. The ballpark’s lime green color scheme, the fish tank behind home plate and the home run sculpture in center field, which many thought was an eyesore, were removed shortly after new ownership led by former New York Yankee Derek Jeter took over the Marlins in 2017. … The SMA renamed its lifetime achievement award for the late Bill Wilson, a longtime member. The former manager of Qualcomm Stadium worked six Super Bowls, extending to his 27-year tenure with the Pasadena Police Department. Wilson died in December. … Super Bowl LVI marked the fourth year Super Bowl NFL Control was graced with a plaque honoring the late Jerry Anderson. He was a principal with Populous and served as the Super Bowl’s logistical czar for more than 30 years. … Lou Marciani, former director of the University of Southern Mississippi’s National Center for Spectator Sports and Security, has formed a new conference. The Innovation Institute for Fan Experience, focusing on issues facing the industry coming out of the pandemic, is set for May 24-26 at Caesars Palace in Las Vegas. Marciani ran the S4 conference for many years. … Rick Nafe, SMA seminar chair and former general manager of Tropicana Field, and Andre Dawson attended the same high school, Southwest Miami Senior High, in the early 1970s. Dawson was two years behind Nafe in school. They both played football there. “He was better than I was,” Nafe said in his typical deadpan manner. “I held the tackling dummies.”