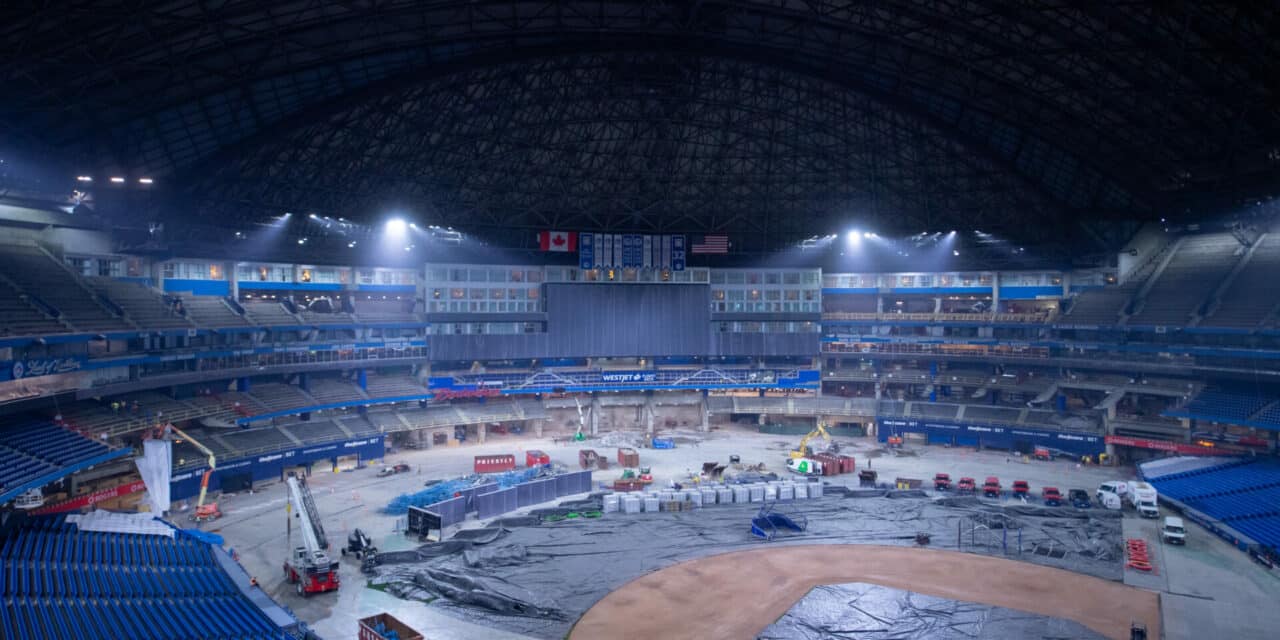 DOME WITH A VIEW: October saw the start of $300 million in renovations to Rogers Centre, home of the Toronto Blue Jays. (Courtesy team)

Industry on cusp of another building boom

The year 2022 became one of the busiest for sports facility development over the past decade as a flurry of arena and stadium projects ramped up following a two-year pause due to the pandemic.

The NFL was an especially active space with the Buffalo Bills, Tennessee Titans and Chicago Bears all taking steps to build new stadiums with architects on board going through the first phases of design. The Bills and Titans are both several steps ahead of the Bears and expect to open their respective buildings for the 2026 season.

As Bears owner Virginia McCaskey celebrates her 100th birthday today (Jan. 5), the Bears still face multiple hurdles with stadium financing and local approvals required before they can start construction on a new facility at the site of Arlington International Racecourse in Chicago’s northwest suburbs.

They must also find a resolution with the Chicago Park District to get out of their lease at Soldier Field, which runs through the 2033 season. The new stadium is just one piece of a massive retail and entertainment district proposed for the 326-acre property.

Manica Architecture is designing the Bears stadium and the Titans’ $2.1 billion building in Nashville. Populous is the designer for Buffalo’s $1.4 billion stadium to be built next to Highmark Stadium, the Bills’ home since 1973.

Elsewhere in the NFL, the Cleveland Browns, Cincinnati Bengals and Jacksonville Jaguars are in the early stages of developing major renovations to their stadiums. In Cleveland, HKS is forming a plan to upgrade First Energy Stadium, tied to a new mixed-use district along Lake Erie. 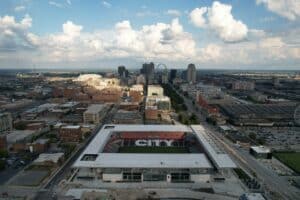 On the arena front, the Philadelphia 76ers made a big splash in July when they announced a long-term plan to build a new NBA venue in the city’s Fashion District next to the Chinatown neighborhood. David Adelman, a Philly developer and a new Sixers shareholder, is spearheading the project.

The goal is to open the arena by 2031, the year their lease expires at Wells Fargo Center, according to Adelman. The Sixers share that building with the NHL Flyers, whose owner Comcast Spectacor owns the arena, and is privately financing a multiyear, $350 million renovation of the 27-year-old facility in the South Philly Sports Complex.

Gainbridge Fieldhouse, which stood out for becoming the NBA’s first retro-themed arena when it opened in 1999, became the latest building of that era to go through an extensive facelift.

The Pacers partnered with the city of Indianapolis to pay for the $360 million project, completed in October 2022. The development of an outdoor plaza, expected to debut in the spring of 2023, plus the Pacers’ new practice facility across the street, which opened in 2017, adds up to about $500 million in total investment for the downtown venue.

In Major League Baseball, construction started in October on the first phase of $300 million in renovations to Rogers Centre, home of the Toronto Blue Jays and North America’s first retractable-roof stadium built in 1989.

The revamp of the 100, 200 and 500 levels with new social hangouts, standing-room platforms and new seating, some of which overlooks elevated bullpens, are among the initial fan-facing improvements.

National firms HOK and Mortenson are part of the development, which, at a cost of roughly $460 million includes St. Louis City FC’s practice facility attached to the stadium.

In college football, San Diego State University stole most of the thunder on the facility front by opening Snapdragon Stadium, a new 35,000-capacity facility on the site of the old Qualcomm Stadium.

As the calendar turns to 2023, the University of South Florida is developing a new 35,000–seat stadium to open in 2026. Populous and Barton Malow teamed on a design-build format to deliver the project. USF has played home games at Raymond James Stadium since 1997.

In addition, University of Miami booster John Ruiz is pushing to build a new 60,000-seat stadium. There are few details on the development apart from some HKS renderings. The proposed site shifted from on campus in Coral Gables to Tropical Park, an old horse racing track. HOK will design the school’s new $100 million football practice facility that breaks ground this year.