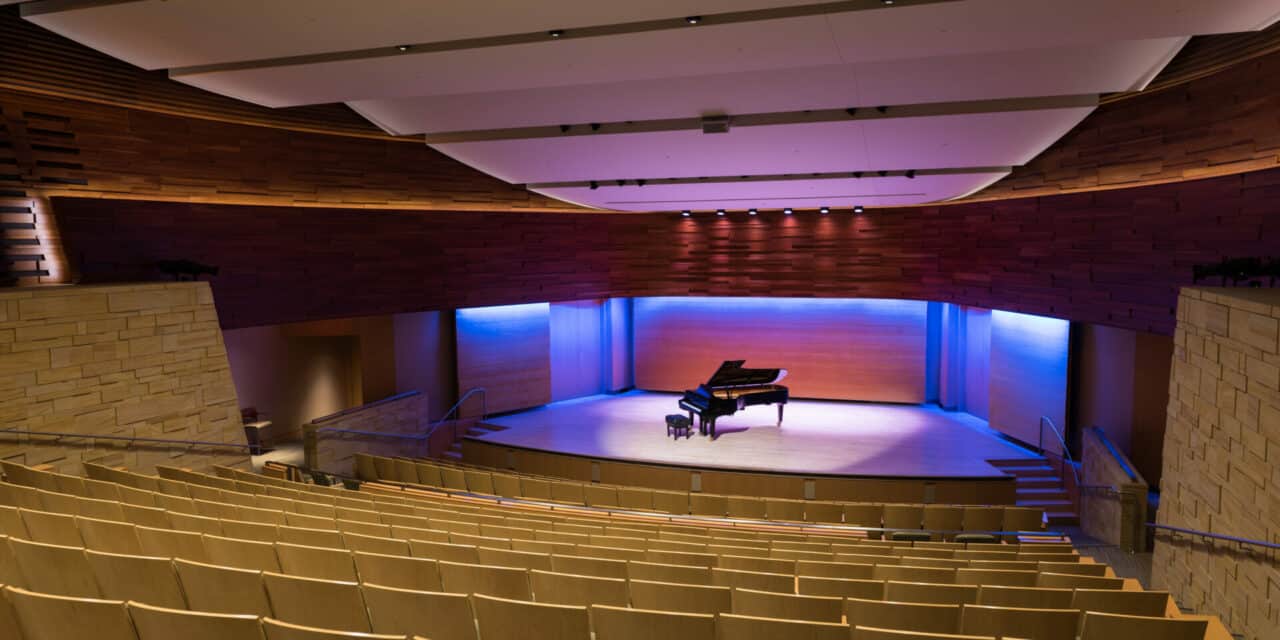 The MIM Music Theater is a jewel box in a musical instrument treasure chest.

“The theater is a gem and such an asset to the museum,” said Rich Walter, MIM curator for the U.S. and Canada. “It’s a unique venue in the way that it is so integrated with a larger mission and a larger facility that has a totally different purpose than strictly a performance venue.”

The reason has a lot to do with the mission of the museum, which is a repository for 15,000 instruments from 200 countries around the globe.

“First off, it’s an extraordinary theater under any circumstances,” said Lowell Pickett, longtime artistic director for the theater. “The comfort and amenities that are offered for both patrons and audiences and the backstage amenities and comfort for the artists are rare in a theater of this size and probably unheard of.”

Features go beyond dressing rooms and proximity of the loading dock. The monitor, front of house and lighting are state of the art. The percussion and microphone inventory is extensive. For example, a pianist would have their choice of a Steinway Model D Grand Piano or Yamaha CFX Concert Grand Piano; a drummer could select the Yamaha Custom Maple Drum Set or the DW, a sought-after kit from the custom company that started as the Drum Workshop in 1972. 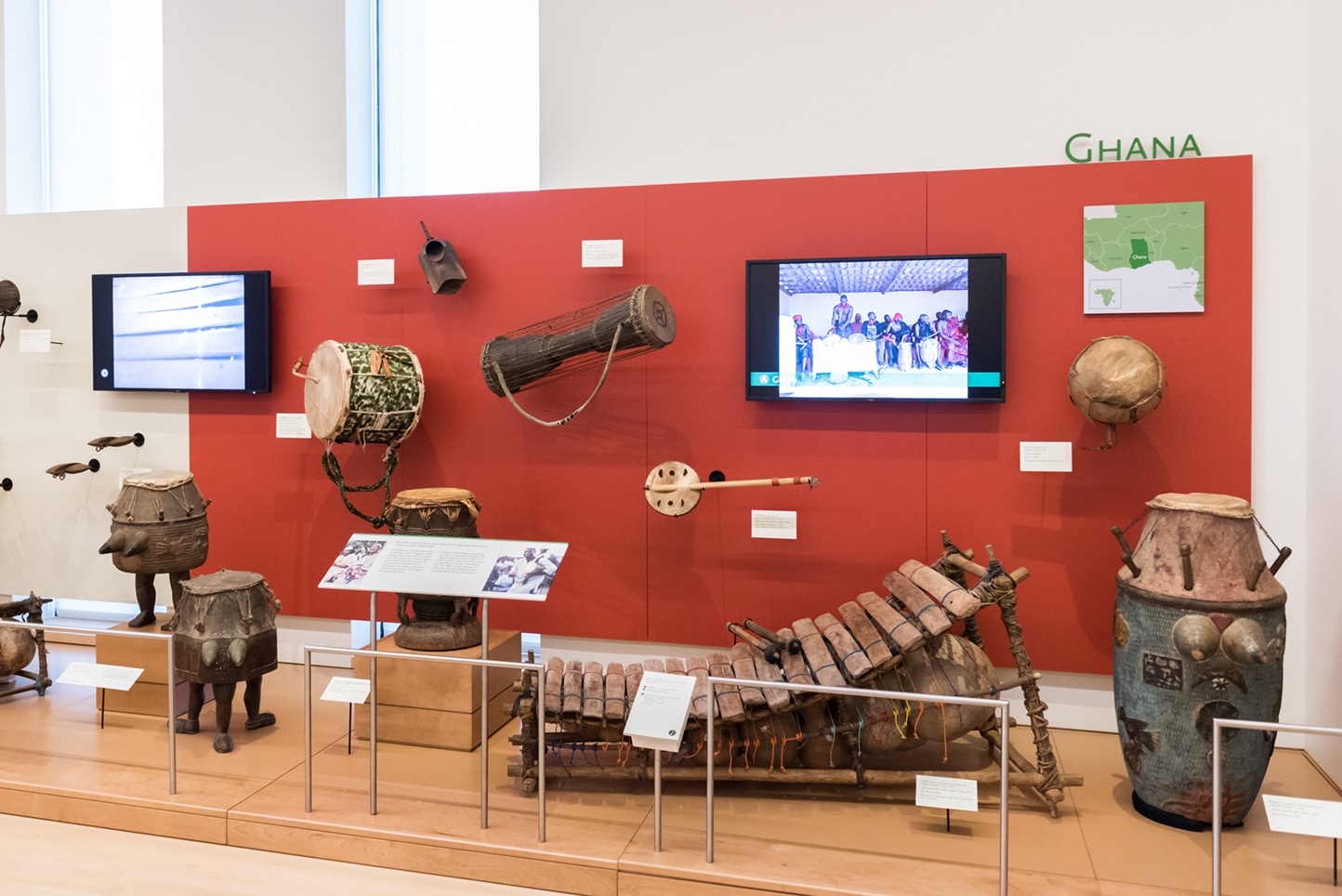 WORLDWIDE: One of the musical instrument museum’s many galleries, the Ghana display Includes a complex African xylophone, with 18 wooden keys. (Courtesy MIM)

The fan experience is equally impressive. Seats are a spacious 22 inches wide, with ample leg room and a pitch that provides an unobstructed view of the stage.

“MIM was a purpose-built facility in every regard,” said Walter. “There was the museum gallery component, but they knew it was crucial to have a world-class performance space so they carefully considered everything that could go into an ideal space.”

“Live music is a special relationship that develops and exists between an artist and the audience and that relationship is enhanced by all the qualities of that theater,” Pickett said.

MIM and the MIM Music Theater, which opened in April 2010, was designed with acoustics as a priority. Meyer Sound installed the system and tuned the room after installation to be adjustable for performers from genres including jazz, classical, rock, bluegrass and Americana.

There were 295 performances in 2019 and they are on track for the same number in 2023, including Kottke, Pancho Sanchez, Riders in the Sky, Spyro Gyra, BoDeans, blues instrumentalist Vanessa Collier and Grammy-winning trumpeter Terence Blanchard.

Surrounded by the most extensive collection of instruments in the world, the stakes are high, but so are the opportunities. American violinist Rachel Barton Pine, who plays a violin made in 1742 by Joseph Guameri, was invited to perform as part of a musical series built around an exhibit of the finest violin makers in the world. Guameri and Stradivari are considered the two greatest of all time.

The theater “does embrace and punctuate the mission of the galleries and the programming of it,” Walter said. “It’s really diverse and it does allow a lot of the MIM story to come to life in live performance.”

“The design of the room, the equipment we have in the room, the quality of the team, add that to the greatest musical instrument museum on the planet,” Pickett said. “With the world of music within those walls from every corner of the world and the symbiotic connection between the theater and what goes on in the museum elevates it to a completely different place and differentiates it from any other performance space in the country.”

Hurdles still exist, such as convincing artists, managers and agents that playing a 300-seat theater won’t affect the market or the optics for those performances. On Pickett’s short list of target performers are cellist Yo-Yo Ma and a solo acoustic blues performance by Eric Clapton. 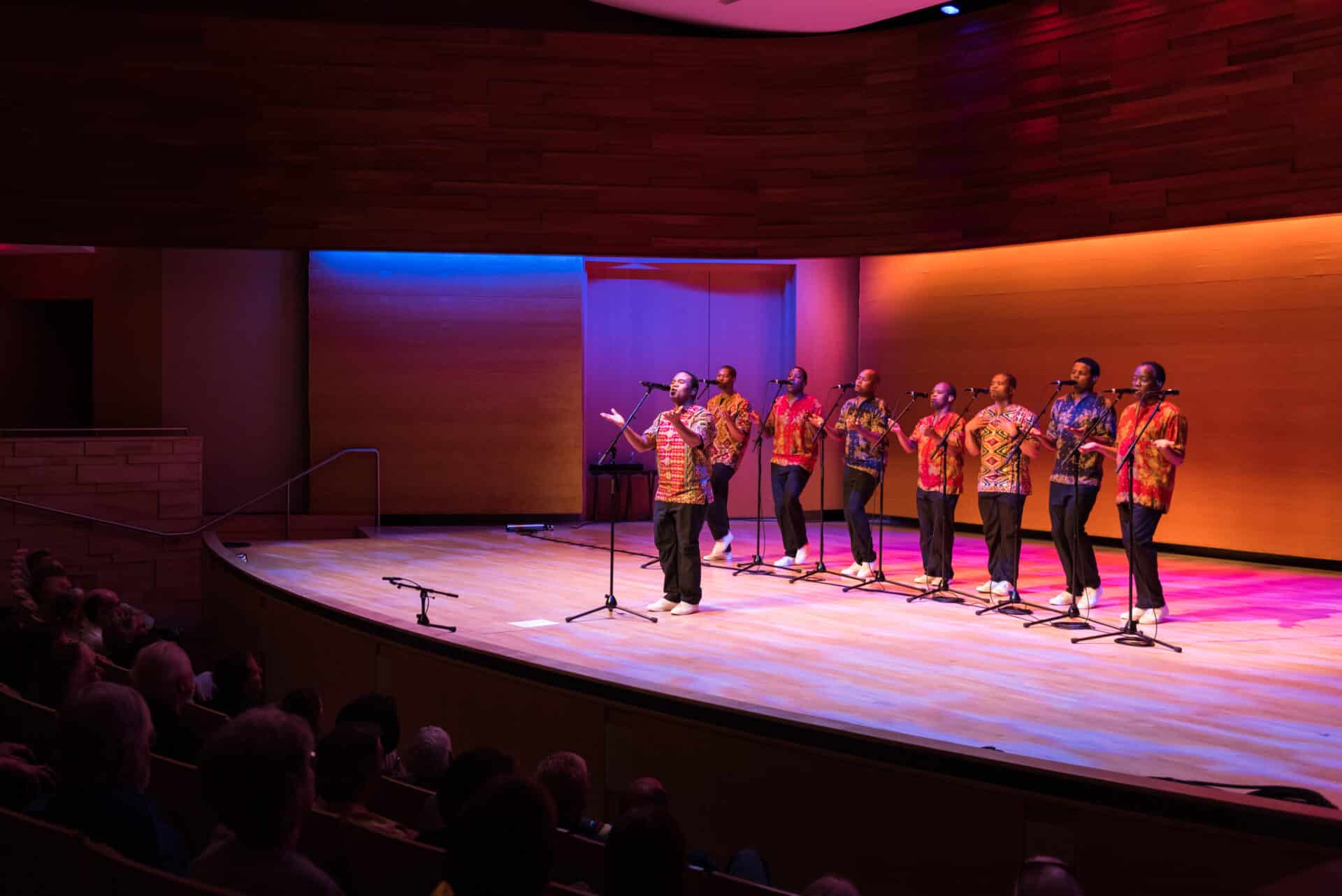 MUSIC FACTORY: Ladysmith Black Mambazo is shown playing the MIM Music Theater. The venue is attached to the Music Instrument Museum in Phoenix, which features a collection of 15,000 instruments. (Courtesy venue)

Pickett said the venue is viewed in terms of its global reach and stature, not its size. “It doesn’t draw away from any other venues,” he explained. “Phoenix is a large community with wonderful venues and performing arts centers and it’s dispersed over a large geographical area. I’ve never considered us competing with them because MIM is its own entity.”

Artists agree the MIM Theater and museum are special. “We hear from them that it’s a fun, rewarding musical experience,” said Walter. “They have been generous with the compliments. From the stage to the room, to the sound technicians and back of house, we make a lot of effort to make that experience happen.”

Picket said, “If you look around the world, there is no other place that has all of those attributes in one space and the thing that differentiates it is the quality of the theater and the relationship to the museum. When I’ve taken people through the museum, they get a sense of what this building represents. Mick Fleetwood said it was ‘like going to heaven.’ David Harrington said it was ‘like walking into the soul of mankind.’ Bob James said, ‘I’ve been in music my entire life and this place humbles me.’”