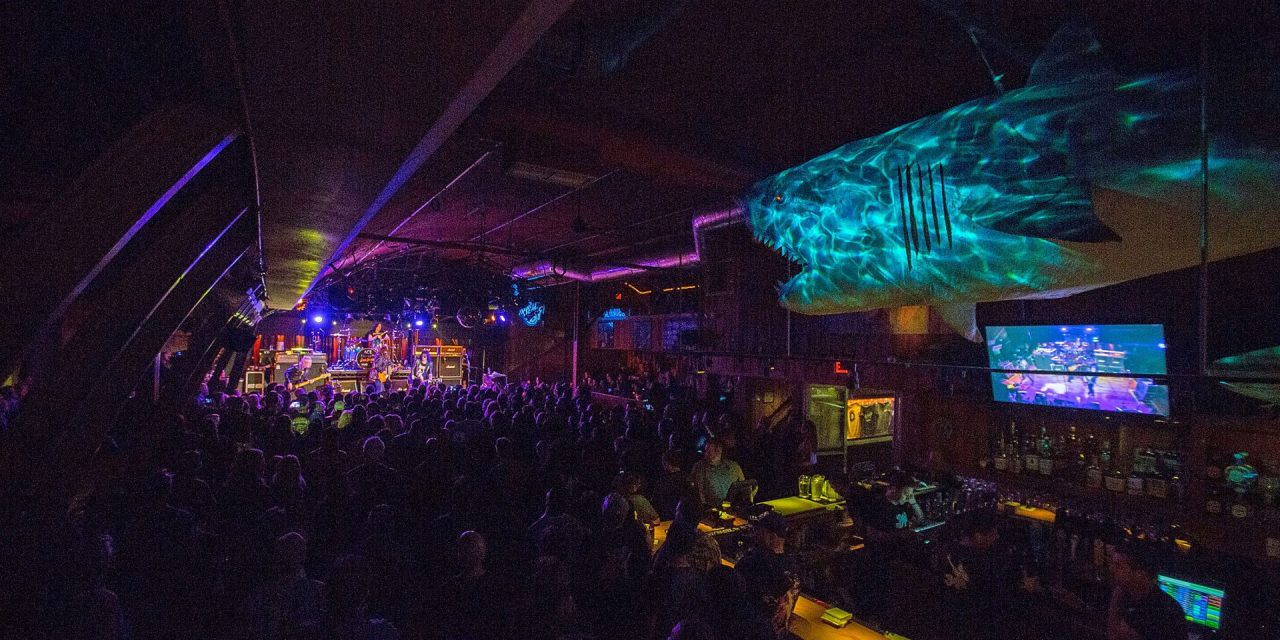 The Ace Frehley Band plays the Belly Up Tavern in 2017. (Getty Images)

Like many small clubs, the 600-capacity Belly Up Tavern in Solana Beach, Calif., outside of San Diego, has been tested by the coronavirus crisis.

To meet the challenge, the venue kicked off the SharkBelly Festival on Wednesday, a 90-day event that will grant fans access to scores of sets professionally recorded at Belly Up in recent years. Each show will cost $7.99, with proceeds supporting the venue and participating artists.

“I can’t really think of another venue that is doing it this way right now,” Chris Goldsmith, president of Belly Up Entertainment, told VenuesNow in an email. “We hear from artists all the time how much they love this venue, for the way they are treated, the audiences who come out, the beachside location, but most importantly, for the SOUND of the room. After hearing that enough times, and then listening to some of our recordings and how awesome they sounded right off the soundboard, it finally hit us that this was something that might be worth doing.”

Belly Up is making more than three dozen concerts available — an eclectic mix with artists including renowned L.A. punks X, R&B powerhouse Macy Gray, reggae legends Toots and the Maytals, and revered blues harmonica player Charlie Musselwhite — all of which were recorded live without overdubs and mixed directly from the soundboard and two room mics.

“For the price of an average concert ticket, a customer can walk away with three or four great shows,” Goldsmith said. “Also, even though we do some editing and mixing to make for a good listen, a Belly Up concert recording is not a perfect product, which is part of the charm, but we also feel that it makes sense to be priced less than a more polished studio release.”

Goldsmith has personal connections to several of the participating artists, including Musselwhite and The Blind Boys of Alabama, both of whom he produced Grammy-winning studio albums for, and Zap Mama and Antibalas, whose joint national tour he produced in 2015.

“I was able to work with the amazing vocal group Zap Mama and the funky afro-beat group Antibalas, where they didn’t just play their own sets but supported each other onstage and practically merged into one band for those few weeks,” he said. “These two artists had never toured together before, and haven’t toured together since, but the music they created together on that tour was something really special and probably no other recordings of it exist anywhere else.”

Though this batch of recordings is available for only 90 days — “Festivals have to end or they aren’t festivals, right?” Goldsmith said – SharkBelly could live on going forward, whether artists decide to leave their shows in the venue’s store or new performers participate in future iterations. Goldsmith says he sees potential to become “a cool annual event” not unlike Record Store Day. Another reason for the SharkBelly’s temporary nature: Goldsmith secured permission from all artists involved and said the 90-day duration helped “artists feel comfortable participating without feeling like they have to get married.”

Though Belly Up has faced few challenges like the coronavirus crisis since its 1974 opening, Goldsmith and the club, which is a member of the National Independent Venue Association, remain optimistic.

“All these public officials keep discouraging everybody, venues and audiences, by saying that ‘concerts’ might not happen this year,” he said. “But to those people, ‘concerts’ means seeing The Stones in a luxury box at Madison Square Garden and doesn’t necessarily mean seeing a cool show in a small space like the Bowery Ballroom or the Belly Up. Beyond the potential negative impact statements like that will have on our business when we reopen, it also shows me that public officials don’t have us specifically on their radar, so we’ve been very focused on trying to make sure the value of small concert venues, and the idiosyncrasies of venues like ours, will be considered as something distinct from large concerts.”

Small but mighty, Belly Up has continued to be a staple of Southern California’s club scene in recent years, with recent highlights including a sold-out two-night August 2018 stand by Rodrigo and Gabriela that grossed $81,920, and another sold-out two-night stand in August 2017 by X that grossed $44,162, according to Pollstar Boxoffice reports. And the Belly Up team is already eyeing ways to make up for lost revenue once venues are allowed to reopen even partially.

“What we do is too important to our communities and we need to do whatever we can to find a way to the other side,” he said. “If we’re going to have severely limited capacities then we need to find ways to add value to the customer experience and make shows work for the venue and the touring artist, both financially and experientially, at whatever capacity we’re allowed to operate. That might include streaming, it might include turning the house, it might include live recordings, but mostly it’s going to involve the same passion and creativity that got us into the music business in the first place.”

Addressing fellow venue operators and personnel, Goldsmith has a simple message: “My recommendation? Don’t give up!”

Peruse the live selections available through the SharkBelly Festival at BellyUpLive.com.