Sodexo Live! Steps Up For Final Four At Caesars Superdome 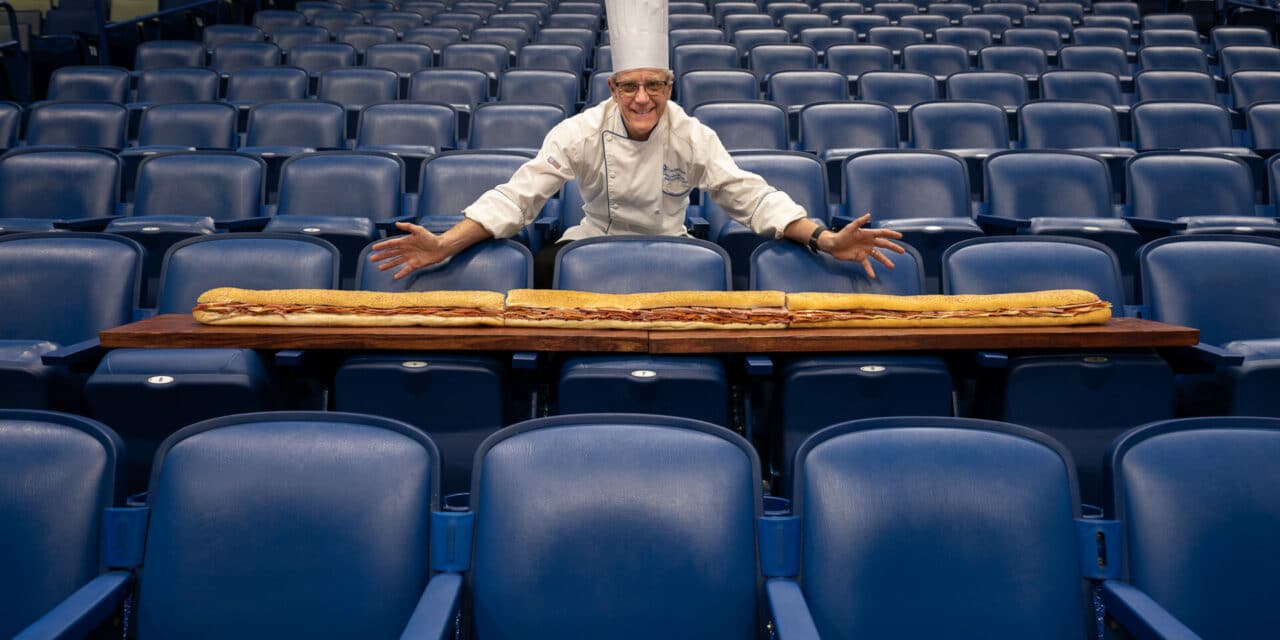 Full-Court Press: Executive chef Lenny Martinsen will be serving up a Jumbo Muffuletta Po’Boy at the Final Four. He’s pictured at the Smoothie King Center in New Orleans.

Throwing a party in a city known for an epic good time requires more than a case of beer and a couple dozen wings. For the NCAA Men’s Final Four Championship in New Orleans this weekend Sodexo Live! has ordered more than 225,000 beverage units and 13,000 pounds of chicken.

Sodexo Live! is the exclusive catering partner at the National WWII Museum, Smoothie King Center arena, Champions Square, the Ernest N. Morial Convention Center, which is the site of the NCAA Final Four Fan Fest, and Caesars Superdome the epicentral of the historic finale of the division 1 basketball season.

With diehard fanbases for Duke University, University of Kansas, University of North Carolina and Villanova University, the guest list is expected to top 100,000, well above the number of Superdome ticket holders, which is 70,000 including 8,000 additional floor seats. Diehards include country superstar Eric Church, whose Tar Heels are so near and dear to his heart that he told fans he was canceling his April 2 show at AT&T Center in San Antonio in order to catch the game.

“The team has a tremendous amount of experience in the area and have been working on this for months and months,” said Sodexo Live! SVP Susan Fink, a Duke fan, who refers to Mike “Coach K” Krzyzewski as the “godfather of college basketball.”

Fink said they will have more than 4,500 people working over the weekend with 1,800 at Caesars Superdome supplemented by hundreds of local volunteers from non-profit groups. The Final Four is a welcome boost to the area, which suffered a significant downturn in tourism during the pandemic. The Final Four in New Orleans a decade ago generated $168 million in spending, according to the state.

Sodexo Live! is serving the community in more ways than one. The company works with two dozen local non-profit organizations to help provide labor for the Superdome’s 500 point-of-sale concession areas. The chef-in-charge of the culinary full-court press, Lenny Martinsen, oversees a work-based learning program for area students who want to work in the culinary field in partnership with the National Restaurant Association. And after the final buzzer, excess food will be donated to local food banks including Second Harvest.

“It’s such reliable and essential funding for us,” said Zwila Martinez, co-founder of Social Bridges, a New Orleans non-profit that provides after-school programming to under-served communities. “And not just for us but for the families we serve who truly need it. You only get so far with bake sales and car washes. This helps raise money for trips, instrument repairs, and even to help with uniforms.”

“We are proud of our partnerships and working with the local community, giving back, and creating jobs,” Fink said.

Basketball is a game of seconds so speed and efficiency matter especially with no in-seat service at the venue. Evaluating every available hospitality space and adjusting the menu while still delivering New Orleans-inspired options took months of planning – especially in the throes of ongoing stadium renovations. 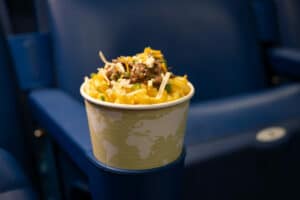 Roast Beef Debris: On tap for the NCAA basketball finals includes some NOLA mac and cheese, tapped with Goldfish crumbs and topped with roast beef.

“It is a one-hander topped with roast beef debris,” explained Kernell Jupiter, Sodexo Live! Caesars Superdome general manager. “And ‘debris’ is not a bad word when it comes to this type of piled-high roast beef.”

Designed to assist with staffing challenges, Sodexo Live! is introducing a robotic, automated pizza production Picnic station, which can produce 12-inch pies at a rate of up to 100 an hour. “We love bringing new technology to the table for fans,” said Sodexo Live! Regional VP Steve Trotter, who added that the whole process takes three minutes or less from the initial order to walking away with a pizza or slice.

Special cocktails are also part of the fan experience including the Slam Dunk Spritz ($15-$18), which Fink calls a “decadent bubbly” with champagne over ice, garnished with a dry orange wheel and fresh rosemary.

Sodexo Live! buys their seafood from Louisiana purveyors, which includes a couple tons of shrimp, and the burger patties served in the Superdome are made by local meat packers.

All that’s left is to wait for the guests to arrive. On Friday, two free events are open to the public when 25,000 people are expected to watch the teams practice followed by an All-Star game with some of the best college basketball players in the U.S. The semi-finals take place Saturday with Villanova (2) playing Kansas (1) at 6:09 PM/ET and UNC (8) playing Duke (2) at 8:40 PM/ET. The winners compete on Monday, April 4, for the championship.

And when it’s over, Fink, Trotter, and Jupiter say they will be celebrating with the Sodexo Live! team, vendors, and partners who made it happen.

“They really are the team behind the teams and we are prepared to put on a great show,” said Fink.