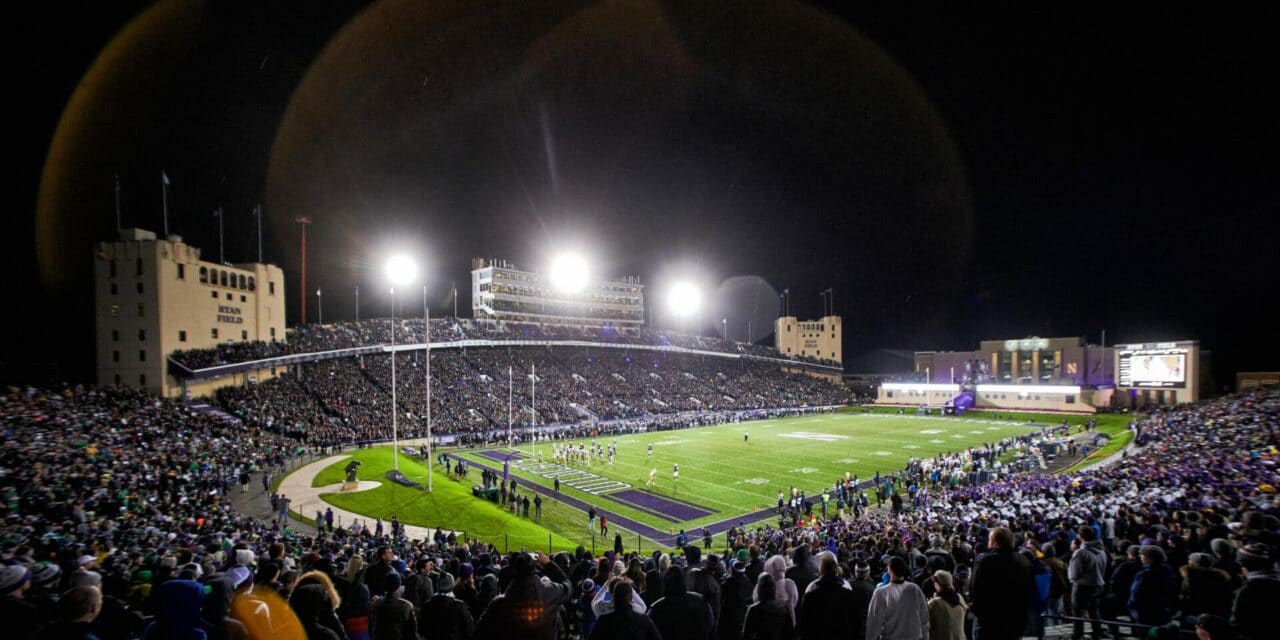 Ryan Field, seen here during the Notre Dame-Northwestern night game in 2018, will undergo a major reconstruction project over the next several years. (Getty Images)

Funding in place through $480 million gift

Sports architect HNTB has amassed an impressive portfolio of Big Ten Conference football stadium renovations over the past 20 years, designing upgrades for seven schools — half of the league’s total members.

In an email, Alex Darragh, Northwestern’s vice president of facilities, said at this time, the school could not discuss the status of the project.

The exact scope of the project and timeline have not been determined, sources said, and a general contractor still needs to be hired. Construction will take place over multiple years.

The stadium currently has 47,000 seats but that number could be reduced to 40,000 as part of the project, sources said.

Northwestern does not typically fill the building to capacity from its own fan base but draws a large number of visiting fans for home games against Iowa, Wisconsin, Michigan, Ohio State and Nebraska.

The rebuild of Ryan Field will reshape the stadium and bring it up to date with the Ryan Fieldhouse and Walter Athletics Center, Northwestern’s gleaming $270 million practice facility that opened in 2018 along Lake Michigan. Perkins & Will designed the 420,000-square-foot practice facility.

For reconstructing the football stadium, funding is in place after the family of Patrick and Shirley Ryan donated $480 million for the project, a gift announced in September. School officials said they would raise additional funds for the project from other donors.

Ryan Field and the practice facility are both named for the Ryan family.

Patrick Ryan, chairman of the school’s board of trustees, paid $8 million for stadium naming rights in 1997. The change in name from Dyche Stadium came at the time the stadium went through $30 million in upgrades.

The refurbishments included club seating, a new press box, new concessions and restrooms. In addition, the concrete seating bowl was repaired and the playing surface switched from artificial turf to natural grass.

No other significant improvements have been made over the past 25 years.

HNTB has completed some landmark renovations in the Big Ten. The most noteworthy project was the $226 million expansion of Michigan Stadium completed in 2010 that added a suite tower with 83 suites and 3,200 club seats.

At Ohio State, the architect designed two renovations at Ohio Stadium, including a $42 million facelift in 2019 that introduced loge boxes, with a big focus on reinforcing the infrastructure at the venue that opened in 1922.

At the University of Iowa, HNTB teamed with local firm Neumann Monson Architects on two projects at Kinnick Stadium totaling $180 million. The first one, completed in 2005-06, covered a rebuild of the south end zone and a suite tower spanning the west sideline with 47 suites and more than 1,000 club seats.

Three years ago, the stadium’s north end zone was renovated  and a new indoor club was built, tied to 1,600 indoor outdoor premium seats.

The architect has also designed renovations to football stadiums at Illinois, Michigan State and Purdue.