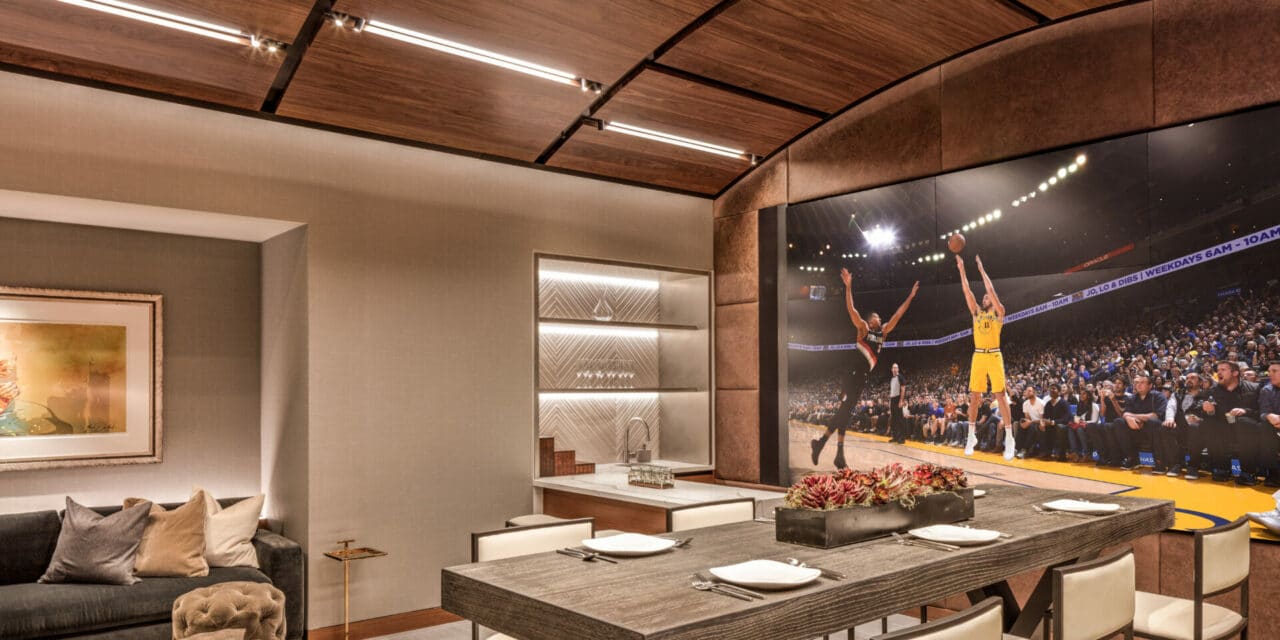 The Golden State Warriors have re-tooled their suite resale program at Chase Center with plans to expand it to other teams and venues, according to John Beaven, the team’s executive vice president of ticket sales and service.

Suite Xchange, a software program in which prospective buyers and sellers negotiate suite transactions for single events, including NBA games and concerts, has been operational for several weeks now and the feedback has been positive for those using the platform, Beaven said.

The Warriors believe there’s nothing like it in pro sports in terms of its functionality and features compared with typical resale sites such as StubHub and Vivid.

“We feel this is unique, given the suites and price points,” Beaven said.

In San Francisco, SuiteXchange inventory covers all 44 suites at Chase Center, including the courtside lounges that sell for $2 million a season for those leasing those products on long-term leases.

The Warriors collect a 5% fee for every suite resale transaction. There will be a revenue share agreement between the Warriors and other teams and venues using the system. In turn, those parties could charge fees to their respective suite holders, Beaven said.

The technology, accessible for both desktop computers and mobile devices, gives prospective buyers the ability to search for available suites by specific event. Those using the system create an account to access the platform. Upon selecting the event, suite inventory appears with pricing and a seating map identifying the location at Chase Center. All suite rental documents are included in the system.

Beaven said the point of separation is the negotiation piece between buyer and seller, in addition to giving the seller the option of posting images and video of their suite, an upgrade over the standard secondary market sites reselling premium inventory.

“If someone has a suite listed for $20,000, that seller may want that amount of money, but may be willing to accept less, so we added in a ‘make an offer’ feature in which a potential buyer can bid below the asking price,” he said. “That offer goes to the seller and they can accept the bid or reject it and set a floor, so they’re not getting bids below what they’re willing to accept.”

“It creates an environment where a buyer and seller, in essence, anonymously negotiate the price of a suite and hopefully come to an agreement,” Beaven said.

The suite resale program initially kicked off for the Warriors’ 2019-20 season, the team’s first year at Chase Center, their $1.6 million arena privately funded by team co-owners Joe Lacob and Peter Guber. It performed well but team performance coupled with the abrupt halt to the regular season due to the pandemic led the Warriors to take a step back to re-evaluate what they had and what their vision was long term for the platform, Beaven said.

Through more research, the Warriors partnered with Arc XP technology to re-engineer the platform to include a new feature in which potential buyers can make an offer to suite holders during the online transaction process.

Arc XP, an e-commerce technology platform, is a division of the Washington Post, which is owned by Amazon founder Jeff Bezos.

The suite resale program was driven by the Warriors recognizing suite holders’ need to rent their suites for events they weren’t going to be attending at the arena.

At Oracle Arena, the team’s former home in Oakland, reselling suites was prohibited, Beaven said.  As the Warriors started building Chase Center and had conversions with potential suite holders, they realized there were greater expectations in today’s economy for those customers to have an opportunity to re-sell their suites for individual events.

“We shifted to a place where resale was non-existent to a place where we’re actively trying to support our suite holders, knowing that it’s important for them to have this outlet,” he said. “I compare it to where ticket resale was in the early 2000s. It’s shifted from behind the scenes activity to out front, creating legitimacy and security for transactions.” 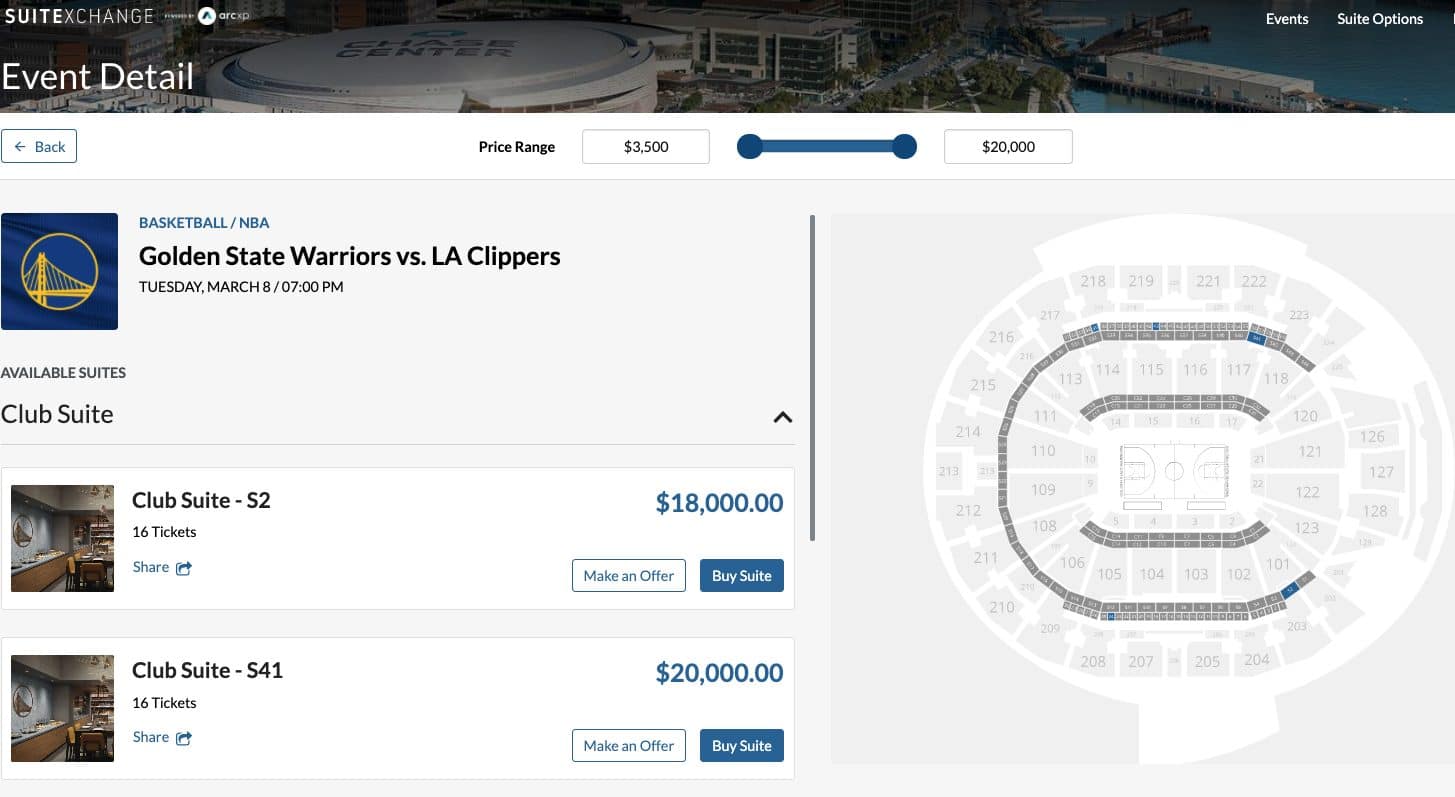 To this point, no deals have been signed with other teams.

“There is clearly a resale market for suites and those teams that deny this are putting their head in the sand, especially come renewal time,” said Bill Dorsey, chairman and founder of the Association of Luxury Suite Directors, an industry trade group.

The Warriors’ goal is less about how to generate revenue from suite resale but provide additional value for their highest-paying customers and provide more incentives for them to remain with the team long term, he said.

“When we initially launched the program, it was just built for Chase Center specifically and was not scalable,” Beaven said. “We surveyed the landscape and decided to make the investment and build something for our suite holders. Then we realized a gap in the marketplace we could fill with a product to serve all venues.”

Long term, the Warriors believe SuiteXchange could be the go-to site for suite resale in the sports and entertainment industry.

“Our vision is to add as many teams and venues as possible, driving the marketplace where buyers know there’s a one-stop resource,” Beaven said.