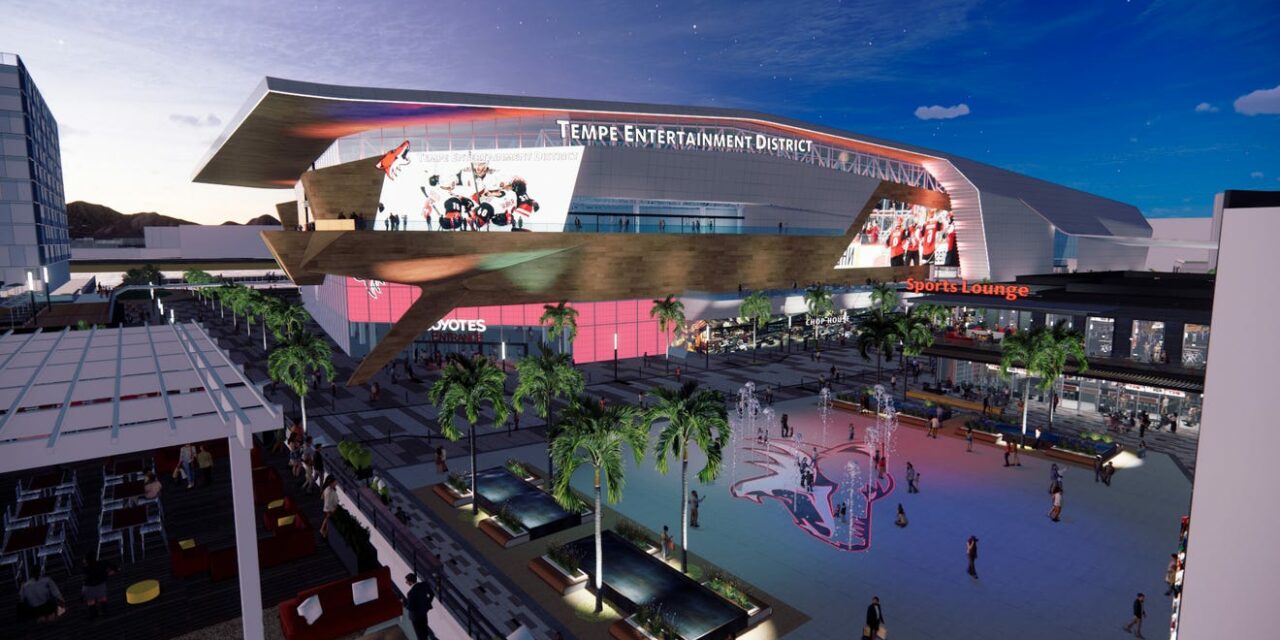 A rendering released in September, produced by Gensler, shows an arena proposed by the Arizona Coyotes to anchor a mixed-use district in Tempe. (Courtesy team)

Project up for approval by Tempe City Council

The Arizona Coyotes don’t officially have a place to play next season and reportedly don’t have enough political support to build a new arena in Greater Phoenix, but they have selected an architect to design an NHL facility.

Manica Architecture, a relatively small Kansas City practice, was recently chosen by the team to help develop an 16,000-seat seat arena proposed as part of a $1.7 billion mixed-use project in Tempe, according to industry sources.

No contract has been signed between the Coyotes and Manica Architecture, sources said.

The Coyotes had no comment, said Rich Nairn, the team’s executive vice president of communications and broadcasting.

In an email, David Manica said he could not comment after signing a nondisclosure agreement.

Gensler and Populous were the other two finalists for the Coyotes’ project. In September, renderings were released publicly for what the arena could look like, produced by Gensler, sources said.

David Manica has been on his own for 14 years after spending 13 years at Populous. He’s built a reputation as a bold designer creating flashy arena and stadium exteriors, but he also plans the nuts and bolts of a building.

Manica Architecture has 13 employees as listed on the company website. Manica often teams with a larger sports firm to complete construction documents midway through a project.

At this point, it’s unknown which architect Manica may pair up with in Tempe.

Most important, it remains unclear whether the project will move forward under the team’s current plan.

The Tempe City Council must approve the project for it to move forward. There are three yes votes, two no votes and two votes that are undecided, local media outlet gophnx.com reported.

The Coyotes were the only group to submit a proposal per the city of Tempe’s plan to redevelop 46 acres spanning two parcels of city-owned property.

If the Tempe proposal falls through, the Coyotes could potentially turn to the Salt River Pima-Maricopa County Indian Community to build a new arena on tribal land, gophnx.com reported.

Meanwhile, the Coyotes must find a new venue to play for at least the next few years after officials with the city of Glendale, Arizona, owner of Gila River Arena, said they would not extend a lease agreement with the team after the current season. The arena has been the Coyotes’ home since December 2003.

“The Coyotes are going down their own path now and making other arrangements,” Dale Adams, general manager of Gila River Arena, told VenuesNow.

Their options include Chase Field, home of the Diamondbacks; Arizona Veterans Memorial Coliseum, built in 1965 and which can hold about 14,000 for hockey; and a new 5,000-capacity arena in Tempe, future home of Arizona State University hockey, set to open late this year.

It’s the newest chapter in the Coyotes’  saga. In December, they were threatened with eviction by Glendale officials for $1.3 million in unpaid rent and taxes. The team later paid those bills, local media reported.

The Coyotes are owned by entrepreneur Alex Meruelo and investment banker Andrew Barroway.

Under former owner Jerry Moyes, the Coyotes filed for bankruptcy in 2009. The NHL ran the team for four years before a group of Canadian businessmen acquired the Coyotes in 2013. Four years later, they sold to Barroway.