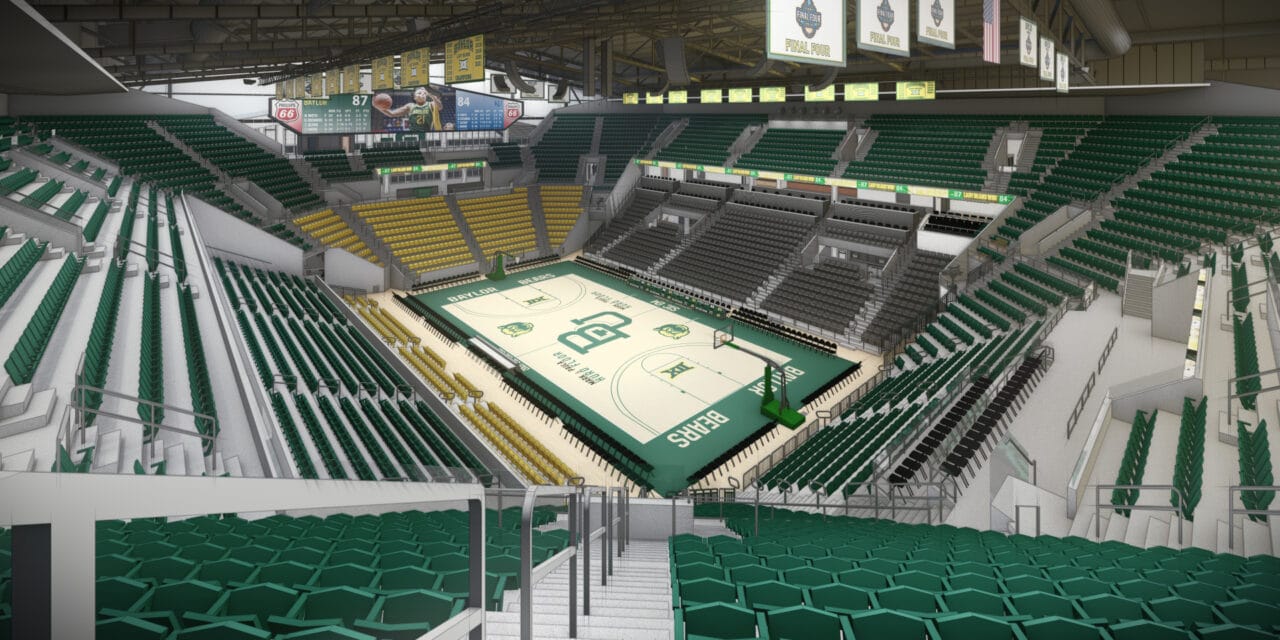 Kansas City-based AECOM is the architect for the $185 million Foster Pavilion that will sit along the Brazos River, across Interstate 85 from McLane Stadium, the school’s football venue.

Groundbreaking for the 7,500-capacity arena is set for this spring with the expectation that it will open for the 2023-24 college basketball season, said Jon Niemuth, AECOM’s director of sports for the Americas.

AECOM has been involved in the project since the fall of 2017, waiting for the school and the city of Waco to find the right site to build the arena and come with a plan to finance it.

In December, city officials announced they had reached a deal with Baylor to move ahead with the project through a complex deal involving land shared by the city, the school and a private developer.

The arena’s official name, Paul and Alejandra Foster Pavilion, reflects the $100 million lead gift they provided in 2019 to help pay for the project. Paul Foster is a 1979 Baylor graduate.

As part of the agreement, the city has committed $65 million for arena construction in exchange for the rights to book concerts and other non-basketball events at the facility. Baylor is responsible for funding the balance of the project through private donations.

The city’s investment will come from tax-increment financing connected to a larger mixed-use development surrounding the arena to include housing, a new hotel, retail shops, restaurants and a parking garage.

The mixed-use piece is underway. After tearing down an apartment complex, construction on one restaurant and the parking garage started in early 2020 before taking a “COVID pause,” but it should be completed later this year, Niemuth said.

Foster Pavilion itself will serve as an anchor for future development as Baylor moves from Ferrell Center, the school’s 34-year-old arena.

The existing venue, a dome-shaped building, has 10,000 seats, bigger than the planned arena. But Ferrell Center’s sideline seats are pushed far back in the bowl, said Greg Brown, AECOM’s principal and design lead, providing suboptimal views for watching college basketball.

By comparison, renderings of the new arena feature a completely different geometry. A tight seating bowl hugs the court with multiple premium seat options and 850 student seats along the east sideline and south baseline.

“It’s a smaller building in direct response to Baylor conditions,” Brown said. “Waco is not Dallas or Austin. It has its own unique place in the conference. It was important to (Athletic Director) Mack Rhoades that we provide the right solution for Baylor with a home court advantage for the men’s and women’s teams.”

The goal was to take the simple structural expression, natural light and steep seating rakes from historic college basketball venues such as Hinkle Fieldhouse, Allen Fieldhouse, Cameron Indoor Arena and The Palestra and combine those elements with premium seats, end zone videoboards and other modern amenities to make up Foster Pavilion.

The new arena will have about 7,000 fixed seats with 500 standing spaces. There are 160 courtside seats and 720 club seats, both connected to club lounges, 70 loge box seats and a single, 24-seat university suite. Ferrell Center had very little premium seating, Brown said.

The matching end zone screens measure 1,850 square feet and will be customized to fit the arena profile.

Underneath those boards will be space for fans to hang out and watch the game, similar to the terraces at the Pavilion at Ole Miss, designed by AECOM and which opened in 2016.

At Baylor, there were several discussions over whether the arena should have a center-hung videoboard like most basketball venues. In the end, the decision to forego that feature provides a point of difference for the building.

In that respect, it’s similar to Fertitta Center, the University of Houston’s basketball arena. AECOM designed the $60 million renovation of that facility that was completed in 2017.

“One thing that will make (Foster Pavilion) instantly visible is the lack of a center-hung,” Niemuth said. “If you want to get great value and focus on a cool basketball experience, why spend all that money on a center-hung when we can keep the ceiling low and the sightlines open?”

As part of the arena development, there will be a practice facility with team spaces and a 12,000-square foot gym.

Foster Pavilion was designed to be multipurpose. Capacity will be 6,000 for end-stage concerts. There are four loading bays and the intimate seating bowl should provide a great fan experience for small shows, Brown said. 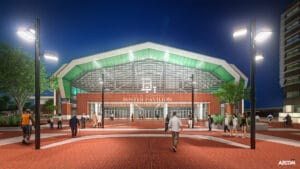 After the new arena opens, Ferrell Center’s locker rooms, practice courts and conditioning spaces will be freed up for volleyball and Baylor’s acrobatics and tumbling programs. Whether the older arena will be reconfigured for other sports has not been determined, but it will remain an athletics resource, according to school officials.

Baylor is the latest Texas university to upgrade its basketball venue. Moody Center, the new University of Texas arena, opens in April. Texas Christian and Houston have renovated their arenas over the past seven years.

Apart from Foster Pavilion, AECOM is designing the Fudge Football Operations Center, a new 100,000-square-foot facility. The $65 million project breaks ground this summer and is a key piece of developing a comprehensive football campus for Baylor, Niemuth said.