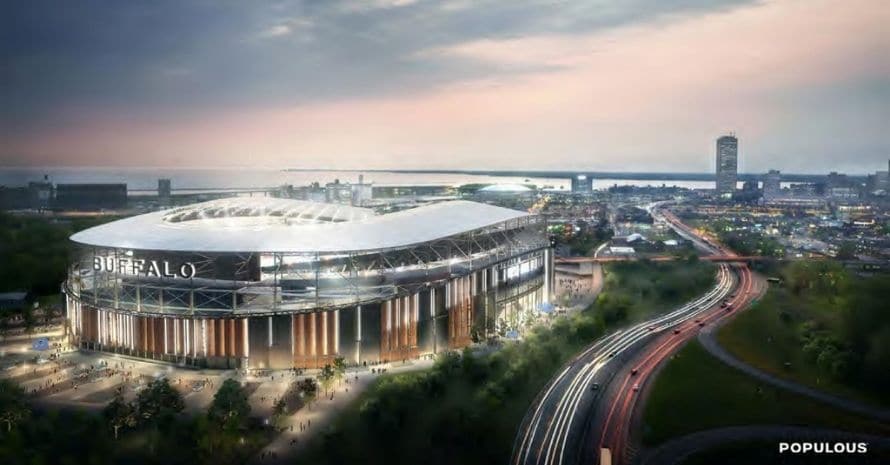 In December, the Empire State Development Corp., with permission from the Buffalo Bills, posted the results of a 2019 study produced by CAA Icon and Populous examining three proposed sites and estimated project costs for a new NFL stadium in Buffalo. This rendering included in the study shows the South Park site on the edge of downtown with an estimated cost of $2 billion. (CAA Icon/Populous)

The sports architecture industry is bursting with activity in 2022 as design firms compete for a lengthy list of projects in the professional and college ranks, both in new builds and upgrades to revitalize arenas and stadiums.

As the year unfolds, the most intriguing aspect is the ripple effect over last year’s shakeup at HKS, a designer of NFL and Major League Baseball facilities, and how those moves could affect the industry moving forward.

Under the leadership of Bryan Trubey, founder of HKS’ sports practice in 1992, the Dallas-based firm developed four of the last six new NFL stadiums for the Dallas Cowboys, Indianapolis Colts, Minnesota Vikings and the Los Angeles Rams and Chargers.

Trubey became the face of HKS over the past 30 years and turned it into a major force apart from the crowded Kansas City sports design community. In a surprise move, Trubey left the company in June and joined Overland Partners three months later. John Hutchings, a 35-year principal at HKS who worked on most of those NFL jobs, followed Trubey out the door and joined him at Overland, along with a half-dozen other designers and support staff.

Those sudden departures have some wondering whether HKS’ prominence in the NFL could be coming to an end as the Buffalo Bills, Washington Football Team, Carolina Panthers and Chicago Bears all prepare to build new stadiums over the next decade.

Populous, once the go-to firm for NFL stadium design in the 1990s and early 2000s, appears to be the leader in the clubhouse for the Bills, WFT and the Panthers projects, according to multiple sources.

No official announcements have been made regarding architects for those three stadium developments. 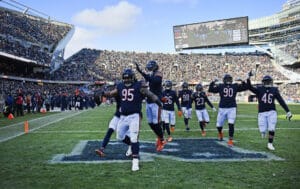 The Chicago Bears could potentially move from Soldier Field in Chicago to a new stadium built at the old Arlington International Racecourse in the northwest suburbs. (Getty Images)

The Bears are pursuing a move to Chicago’s northwest suburbs after playing 100 years in the city at Soldier Field and Wrigley Field. There’s no update on an architect selection, said team spokesperson Meghan Bower.

HOK is thought to be out front on that project after designing the $100 million renovation of Halas Hall, the team’s headquarters and practice facility in Lake Forest, Illinois. Those upgrades were completed in 2019.

“You won’t see any big changes with the way we work,” Williams said shortly after Trubey’s exit. “There’s a small group of us that from its infancy helped build the practice. In a lot of ways, that group has been manning the ship. The transition has been fairly smooth.”

But it looks like a transition is in the works for designing NFL venues, sports’ most expensive building type.

Populous has not designed a new NFL venue since Cardinals Stadium, now State Farm Stadium, opened in 2006 in Glendale, Arizona.

It has stayed active in the NFL, planning renovations to, among others, the Bills’ Highmark Stadium, Heinz Field, Levi’s Stadium and TIAA Bank Field, as well as a retrofit of Bank of America Stadium for Major League Soccer expansion team FC Charlotte, owned by Panthers’ owner David Tepper.

For the Washington Football Team, Populous is in line to serve as architect of record in teaming with Moody Nolan, a Columbus, Ohio minority-owned firm, and Bjarke Ingels Group, a team consultant the past five years.

As architect of record, Populous would be responsible for technical documentation and less on big ideas design, sources said.

It wouldn’t be the first time the two firms have worked together in sports. Populous and Moody Nolan have teamed in the past to design renovations to college arenas at Ohio State and the University of Cincinnati.

Troy Sherrard, a principal with Moody Nolan and leader of the firm’s sports and recreation design group, did not return a phone call for comment.

In Buffalo, the team interviewed about a half-dozen firms to select a stadium architect shortly before the holiday break, sources said.

Given Populous’ input to date, it appears to be their project to lose. The firm has a leg up on the competition, starting with Scott Radecic, the former Bills linebacker now in charge of the firm’s NFL practice.

Eight years ago, the firm designed $130 million in upgrades to 49-year-old Highmark Stadium.

In late December, Empire State Development, the Bills’ landlord at Highmark Stadium, posted the results of a 2019 study completed by CAA Icon and Populous that examined three proposed sites for a stadium and estimated project costs. The Bills hired CAA Icon as owner’s representative for stadium development.

In the Southeast, the relationship between Populous and Tepper Sports and Entertainment extends to designing the Panthers’ new headquarters and practice facility in Rock Hill, South Carolina.

The Bears are going through the process of acquiring Arlington International Racecourse in Arlington Heights, Illinois to build a new stadium on the 326-acre site, connected to a retail and entertainment district.

Jones Lang LaSalle has been engaged with the Bears to serve as owner’s rep for the Arlington Park stadium project, sources said. Jim Renne, Jones Lang LaSalle’s national director of sports and entertainment, said he could not confirm that information. The firm filled that role for the $660 million renovation of Soldier Field in the early 2000s.

HOK designed Mercedes-Benz Stadium in Atlanta, one of two NFL venues HKS was not involved in over the past 15 years. In addition, HOK planned the $600 million makeover of Hard Rock Stadium in south Florida, showcasing some of the nicest premium spaces in sports.

In general, turnover among sports architecture firms is nothing new. It’s like any business that goes through generational cycles. Veteran designers retire, paving the way for new blood to take over as firms compete for projects at the highest level of sports.

The tricky part is balancing that turnover in personnel while properly managing sports facility development from start to finish over multiple years.

“As long as these things take from conceptualization to getting built, there is so much that changes that you’ve got to be able to design in flexibility of what’s going to ultimately be the future,” Renne said.

“That’s tough to forecast,” he said. “As an owner’s rep, how do you create cost certainty forecasting five years into the future about what you’re constantly trying to develop today. That’s the biggest challenge for any architect, to prepare team owners to ride through that process.”