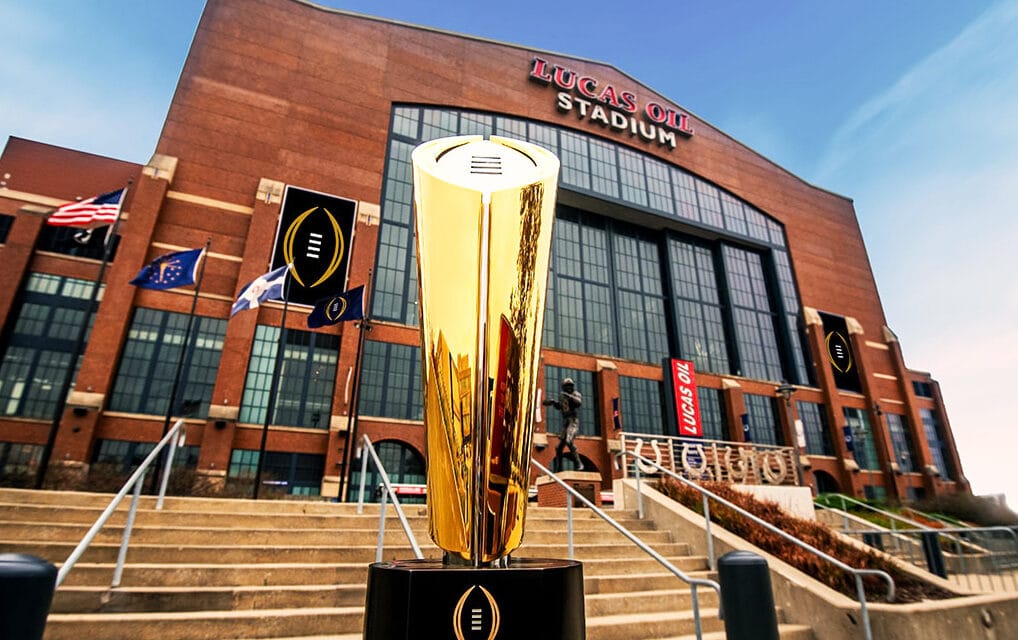 Concessionaires have been the hardest hit businesses in sports and entertainment during the pandemic. As the coronavirus rages on, they’re using every resource possible to maintain staff and keep product flowing to resolve shortages in labor and food and drink supplies.

Sodexo Live!, the food provider at Lucas Oil Stadium, is one example.

The company, formerly Centerplate, has pulled out all the stops to provide enough manpower to meet the demands of Alabama and Georgia fans attending Monday’s 2022 College Football Championship title game in Indianapolis.

The vendor also runs the food at the Indiana Convention Center next door, where Playoff Fan Central, the CFP’s version of fanfest, will take place.

Yogi Stephens, Sodexo Live!’s general manager at the NFL stadium, said he’s lined up more than 2,000 hourly workers to handle the massive event. The game is expected to be filled to capacity with 70,000 fans. It’s the first time Lucas Oil Stadium has played host to the event.

All told 100,000 people are expected to travel to Indianapolis for a three-day weekend, culminating in championship game.

“We’re in good shape,” Stephens said. “We have backup. With all the support we have coming to town from across all Sodexo properties, plus hourly, salary and nonprofits, we’re confident about the operation.”

To meet that challenge, the company brought in 49 new nonprofit groups to run the stadium’s 137 concession stands, a number that dates to the Indianapolis Colts’ first NFL preseason game on Aug. 15 and continuing through Jan. 2, the Colts’ final regular-season home game.

Sodexo Live!, similar to other concessionaires, use nonprofits to work 100% of concessions, including beer stands, and pays those groups a percentage of sales after each game.

“Our goal was to be at 55 new groups this season and we hit 49,” Stephens said. “We lost quite a bit over the course of last season. We have six left from last year.”

In addition to using local youth sports teams, school and church groups, the food vendor extended its reach this season to Chicago, Cincinnati and Louisville to find more nonprofits to fill the void left by the significant turnover.

Those groups are supplemented by hires through temporary work agencies and others from Sodexo Live! accounts at the Indiana Convention Center, NCAA Headquarters and Hall of Champions, TCU Amphitheater at White River State Park, Lucas Oil Indianapolis Raceway Park and the Indianapolis Zoo.

To attract more nonprofit participation during the pandemic, Sodexo Live! increased its payout to those groups from 9% to 12% for selling food items and 9%, up from 7%, for selling alcoholic beverages, Stephens said.

In the premium spaces, Sodexo Live! has streamlined its menu options for the CFP title game.

For those megaevents, it’s a standard procedure anyway, but the ongoing supply chain issues have put a greater focus on simplifying that piece of the operation, according to Stephens.

“We work with 17 suppliers, seven locally,” Stephens said. “When we order chicken wings from our normal vendor, sometimes they’re out of stock and we have to go through (up to) six options to get that item.”

Despite those reductions, the obligatory specialty items branded for the respective schools remain part of the food service flair.

The Crimson Tide Dog, branded for Alabama, is a quarter-pound hot dog grilled and topped with pulled pork and spicy BBQ sauce made with Dr Pepper, which is a major sponsor of the College Football Championship.

For Georgia fans, the Bulldog Shrimp Tacos are made with Cajun grilled shrimp and grilled peaches.

Four days before the game, concession pricing had not been established but those two items will most likely cost $12, said Paul Pettas, Sodexo Live! spokesman.

There will be no mobile ordering for the game, Stephens said.

Lucas Oil Stadium has been a cashless operation since reopening its doors for fans in 2021. Reverse ATMs are in place for those fans holding cash to convert that currency to a Visa gift card to use at concession stands.

Those ATMs get little use, falling in line with the industry trend as cashless becomes the norm at sports venues. For a typical Colts game, those machines issue about 1,200 gift cards among the average crowds of 55,000, Stephens said.

As football season at Lucas Oil Stadium draws to a close, Stephens said he had learned that the most important thing to keep in mind is patience and to have multiple plans in place to resolve staffing and product issues.

“Stay positive,” he said. “For those afraid of the unknown, it’s still just hot dogs and beer.”