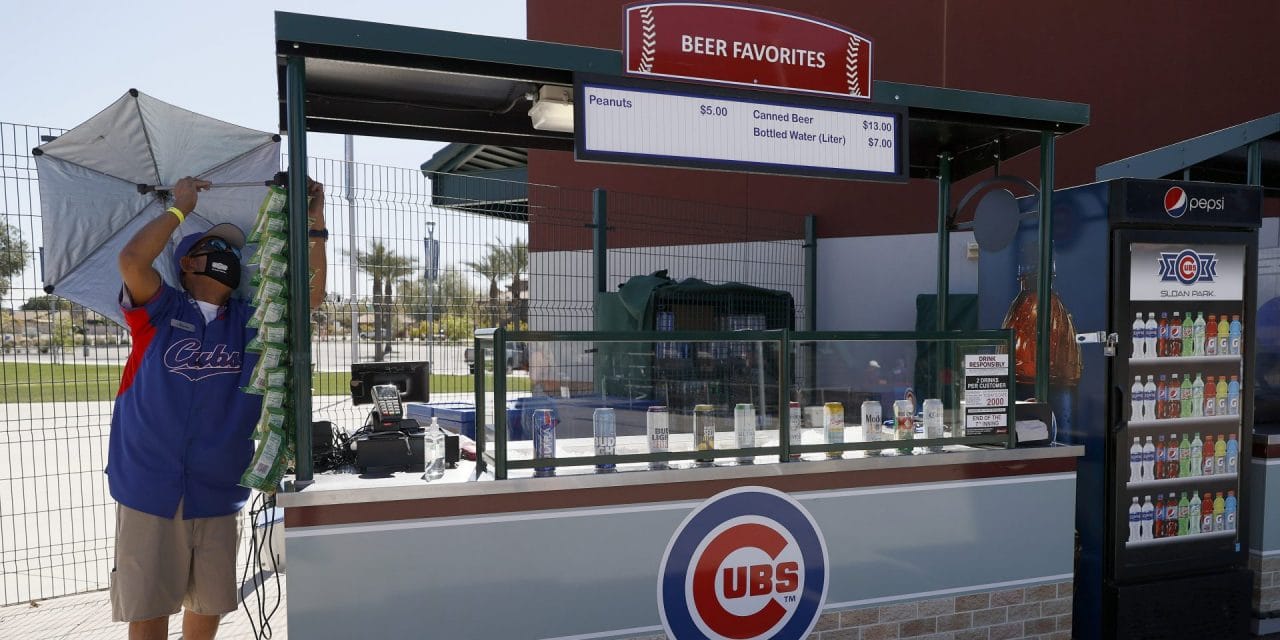 Sloan Park and Hohokam Stadium are both in Mesa; Salt Rivers Fields is in Scottsdale.

“We’re open. You gotta start somewhere,” said Satenspiel, Spectra’s senior vice president based in Scottsdale. “The crowds and the vibe has been really great. It’s good to smell the grass and play ball.”

For the Cactus League, health and safety protocols have restricted crowds in the range of 2,000 to 2,400 fans. About two weeks into spring play, there’s a scarcity of tickets and some days, such as Mondays, are stronger than during a typical season, Satenspiel said.

Still, per capita spending is up 7% over last season across the three spring training facilities due to shorter lines with fewer people in the parks and menus that have been streamlined to accelerate speed of service. Most concession stands are open but with points of sale cut in half to maintain social distancing among Spectra workers, Satenspiel said.

All three parks are cashless now. Mobile ordering tied to QR code technology is in place at all three venues. Venuetize is in place at Sloan Park. Hohokam Stadium and Salt River Fields both use Bypass.

Sloan Park has reverse ATMs for holdouts that still pay with cash. Those machines aren’t available at Hohokam Stadium and Salt River Fields. Spectra can offer a loaded ticket with stored value if someone only has cash, he said.

The food trucks featuring local brands that set up beyond the outfield fences at Sloan Park and Hohokam Stadium are gone this year. Spectra, in conjunction with the teams, felt they couldn’t control social distancing in that free-stranding space.

At all three venues, the grass berms, which in the past were filled with families sitting on blankets, now have chalk lines in circles and squares for social distancing purposes.

Group decks and picnic areas, a big piece of the spring training experience, have been reduced significantly to conform with the protocols. The same is true for the suites, which in some cases, patrons must remain outside of the indoor lounges, Satenspiel said. For those areas, it’s mostly pre-packaged meals now.

Spectra had 75% of its spring training workers return this year, which falls below the 95% rate of past seasons. But these days, with operations not fully 100%, fewer staff was needed across the three parks, Satenspiel said.

As part of the new protocols, Spectra employees are required to complete a questionnaire every day before coming to work. They must answer 10 questions tied to their health situation. At the ballpark, they wear masks, gloves and face shields depending on their duties.

The teams bear the primary responsibility for enforcing face coverings for all patrons at spring training games, but all aspects of facility operations play a role, including Spectra.

“We’ve got the mask police walking around the building making sure fans are wearing them,” Satenspiel said. “It’s tough because you get that false sense of security being outside. You think you don’t need a mask, but you’re still (close) to people. It’s not an easy thing to control.”

All of the additional moves come with increased costs and less gross revenue to Spectra. The vendor works with its clients to adjust the business model. Every building is different, but with the same goal to provide a safe environment for fans, staff and players.

“At this point, this is the reality of what we’re dealing with today,” Satenspiel said. “We put a great game plan in place to control traffic flow. It’s up to us. If I have an employee that’s not happy, it impacts the experience.”

As the regular season approaches, Satenspiel has developed four to six business models tied to capacity for each of the company’s roughly two dozen minor league baseball accounts across the country.

“I put those financials together today and tomorrow we’re back to square one,” he said. “I’ve spent more time creating models for 10%, 25% and 50%, and then adjusting them because of what we find out every day.”

“Does catering even exist?” Satenspiel said. “Hospitality is an important piece of minor league baseball. Are companies still interested in it? There’s a lot of layers to this onion that need to get peeled back.”