Tailgating With a View and Some Style 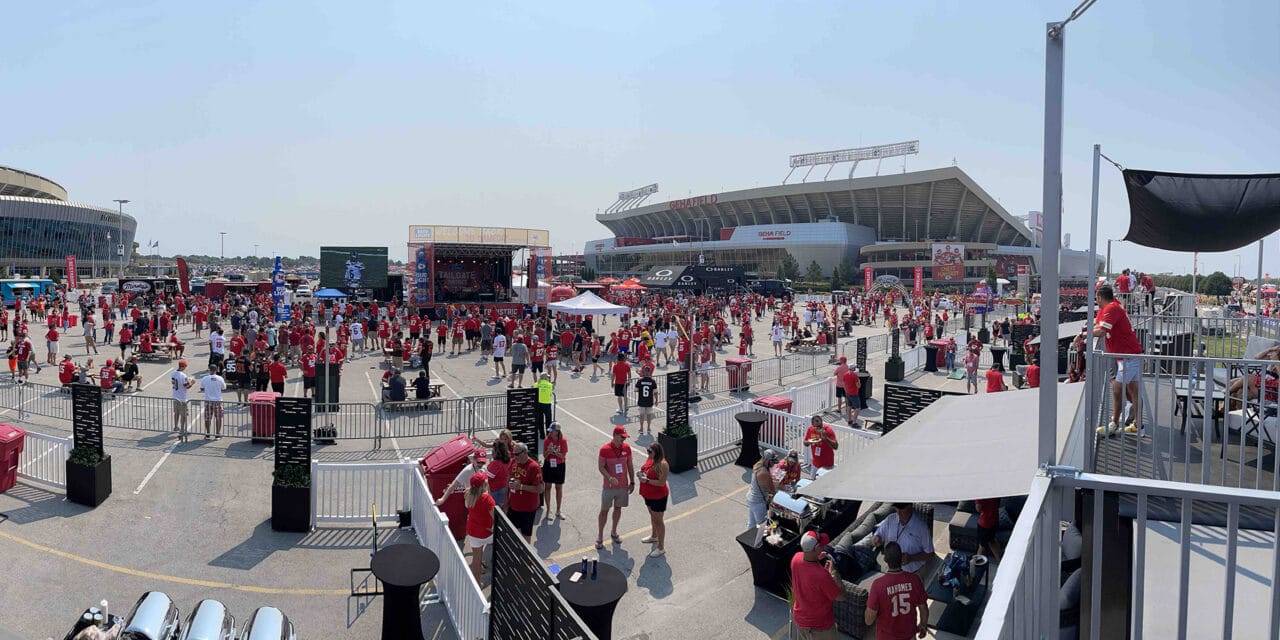 The extreme tailgating trend has evolved from shipping containers to tiny homes to lightweight, portable units with high-end finishes that set up in less than an hour.

The Spectator Suite unit features a second-story veranda with a staircase and railings.

Party Shack’s competitors include Tailgate Guys, which provides a more traditional white-tent premium tailgate experience. Tailgate Guys has deals with the Atlanta Falcons, Buffalo Bills and Tampa Bay Buccaneers. Most of its business is with college football teams.

On its own, Party Shack has gained traction in the NFL, providing tailgate suites for the Kansas City Chiefs, the Washington Football Team and the Minnesota Vikings after first testing the concept for two seasons pre-pandemic at Jacksonville Jaguars games.

The larger Spectator Suite with the veranda up top is designed as a trailer with wheels. That’s the model WFT has set up outside FedEx Field in Landover, Maryland.

The Falcons bought three PortaBars to use outside Mercedes-Benz Stadium, team officials confirmed.

Elsewhere in the NFL, Party Shack has had discussions with the San Francisco 49ers and the Los Angeles Rams and Chargers, but no deals have been signed, said Joe Bowers, the company’s president. Joe is Bobby’s father.

In addition, Party Shack could potentially supply tailgate suites for the Formula One Miami Grand Prix race, which is planned for May 8 at Hard Rock Stadium. Stephen Ross, chairman and owner of the race, owns the stadium and the Miami Dolphins. No deal is signed.

For the 2021 season, the Chiefs purchased 10 tailgate suites from Party Shack, a mix of the Spectator and VIP styles, after introducing them for the 2020 NFL playoffs. The VIP unit is a smaller design transported by forklift.

They’re all set up in a parking lot outside Arrowhead Stadium for the season and sold for single games to accommodate groups of 10 to 50 people.

The cost runs $500 to $1,000 a person per game depending on the need for game tickets, seating locations, opponent and the size of the group. Food and drink is covered in the cost, including beer and wine, said Tyler Kirby, the Chiefs’ vice president of business development.

Aramark, the concessionaire at Arrowhead Stadium, provides the food service.

The tailgate suites sold out for the Chiefs’ home opener against Cleveland and there are a few available for the remaining home games. Kirby remains confident the Chiefs will sell the remaining inventory.

“We’ve had the tailgate suite concept for several years now,” he said. “Pre-COVID, it was really just tents, tables and chairs for groups up to 200. Last season, obviously, there were a lot of limitations over what we could do. There were no (official team) tailgates during the regular season, but as we got to the playoffs, we started to think about it a little differently and how it could work.”

The Chiefs were restricted to hosting groups of 10 people for the playoffs outside Arrowhead. At that time, they received positive feedback from those using the tailgate suites, which led to the team buying the units outright.

Team officials see those products as an extension of the premium experience for single-game buyers seeking an upgraded game day package, Kirby said. For the consumer, the tailgate suites provide that step forward to potentially buying a fixed suite inside the stadium.

“We’ve had a lot of discussions internally whether this is the future of corporate tailgating — less of the 200-person, full buffet environment and more of a high-end experience for up to 50 people,” he said. “Whether that plays out or not is to be determined, but we decided to revamp the product and focus on the Party Shack containers for smaller groups and doing it really big with nice amenities.”

The flexibility of the tailgate suites customized for smaller groups has proved to be attractive for teams and venues as the post-pandemic model shifts for pregame hospitality.

“Last December, our phones started ringing off the hook,” Joe Bowers said. “They like our units because of the portability, the ability to set them up and take them down relatively quickly, the hard surfaces inside — which makes them easy to clean — and the open-air environment.”

The Bowers family launched Party Shack in 2017 after seeing a need for a high-end tailgate experience. In the 1980s, Joe Bowers was part of Jimmy Johnson’s coaching staff at Oklahoma State and his two sons were college athletes. Brett Bowers played football at Oklahoma. 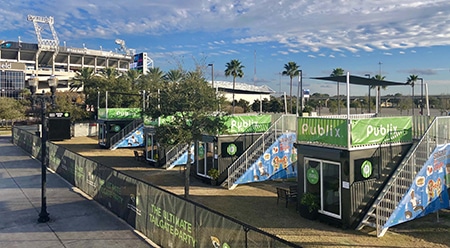 “We were a tailgating family and did the RV thing for many years and traveled around the country,” Joe Bowers said. “We considered ourselves expert tailgaters, and that’s what gave us the drive and desire to do something in that space.”

The Bowers took their time developing the tailgate suite to make sure it was done right. Bobby Bowers, an engineer by trade, went to China to help build the prototype, which was the VIP Suite.

They showed it to the NFL, and league officials suggested they work with the Jaguars in their backyard to test it in 2018.

They found out there was a demand for an upgraded experience with incremental revenue for teams. To date, Party Shack has produced about 100 tailgate suites at manufacturing plants in Dallas and south Georgia.

The company designs and builds all its products in-house.

As part of its business model, Party Shack often deals directly with teams and venues. In other cases, the company sells them to regional suppliers, who in turn, rent the tailgate suites and service them on a local level.

That was the case for the Music City Grand Prix in Nashville, where Top Level Suites, a Des Moines, Iowa, supplier, shipped seven tailgate suites for the August race. The Iowa outfit also provided Party Shack units to the Vikings.

Joe Bowers said, “Most teams are buying them (outright) now because they’re seeing the return on investment.”

In 2019, Party Shack built eight units in a partnership with the Jaguars. The tailgate suites were set up next to TIAA Bank Field, branded for Publix, a regional grocer and a Jaguars sponsor.

Last season, because of COVID-19, the Jaguars did not set up the tailgate suites. The team does not have a current deal with Party Shack, said Chad Johnson, Jaguars senior vice president of sales and service.

The team has its own pregame hospitality inventory inside the stadium on platforms in both end zones, which are a mix of cabanas and a high tent structure at a space called the Sky Patio with capacity for 1,000 patrons.

“We knew where things were coming out of COVID,” Johnson said. “There’s still some uncertainty over capacity (for tailgates), which had an impact on our decision. If this team turns around and we’re selling the stadium like we expect we will be for several years, then the opportunity will present itself again for us to partner with them.”

Apart from football games, the Chiefs set up the seven tailgate suites they had at the time for the Garth Brooks concert Aug. 7 at Arrowhead.

It was the team’s first major event following the NFL playoffs. The team marketed them to groups of 10 to 20 concertgoers as an add-on and sold all seven units, Kirby said. The cost was $300 to $400 a person.

Long term, the Chiefs’ vision is to lease the Party Shack products to promoters in Kansas City for festivals and other special events. The flexibility of those product types fits nicely with those types of events, Kirby said.

“These are dynamic products and we can use them for many other events,” he said. “We had one set up for training camp this year. We see them more than just for football. We could (rent) them for a hospitality experience that may not have anything to do with the Chiefs.”