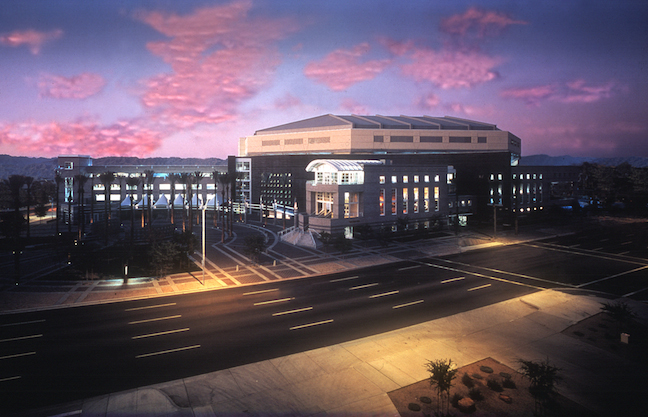 As Phoenix’s Talking Stick Resort Arena (TSRA), home of the National Basketball Association’s (NBA) Phoenix Suns, celebrates its 25th anniversary, there are two people who have been along for the ride from the beginning and instrumental in its successes.
The venue’s director of operations and facility manager Alvan Adams has a long history with the Suns, joining the team as a fourth-round draft pick in 1975 until his retirement in 1988 and having the distinction as the all-time leader in games played (988), rebounds (6,937) and steals (1,289).
While many former professional athletes choose to become coaches or announcers, Adams had different aspirations.
“I always wanted to be an architect and, even while playing with the Suns, I was fulfilling my pre-architectural requirements in college,” said Adams. “When the new building was proposed for the Suns the year I retired, I wanted to be a part of that.”
He served as an intern on the design and development team for the new arena and says one of his claims to fame was inventing a higher shower head in the team locker rooms. Adams stayed on after the building was completed in 1992 in his current role.
Although his initial foray into the arena scene was less illustrious, general manager Ralph Marchetta probably knows the operation inside and out better than anyone.
This is because he served in practically every role at Arizona Veterans Memorial Coliseum, the Suns’ former home.
“I started my career laying asphalt in the coliseum parking lot my first summer out of high school, then sold concert T-shirts, worked security, ushered, helped with stage setup and basically worked my way up through the ranks,” said Marchetta. He joined TSRA when it opened as the event manager and became the general manager in 2007.

THE START OF SOMETHING BIG
By the late 80s, the market for sports and entertainment dollars changed dramatically, with suites becoming more popular as well as a higher level of amenities.
“For the team, the ability to control and maximize the revenue streams was a big part of [the decision for a new arena],” said Marchetta. “The coliseum was owned by the state, so for the team to control its own destiny was part of [the decision to build a new venue] as well as the evolving expectations of the fans at that time.”
The 18,000-seat, $89-million arena opened in June of 1992 as a partnership between the City of Phoenix and the Suns.
“It was one of the earliest examples of a public/private partnership,” said Marchetta.
Located two blocks from the center of town, TSRA is a classic CMU (Concrete Masonry Unit) gray and white building. In terms of its design, this was one of the first venues of its kind with stacked suite levels.
“Our amazing sightlines are not found in the majority of NBA buildings and are ideal for basketball,” said Adams. “While most arenas are built around hockey with Zamboni tunnels in the corners, we just have tunnels around the north and south baskets, and our seat pitch in the end zone is the same as the pitch on the sidelines.”
When it comes to the players and team, the objective was to provide a first-class environment.
“At that time, we designed the practice court to be inside the building, which was then cutting edge,” said Marchetta. “Upgrading the facilities significantly was a way to attract high-quality players and, from a fan’s perspective, it was about better sightlines, upgraded amenities and a better experience.”
In 2001, talks began in earnest to update the then 10-year-old facility. A major $70-million renovation took place in 2004. This included an expansion of the front of the building, an overhaul of the concourses and seats and updated suite levels.
“Sports teams are so exposed to the public, every day during the season there’s information about the game, players, potential, victories. We’re an open business,” says Adams.
To capitalize on this aspect, the architects developed a design with glass curtain walls that encompass 20 feet on two sides and a 50-foot-high atrium on the east side.
“A few years after this was completed, I’m sitting in my office, and I see a guy outside dribbling a basketball between his legs, doing a reverse pivot, taking jump shots, then dropping down to do pushups,” said Adams. “He was auditioning for the Suns by the glass wall in front of our building!”

MAKING ITS MARK
It was TSRA’s first year in operation between 1992 and 1993 that created the momentum for its sustained success in the years ahead.
This was when the 25-year-old Suns acquired All-Star Forward Charles Barkley, who went on to become MVP of the league and led the team to 62 wins and the NBA finals against the Chicago Bulls.
“Even though the Bulls won the championship, it was a fantastic series that we were able to host in a great new building,” said Adams. “And that began an eight- to 10-year love fest with the Suns.”
At the same time, TSRA hosted a number of iconic and eclectic performers, including Metallica, Garth Brooks, Bruce Springsteen and Neil Diamond.
“Looking back on that first season 25 years ago, it was special for a few reasons,” said Marchetta. “The first public event was George Strait on June 6, then two weeks later we hosted two Metallica shows; it was a great lineup. Then the Suns went to the NBA finals with Charles Barkley. It was an exciting time in downtown Phoenix.”
What also marked this period was the obvious synergy between the Suns and the building management in creating a multiuse facility.
“We have a unique relationship between the team and arena management,” said Sarah Schock, director of booking for the last 10 years. “Many venues have a separation or lack of a relationship that provides challenges, but we’ve worked very hard to make sure the arena management complements both the team and non-sporting content.”
This was key in its early years with Barkley on the Suns, but also was a factor when two-time MVP and eight-time NBA All-Star Steve Nash returned to the team in 2004. His time with the Suns was highlighted in the book “:07 Seconds or Less: My Season on the Bench with the Runnin’ and Gunnin’ Phoenix Suns” by Jack McCallum.
“The spinoff activity from the arena is accelerating, not just from the Suns but also with the venue being filled with arena football, Women's National Basketball Association (WNBA), shows, etc.,” said Dave Krietor, president and CEO of Downtown Phoenix Partnership, an organization that focuses on creating and sustaining a culturally and economically robust downtown in Phoenix. “It’s activated all the time, which is good for us.”
This is in huge contrast to the late 70s through the 1980s, when downtown Phoenix had hit rock bottom and was in trouble.
“It became depopulated, with all of the economic activity occurring in the suburbs,” said Krietor.
When the city and the Suns made a deal for the team to relocate from the state fairgrounds to downtown in 1989, it was the beginning of the recovery. It started really taking off by the early 2000s, when Major League Baseball’s Arizona Diamondback’s Chase Field, the Phoenix Convention Center, a light rail system and Arizona State University came downtown; it was then that the community became engaged, said Krietor.
An old city park was turned into CityScape, a highrise, mixed-use development that includes retail, residential, office and hotel components.
“I’ve seen downtown transform from a place where people just went to the event and drove home to a real destination,” said Schock. “People can ride our light rail system downtown for free with their event ticket and go to dinner and a show, then get a drink afterwards. It’s become safe and welcoming over the last 10 years, and there are now things to do and places to go outside of the arena.”
Marchetta estimates TSRA has had an economic impact on the city to the tune of more than $1 billion.
“The building was one of the main drivers for downtown’s redevelopment, with Chase Field being built six years later and only two blocks from us,” he said.
In terms of the Suns’ support, one of the real challenges with fast-growing sunbelt cities is folks come from all different places and have team allegiances from where they came from.
“The Suns were the first entity here that brought people together for community pride and connectivity,” said Krietor. “We now have a couple generations of people who grew up with the team, and it draws people together who are originally from other places. It not only has fostered a deep loyalty in the community but is fundamental to Phoenix’s culture.”

PAR FOR THE COURSE
Fortunately, in recent years, TSRA has not had to rest on its past laurels. The venue has had great successes with its more recent concerts, including U2, The Rolling Stones, Paul McCartney and Barbra Streisand. It sold out six Garth Brooks shows just two years ago, marking its largest attendance for a musical performance.
“In the last decade, we’ve had a great relationship with Live Nation, which has been our primary content provider, and Terry Burke, president of Southwest Music at Live Nation, has been a great supporter of the building,” said Schock. “Roger Waters was a big show, and we hosted three Lady Gaga tours over the years. We also have a great relationship with Feld Entertainment, which has provided family content like Disney on Ice, Marvel and the circus.”
The arena hosts an average of 150 events annually, outside of Suns’ games.
In celebrating its 25th year, TSRA hosted a reunion of 125 folks who were around when the building opened. This included its first two general managers, foodservice partners, city officials and Live Nation representatives.
To help celebrate its 50th anniversary, the Suns recently unveiled a commemorative logo to mark the occasion. It utilizes the team’s purple and orange color palette, has marks for ‘68,’ the year the team was established, and ‘18’ for 2018 and a rising phoenix bird with PHX. A gold and black version will be used to accentuate the golden anniversary on Jan. 22.
“This is a very exciting, competitive market, which keeps us on our toes,” said Marchetta.