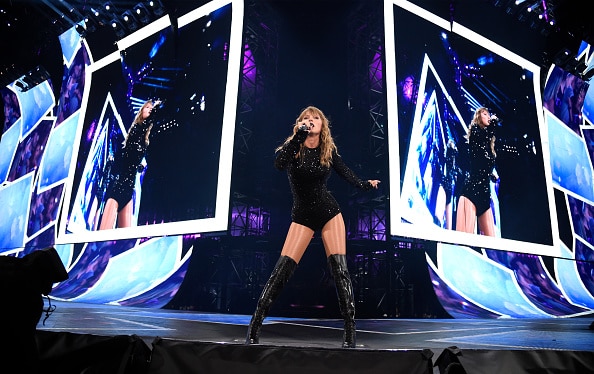 “Ticketmaster takes the heat for all of us.”

The public uproar over crushing demand for tickets to pop megastar Taylor Swift’s 2023 “Eras” tour of NFL stadiums is the latest example of a misunderstanding among consumers and lawmakers over how the concert ticket biz works, industry experts said.

Ticketmaster, among the most controversial brands on the planet, is once again at the center of the firestorm — never mind that the vendor sold a single-day record 2 million tickets on Nov. 15 during presales before shutting the process down and canceling public onsales for the 52-show route.

“Buying tickets to events is not fair; it’s not equitable,” said Maureen Andersen, president and CEO of the International Ticketing Association, a trade group, former vice president of ticketing provider AudienceView, and a consultant with Ticketmaster and Paciolan. “Ticketmaster is doing us a service, they stand as the vanguard and take the heat for all of us. Everybody has an opinion on how our business should be run, but they don’t understand it.”

Ticketmaster officials did not respond to questions sent by email after David Marcus, executive vice president of global music, deferred to the company’s media relations department.

As part of a conversation on LinkedIn, Marcus wrote, “It was a slog, but we delivered 2 million tickets to Verified Fans. We know what we can improve. We’ve found the edges of our system and we’ve already made changes to address. The scale of live touring and related demand are still growing. We will be better next time.”

Apart from Marcus’ comments on social media, the world’s biggest ticketing provider did its best to help the public understand what happened that day, issuing an apology on its website as part of a thorough explanation for what occurred. After reading through the four-page mea culpa, it’s much easier to comprehend how things went awry during a turbulent presale period.

More than 3.5 million people registered for Ticketmaster’s Verified Fan Presale program, the biggest in company history, according to the explanation. About 1.5 million were sent codes to join the onsale for all 52 show dates, including the 47 sold by Ticketmaster across the 18 stadiums where it has ticketing deals in place.

SeatGeek, which handled primary ticketing for the five remaining Taylor Swift dates at State Farm Stadium and AT&T Stadium, where it has primary ticketing agreements, also reportedly canceled its public onsale. StubHub presales produced about 400,000 tickets sold in Phoenix and Dallas-Fort Worth.

Officials with SeatGeek did not return emails for comment.

For Ticketmaster, its remaining 2 million Verified Fans were placed on a waiting list on the “small chance” that tickets would still be available after those who received codes had shopped for tickets, the company said.

The crush of online traffic disrupted the Verified Fan platform, resulting in customers waiting many hours in the virtual queue to buy tickets. An estimated 15% of interactions across the Ticketmaster site experienced issues, including passcode validation errors that caused fans to lose tickets they had “carted,” the company said.

Ticketmaster ended up slowing the sales process down and pushed back others to stabilize its systems, which resulted in much longer wait times in the virtual queues.

In some cases, fans’ persistence paid off. Anecdotally, one woman in Belmont, North Carolina spent six hours online before purchasing two tickets for her daughter to attend a Taylor Swift show at Mercedes-Benz Stadium in Atlanta, Georgia. 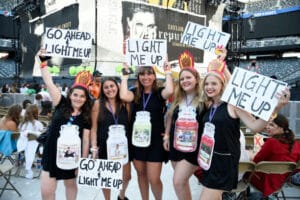 LIT UP: Taylor Swift fans send a message during her 2018 concert at MetLife Stadium. (Getty Images)

“Anybody inside this business knew it was going to be rough,” Andersen said. “With that many people, there’s a finite number of tickets; that’s just the way it is. But everybody thinks that because they’re a fan, they have an inalienable right to get a ticket.”

David Touhey, a venue operations consultant, spent more than 25 years running public assembly facilities, including 10-plus years with Monumental Sports & Entertainment in Washington, D.C. During his tenure there, Verizon Center, now Capital One Arena, played host to two Taylor Swift tours before she moved up the ladder to perform stadium concerts.

To put Taylor Swift’s global appeal and the huge demand to see her perform live at 20 NFL stadiums in perspective, Touhey pointed to her 92 million Twitter followers. Doing the math, for 52 shows with stadium capacity averaging roughly 75,000 for a midfield stage production, the numbers would add up to 3.9 million tickets available for purchase, which equates to less than 4.5% of her followers being able to buy tickets, he said.

“What it all boils down to is unprecedented demand for an artist that’s off the charts popular, hasn’t toured in five years, has released three albums during that time, and now spans generations from elementary school age to college to professionals and adults with huge fandom,” Touhey said. “When you look at it, the feat that Ticketmaster did pull off in getting those tickets out is massive, as well as the scale.”

Andersen has experienced her share of “giant onsales that went south” over her 40-year career, which includes 23 years as treasurer and director of ticket sales at the Denver Center for the Performing Arts. The same is true for most box office professionals, and that’s why they’re empathetic with the Taylor Swift situation, because they know how it feels, she said.

The aftermath of the Taylor Swift ticketing snafu has federal and state legislators calling for more investigations into Ticketmaster and its parent company, Live Nation Entertainment, the world’s biggest concert promoter.

There’s been a lot of rhetoric over the past week with politicians saying they’re going to break up Ticketmaster and the need to revisit the merger with Live Nation, but Live Nation is not promoting the Taylor Swift tour. Messina Touring Group, a partner of AEG, is Taylor Swift’s national promoter, Touhey said.

“Miss Swift herself and her people are calling the shots, as is AEG,” Andersen said. “Ticketmaster did not operate in a vacuum here. They take the brunt of it, because they’re the largest. There’s no system in the world that will be able to do four million people hitting it for however many seats.”

Jeff Kline, an industry veteran, knows the ticketing industry well. Kline worked at Ticketmaster from 1987 to 2000 and became an executive vice president at the firm before serving as president of the old Veritix for four years, which eventually merged with Axs, AEG’s ticketing company.

“I applaud the way Ticketmaster has handled the situation,” Kline said. “I read these stories about Congress calling for the breakup of the two companies and it’s ridiculous. It’s a competitive landscape. There are more ticketing companies in the U.S. now than ever before.”

Congress would benefit from hearing from industry professionals apart from the “huge voices” such as Ticketmaster that sell tickets every day to get further insight into the intricacies of the business and the technology required to make it work, Andersen said.

“The thing I fear the most out of this is the politicians that want to regulate a business that we already self regulate very well,” she said. “We learn from each other, right or wrong. We all adhere to a code of ethics. That’s really what it’s all about and what’s being forgotten here.”

If lawmakers want to place the blame on somebody, go after the brokers, the bots and their transactional methods, Touhey said.

“The brokers see themselves as retailers and the primary ticket sale as a wholesale platform and that’s not the way the retail model was set to be,” he said. “Look at the supply chain issues with masks and cleaning products around COVID. People tried to do the same thing, buy and sell them at a huge markup. The government stepped in, but no one does that with ticketing.”