The Caverns Unearths A Gem In Tennessee (Cover Story) 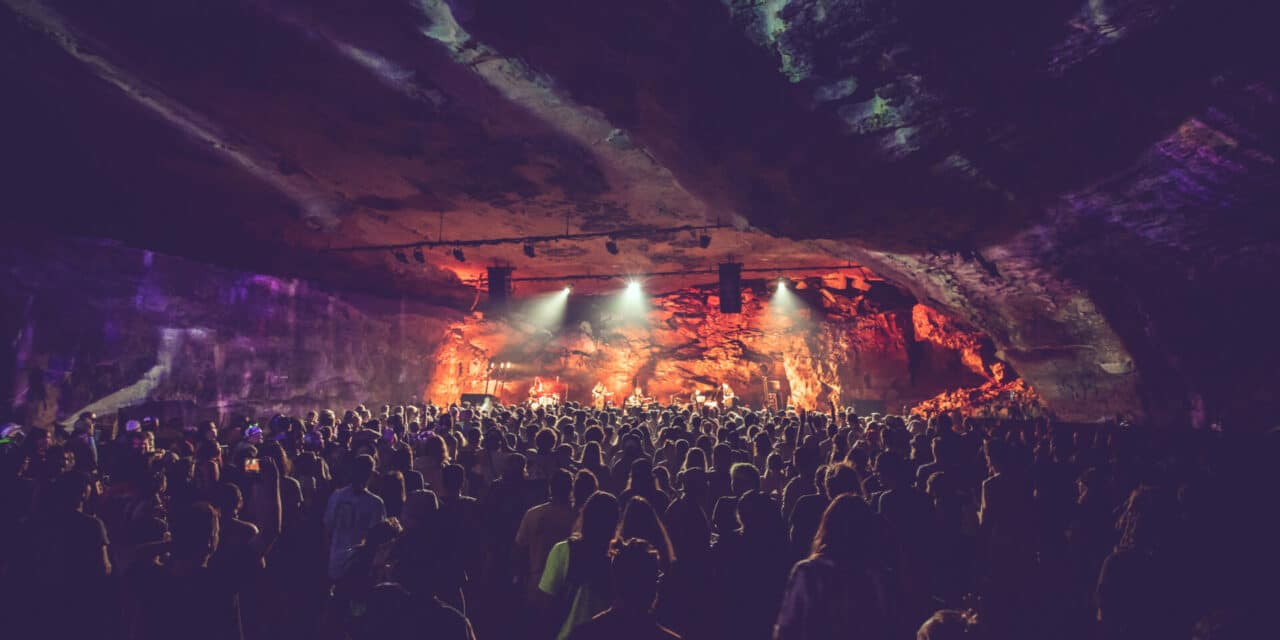 If Red Rocks in Colorado and Carlsbad Caverns in New Mexico had a Tennessee baby, it would be The Caverns in Grundy County — a natural, live music complex with full-blown concert venues above and below ground.

Situated in Pelham, Tennessee — 90 minutes south of Nashville and one hour north of Chattanooga — The Caverns is a sprawling subterranean system of caves that features otherworldly Big Mouth Cave, which can accommodate up to 1,200 for a standing-room concert. The property extends to an open-air amphitheater with fixed and general admission lawn seating and camping space for 5,500. Todd Mayo of Loblolly Ventures owns and promotes the independent venue with verve and gusto. His vision has turned the prehistoric cave system covering more than 8,000 linear feet of passages into an international destination for spelunkers and music lovers alike.

Mayo entered his first cave in 2008 on a tour of Cumberland Caverns in McMinnville, Tennessee. “It captured my imagination,” he recalled. “There was something epic and mythic about the experience.”

At the end of the tour, he asked the guide if they had ever hosted live music in the cave. They hadn’t, but the idea enthralled Mayo, who had no music experience but ran an advertising agency and understood branding and marketing.

Eight weeks later, he launched “Bluegrass Underground” on legendary WSM Radio in Nashville. The show aired before the famed Grand Ole Opry from the caverns with The SteelDrivers (Chris Stapleton was the lead singer).“Two hundred and fourteen people paid $15 each to see Chris Stapleton in a magic cave,” Mayo said. “Now, all of a sudden, I’m in the music business.”

The show found a home on public television and is now branded “The Caverns Sessions.” Mayo is busy booking the 12th season, which will tape in March 2023. They have hosted a diverse cast of players from Brandi Carlile, Jason Isbell, Lucinda Williams and Widespread Panic to local and lesser-known artists, but always in service to the music. Mayo said, “Music is about discovery and caves are about discovery … it’s like shining a light in the dark.”

The McMinnville location was cool, but not the ideal venue for live music. Production and space limitation and restrictions on concessions and selling beer eventually forced Mayo to find “the cave of my dreams” in Pelham, about 30 miles south. 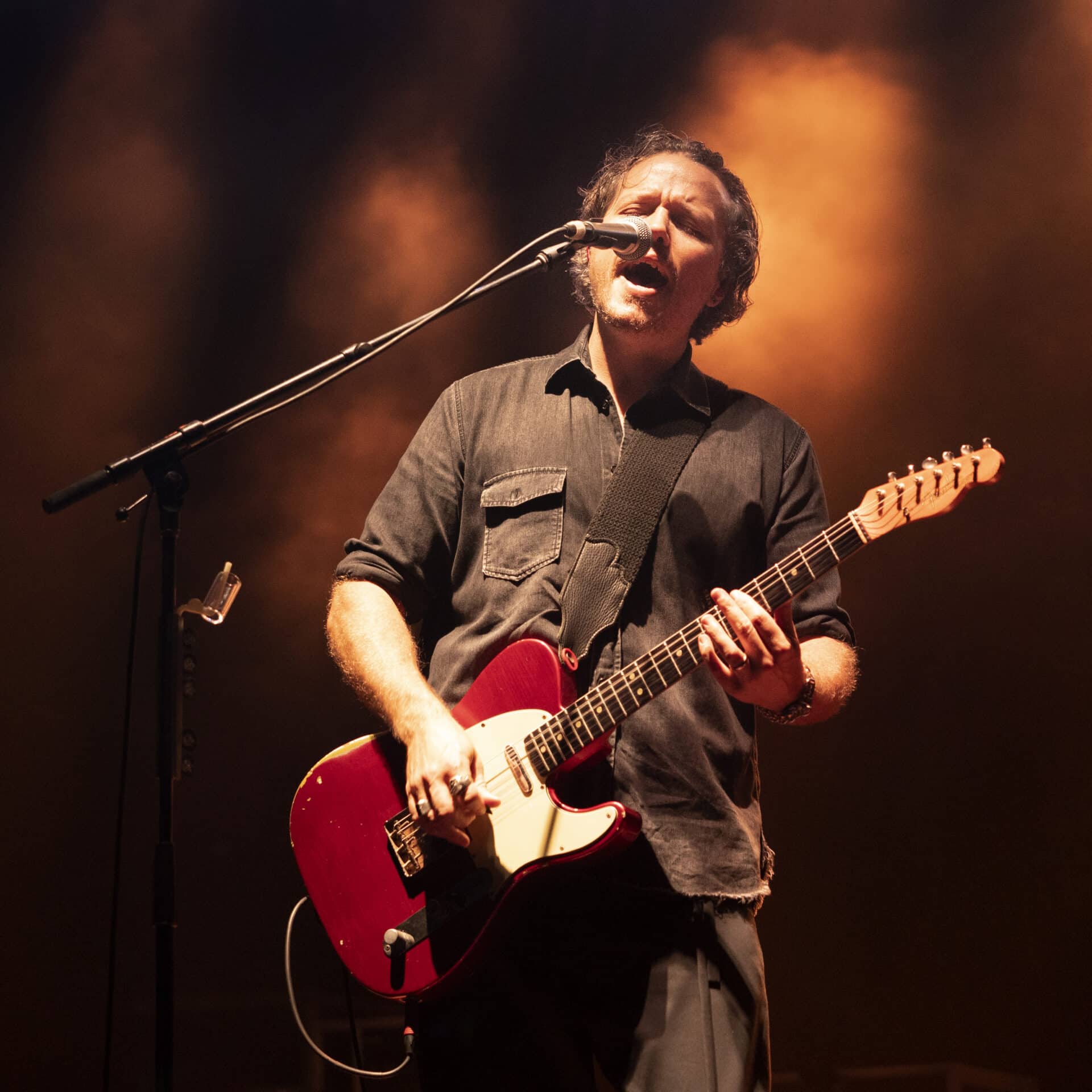 ABOVE GROUND: Jason Isbell was one of the many high-profile artists playing The Caverns Amphitheater in 2021 in a socially distanced setting. Momentum continues at the outdoor venue, which just hosted the first of what will be annual CaveFest events. (Getty Images)

“I’ll tell you the gist of the story, and by gist I mean geolo-gist, hydrolo-gist, archaeolo-gist and biolo-gist,” Mayo said, laughing. Before the first concert, Mayo had to make sure Big Mouth Cave at The Caverns was structurally sound.

Hydrologists had to map flood patterns for the installation of pumps. State biologists were consulted on the potential impact to Tennessee’s amphibian, the big mouth salamander. Plus, the region had been home to native Americans including the Cherokee and Mayo wanted to make sure nothing of historical significance was desecrated or destroyed.

Despite the challenges, turning a natural cave into a thriving music venue worked.

Named for the large archway entrance, Big Mouth Cave has a ceiling height of 22 to 33 feet and is equipped with state-of-the-art sound and lights as well as restrooms and concessions, which take cash or card. The cave stays at a comfortable 56 degrees year-round with 98 percent humidity.

“We found out about The Caverns a couple years ago and quickly realized how special a venue it could be,” said Evan Winiker, manager of veteran jam / electronic band the Disco Biscuits and managing partner in the music division at Range Media Partners. Winiker saw how special it was after putting up several socially distanced shows in 2021.

“They blew out immediately and as soon as that happened, we started looking toward the following summer and what we could do there again,” Winiker said. “Not only do they have one of the most unique venues in the world but they also have an outdoor amphitheater that is going to be an annual pilgrimage for us as well. We’ve done two runs outside, one run inside and are going back in 2023.”

Singer-songwriter Todd Snider has played many venues over his career, yet the Caverns stands out.

“The shows at The Caverns are always really unique for me, and people really dig them too because they can camp and make a bit of a festival out of it,” said Snider, who played the cave on his 2021 “Return Of The Storyteller” tour and in July this year with Tommy Womack.

Based on box office data reported to Pollstar, both The Caverns and Caverns Amphitheater have grossed about $10 million on more than 160,000 tickets sold to 170 shows. Those records began in 2018 for the underground venue and 2021 for the amphitheater. For this year, Caverns officials say they hit $7 million gross revenue on 79,000 ticket sales, and for next year they forecast 150,000 patrons between cave shows, amphitheater shows and festivals, with between $15 million and $20 million total revenue.

“The Caverns, being located in the beautiful Tennessee countryside, provides the artist and fan with a unique underground concert experience that attracts music lovers from all over the country,” said Hunter Williams of CAA, who represents Moon Taxi and STS9, both of whom have played The Caverns subterranean concert hall.

“As a booking agent, I’m always on the hunt for venues with unique history, acoustics, or overall standout experiences for our artists and fans,” added Troy Lawton, founder/agent of Forge Ahead Touring. “This one checks all the boxes and then some.”

One of Lawton’s clients, rock band Copeland, sold out a release party on Sept. 17 at The Caverns featuring the Sewanee Symphony Orchestra from the nearby University of the South. Tickets for the 850-seated event cost $59.50 and sold out two months in advance.

With a slightly sloping concrete floor, the venue is accessible to fans with mobility concerns or physical disabilities. Mayo said that claustrophobia hasn’t been an issue.

“We sometimes see social comments from guests who think they might feel claustrophobic in The Caverns. However, when they experience the venue in person, those feelings subside,” Mayo said. “The cave is very large with no tight squeezes to get to the performance area. In fact, you can even see outside through the cave doors from the stage.”

A CHANGE IN PLANS 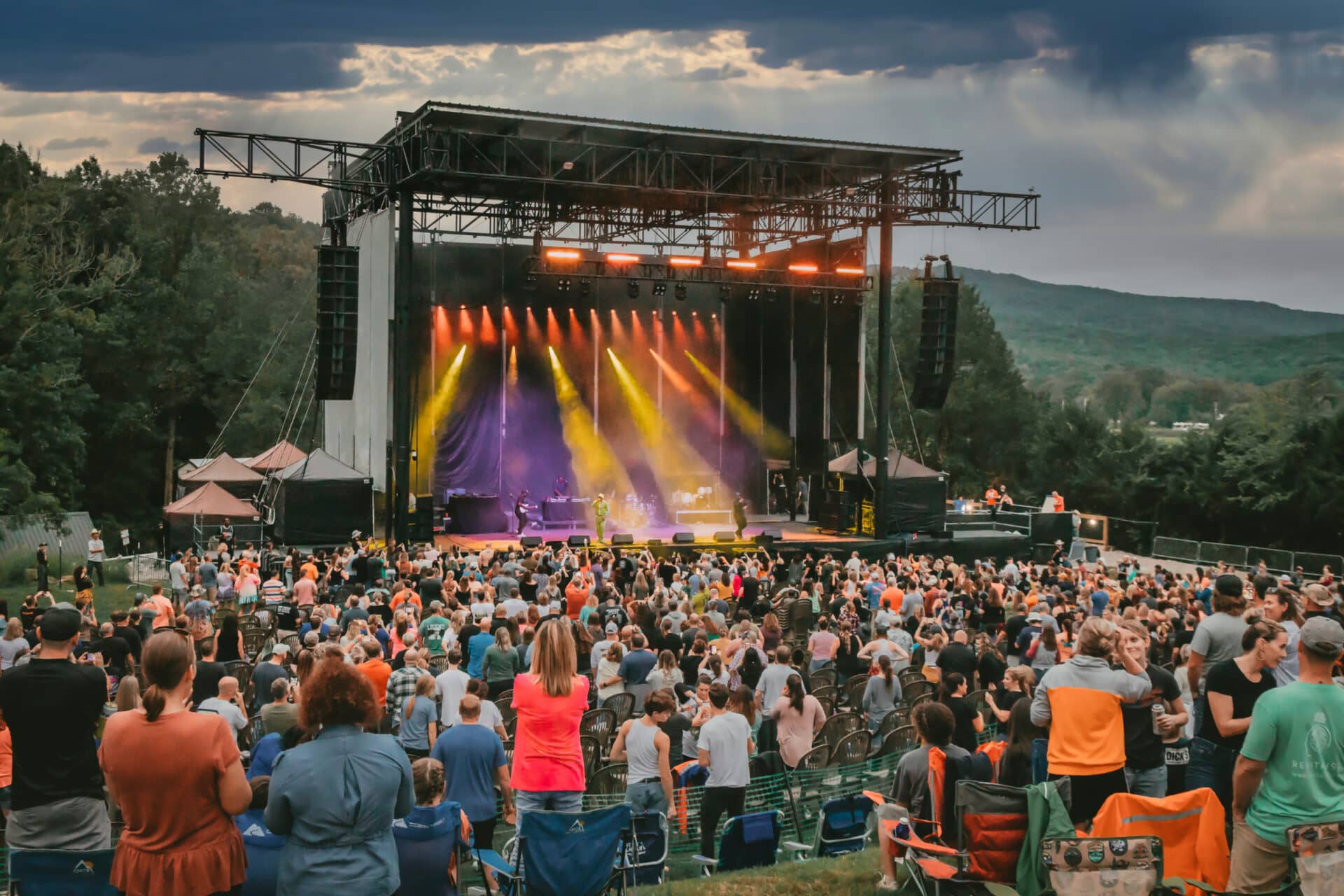 CAVE CAMP: The 5,500-capacity Caverns Amphitheater has given way to camping, an important element with more than 70% of attendees coming from out of state. (Matt Morrison)

Mayo had booked 70 shows for 2020 with more than half sold out in advance when COVID-19 hit. That forced him to dig deeper into his creative side. The Caverns has multiple caves on the 50-acre property, and Mayo opened Big Room Cave on July 4, 2020. It was the first show cave (one that permits tours for the public) to open in 70 years. The team started giving daily guided tours of the space, which is the length of three football fields.

“We went from being presenters, bookers, promoters and talent buyers to cavemen and tour guides,” Mayo said. “We didn’t furlough anybody. At a pessimistic time, it was light at the end of the tunnel, literally and metaphorically.”

Another major shift happened after a call from Isbell’s booking agent, WME’s Andrew Colvin. He turned Mayo onto the idea of pod-based shows with smaller, isolated groups of four to six people socially distanced from other groups.

Mayo brought in 500 truckloads of dirt and built an amphitheater. “It saved our ass and allowed us to stay in business,” Mayo said. “During the dark days of COVID, we really reimagined what was possible at The Caverns.”

“The natural beauty of The Caverns Amphitheater and its massive stage create an epic concert setting for bands and fans alike,” said Josh Knight of Wasserman Music. Knight represents Leftover Salmon and The Infamous Stringdusters, who both played CaveFest at the Amphitheater in October. “And with the new campground, you’ve got a very accommodating destination venue for festivals or even individual tour dates.”

The amphitheater has concessions that are managed by The Caverns internal team and features local food trucks. For outside shows, attendees can use the restrooms in the cave as well as portable facilities.

The Caverns employs 11 full-time employees and more than 100 independent contractors with the day-to-day handled by general manager Joe Lurgio.
With picturesque views of the Cumberland Plateau on the southern tip of the Appalachian Mountains, The Caverns Amphitheater has reserved seating for 1,500 with exclusive access to a bar and restrooms and room for another 4,000 patrons on the lawn. Mayo leased an adjoining 50-acre farm for parking and added a large campground to accommodate 5,500 people.

The areas above and below ground were used for the inaugural CaveFest in October with a daily attendance of 4,000 enjoying everything from cave yoga to late-night cave jams and a screening of the movie “The Goonies” in the cave.

According to Mayo, 73% of attendees at The Caverns are from out of state with attendance expected to reach a record high 100,000 this year. Projections for 2023, should top 150,000 with the return of CaveFest, season 12 of “The Caverns Sessions” (taped March 24-26) and artist curated weekend festivals expected to be announced soon.

“Whether you’re checking out a new act, or traveling to see an old favorite, The Caverns is a destination venue worthy of any industry Top 10 list,” Lawton added. “For artists, it’s one of those places that hits an emotional trigger that breaks up a tour that might start to feel monotonous. It would be hard to not find deep inspiration playing a once in a lifetime show in a place that has been an epicenter for music and community for thousands of years.”

“In some ways it is the great American music park,” Mayo surmised. “It’s outdoors, in nature — and of nature — but there are multiple things to do programming wise and we are enjoying leaning into that in 2022 and into the future.”