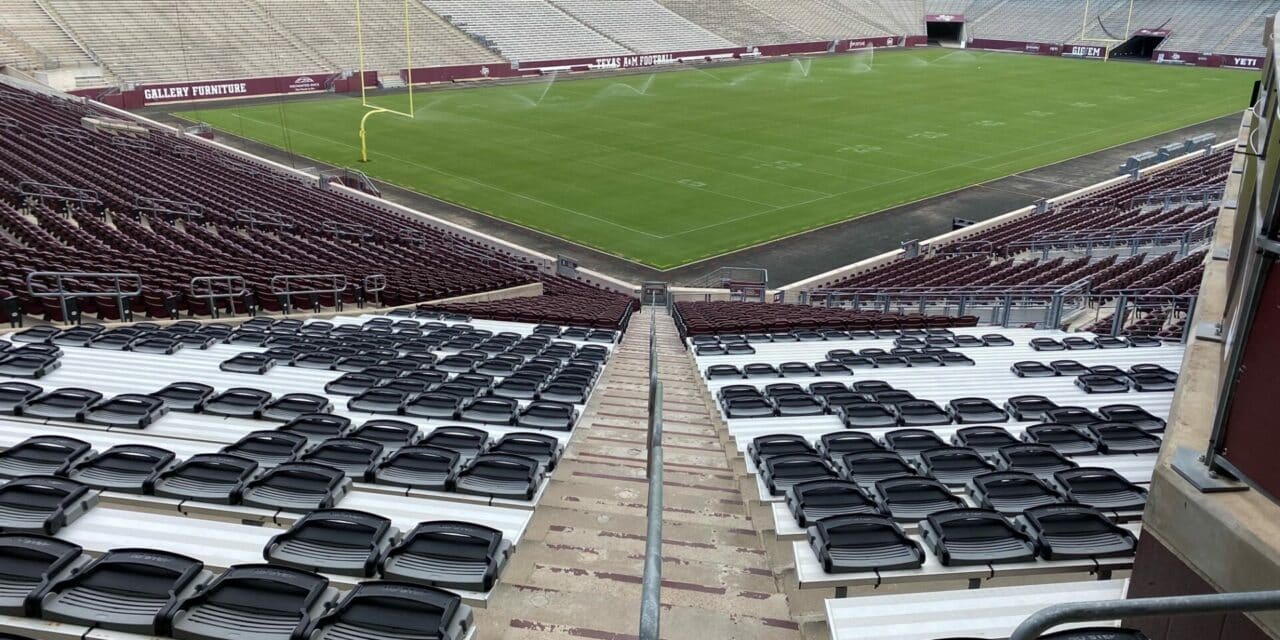 GOT YOUR BACK: DreamSeat signed a deal with Texas A&M to supply its new fold-down seat back at Kyle Field. (Courtesy vendor)

Over the past two years, 4Topps and DreamSeat have joined the competition, partnering with schools on revenue-share deals to rent seat backs to season-ticket holders and single-game buyers. Both companies produce a hard plastic and mesh version that attach to aluminum bench seats, an upgrade over the standard vinyl cushion seat backs common across the industry.

Combined, they have deals with about a dozen schools that previously did business with Amplify. As it stands now, the improved seat backs have put 4Topps and DreamSeat one step ahead of Amplify, whose current inventory consists of vinyl seat cushions branded with schools’  logos and team colors.

To counter that loss in market share and improve its overall product, Amplify has partnered with Bemis Manufacturing, a Wisconsin company known as the world’s biggest toilet seat manufacturer. Starting with the 2023 season, Amplify will offer schools a new molded plastic and mesh seat back, produced by Bemis.

It’s a much better seat back compared with the vinyl cushions Amplify currently provides Power 5 programs, for which the company holds 90% of market share, said Jake Bye, the firm’s executive vice president in Plano, Texas, home of Learfield’s corporate headquarters.

“It’s more durable, resistant to rust, there’s no exposed hardware and it fits any size bleacher,” Bye said. “It doesn’t hold water because it’s mesh and fully customized to each school.”

On their own, seat backs present a significant piece of business as an add-on for season-ticket holders. Amplify alone sells more than 25,000 seat backs at Power 5 schools such as Georgia and Ohio State. The number trickles down to 2,000 for smaller institutions. 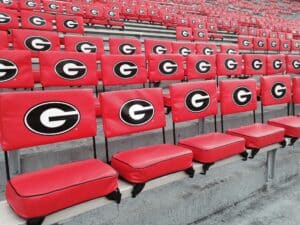 Amplify’s seat backs run $50 to $75 for the season for season-ticket holders and $10 to $15 a person for single-game buyers. At Georgia, Amplify sells 2,500 seat backs on site for single games, Bye said.

The math adds up close to $2 million a season in revenue for Georgia alone.

Amplify has a dedicated website for seat back rentals integrated with schools’ season ticket renewal program. Many of them are clients of Paciolan, the digital ticketing firm owned by Learfield.

Plus, Learfield holds the multimedia rights for dozens of Power 5 programs, its core business, but it depends on the school whether Amplify can capitalize on the relationship with its sister firm. The Bemis-produced seat backs will contain a pocket on the back to showcase athletic department sponsors with the flexibility to be shifted between games and seasons.

“Sometimes, the MMR folks pitch Amplify,” Bye said. “We’re a relatively new asset for Learfield. We’ve put together a packet of what it’s really worth (to potential sponsors). The business has evolved from selling spots and dots and impression-based assets. We’ve had to work to attach a value beyond just the logo on the back of a stadium chair. In the long run, it will make our business more effective.”

For Amplify, it’s fair to say 4Topps and DreamSeat pushed it to find a better solution, Bye said. The 20-year-old firm, which has changed four times over that period of time, spent two years researching an upgraded seat back and visited Bemis multiple times to help resolve all the feedback they heard about providing greater fan comfort.

“We keep our ear to the ground for what our competitors are doing,” he said. “That’s the direction the industry is going. Penn State’s stadium has grown with different size bench seats in the upper deck. Sometimes, they change size within a section, so that required in the past ordering different frames and being precise with the inventory mix. That’s a big part of what we wanted to accomplish here, having two decades of experience and feedback.”

Overall, about 200 schools participate in some type of seat back program, providing plenty of opportunities for competitors, said Deron Nardo, 4Topps’ president and chief operating officer.

Eight years ago, 4Topps started producing “breathable” mesh seating for outdoor venues in the big leagues before expanding to college facilities. Last year, the firm introduced a mesh seat back option and now has deals with 10 schools, Nardo said.

All those schools, including Mississippi State, Purdue, Georgia Tech, Boise State and BYU, are former Amplify clients. Purdue and Georgia Tech both use between 5,000 and 6,000 seat backs produced by 4Topps. Season-ticket holders go through the athletic department websites to order seat backs as an add-on, Nardo said.

“We’ve got proof of concept and the durability is proven,” he said. “It’s become a sweet spot for our business.” 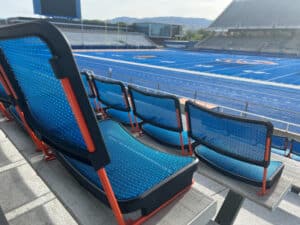 BOISE BLUE: 4Topps was first to market with a mesh seat back for colleges, including Boise State’s Albertsons Stadium. (Courtesy vendor)

DreamSeat, a supplier since 2006 of fixed seating for stadiums, arenas and festivals, is the newest entrant starting with the 2022 season. The Hauppauge, New York firm’s first client is Texas A&M, where it supplies 6,500 fold-down seat backs for season-ticket holders and 1,000 for single-game buyers at Kyle Field, said Chandler Suprina, company president.

DreamSeat’s version is a hard plastic slotted seat with a mesh back rest. It has the ability to recline, which given the tight fit with bench seating at most college football stadiums, may not always be ideal for fans sitting behind them.

“When you show up at Kyle Field and it’s been raining all week, you’re not sitting on a soggy seat back, like historically you would,” he said. “It’s also about being able to store easily in the offseason and reinstall (the following year) and still have a high quality seat.” 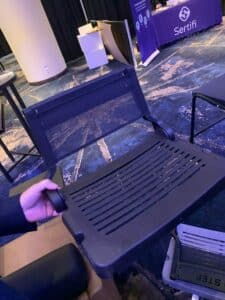 For DreamSeat and 4Topps, unlike Learfield Amplify, seating production is their primary business. 4Topps’ strategy is to parlay seat back deals into selling upgraded fixed seats in premium spaces at college venues with the other products it manufactures, Nardo said.

Seat backs are a nice option, he said, but with the rapidly changing landscape in college sports and the vast number of renovations going on at football stadiums, it’s at best a temporary fix for aging facilities that are mostly concrete bowls and aluminum benches.

“We’re trying to get these (schools) thinking about the next five to 10 years, not just replicating this model,” Nardo said. “We’re doing nice projects for Florida State, Clemson and Rice with club seating in the end zones, concurrent with our seat back program.”

Wake Forest University, situated a half-mile west of 4Topps headquarters, doesn’t have a whole lot of seat backs at Truist Field, the ACC school’s football stadium. But in 2021, officials installed 300 to 400 4Topps seat backs on bench seating in the center section at Spry Stadium, a 3,000-capacity soccer facility that they can sell at a higher price point as the only seat backs in the venue.

At Truist Field, officials converted eight rows of old aluminum benches into two rows of 75 fixed mesh seats with drink rails made by 4Topps. Those all-inclusive ticket packages are tied to the Pollard Club at the 40-yard-line on the east side, which is also used for the Winston-Salem Open pro tennis tournament. The tennis complex sits next door to the football stadium. The seats are sold at a higher price point and it’s a new amenity for the ATP event.