Year Of The Stadium: Some NFL Venues To Host Up To 15 Concerts 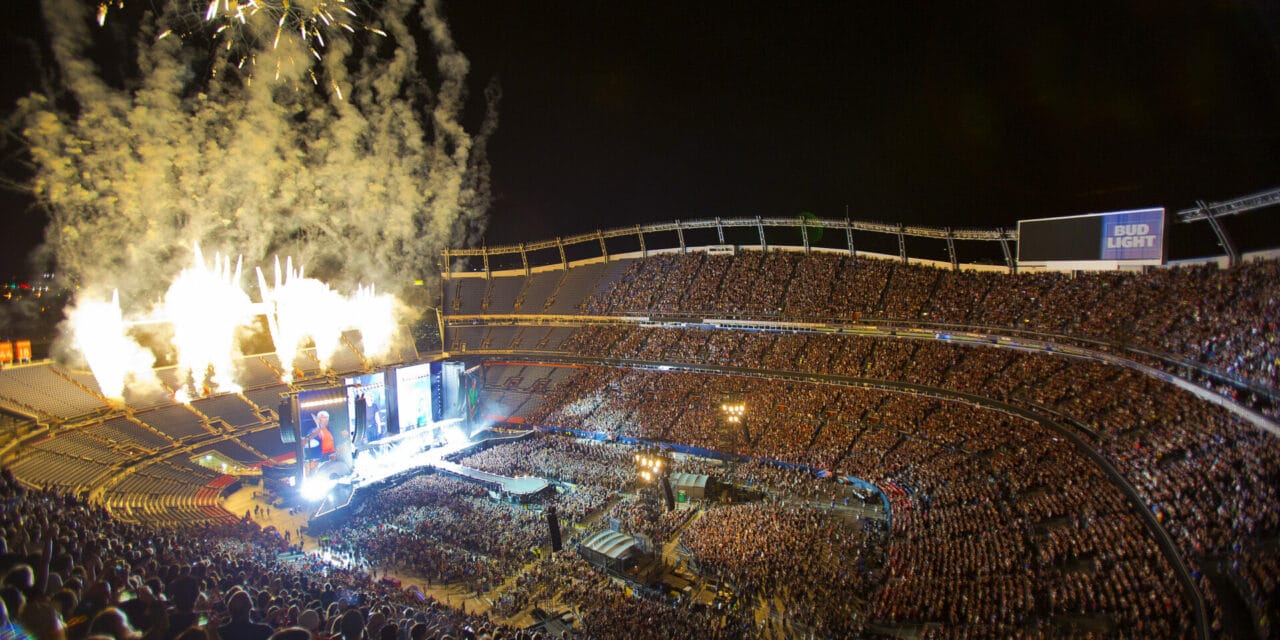 The floodgates have opened for big league stadium concerts. The 2022 season is shaping up to be one of the busiest on record after the pandemic largely shut down those massive events over the past two years.

As of mid-March, VenuesNow counted 15 tour packages booked for multiple stadiums this year with some artists such as Bad Bunny and The Weeknd stepping up to play those large venues for the first time in their careers. That number is still growing, with Imagine Dragons recently announcing a run that includes six stadiums.

Allegiant Stadium alone has 15 concerts confirmed for 2022 in Las Vegas, including Metallica and Billy Joel, which took place in February, said Chris Wright, ASM Global’s general manager of the NFL facility that opened in 2020.

SoFi Stadium had 11 shows on sale and 10 concerts have been announced at MetLife Stadium, according to their websites. MetLife could potentially match Allegiant with 15 shows as more tours are announced, said Steve Sansonese, director of facility operations and events.

Those are unprecedented numbers for stadium shows, even in major markets such as New York and Los Angeles. Some artists such as Billy Joel, Garth Brooks, Elton John and the Mötley Crüe/Def Leppard/Poison/Joan Jett package are holdovers from 2020 after postponements over COVID-19.

The industry knew an onslaught was coming. Last year, as a few stadium tours trickled out starting mid-summer into early fall, experts predicted a gusher of tours would take place in 2022 and flow into 2023 and 2024.

Considering the backlog, some artists are strategically pushing their tours to next year to avoid the glut and create some elbow room for the opportunity to sell more tickets, according to team officials and facility managers.

The Denver Broncos, for example, have 12 dates on hold for concerts in 2023, a greater number than the nine dates held for this year, said Jon Applegate, the team’s director of events and booking for Empower Field at Mile High.

As it stood in mid-March, Empower Field had five concerts announced for 2022, with tickets on sale for four of those shows. The Red Hot Chili Peppers are playing their first full-scale stadium tour since the band formed in 1983, kicking it off July 23 in Denver.

More shows could be announced in the coming weeks, Applegate said.

“This is the year of the stadium,” he said. “It couldn’t come at a better time. In terms of saturation, I look at it purely from our market perspective. Denver is one hell of a market and we’re seeing this major growth from the population and different styles of music come through here. It’s a music town.”

Many teams, depending on the show, say they take financial risk to be in a better position to secure dates. They don’t have to share concert-related income under leagues’ revenue-sharing formulas, which takes on greater significance this year considering the enormous losses they incurred during the shutdown with no fans in the stands.

The Atlanta Braves, fresh off winning the 2021 World Series, are comfortable co-promoting or doing straight rental deals, said team president and CEO Derek Schiller. Regardless, Truist Park had five concerts on the books with the possibility of adding two to three more shows for 2022, Schiller said.

To this point, the most concerts the ballpark played host to was three concerts in 2017, the year it opened.

“Things are changing almost daily in that business,” Schiller said. “Some artists are continuing to investigate 2022 and some are maybe pausing and going out in 2023. There are so many tours going on this year that it affects everything, (mostly) the marketplace for tickets. There’s only so many people able to go to concerts, but there are other factors such as labor, supply chain, production crews, equipment. There’s limitations to how many you can do.”

With so many stadium tours hitting the road, more teams are booking back-to-back dates at their venues as artists share the same staging infrastructure as part of accommodating as many shows as possible while saving on production costs.

MetLife Stadium, for example, has Kenny Chesney, Lady Gaga, Swedish House Mafia and the Chili Peppers all sharing the same stage for separate shows over a two-week period from Aug. 3-17. Each tour pays its own production costs and splits the expense of steel and staging, Sansonese said, which saves everybody a lot of money in a market dependent on union labor.

Booking concerts in tight windows of open dates during baseball season is part of the economies of scale concept. MLB teams basically have three to four months to work with for scheduling special events around home games.

The Boston Red Sox and Chicago Cubs, two MLB teams active in the concert market, have been doing it for years at Fenway Park and Wrigley Field, respectively. In Atlanta, that’s the case with Mötley Crüe and Zac Brown (June 16-17) and there’s a possibility Truist Field could do a “triple play” with a third tour added to that timeframe, Schiller said.

“We’re prepared to do it,” he said. “There are a lot of factors that go into that. One is you have to put Teraplas (plastic cover) down on the field and it’s down there a little longer. The question is how do you take care of the grass so when you remove it, you can play a game 48 hours later.”

Allegiant Stadium, which did a back-to-back with Metallica and Billy Joel, has a grass surface but ASM Global doesn’t have to worry about post-concert repairs. The facility has a removable field that rolls in and out of the building depending on the event. State Farm Stadium and Tottenham Stadium are the other two venues with similar systems.

“It’s such an easy load-in and load-out and our timelines are so fast, which helps us increase activity, whether it’s stadium tours or other events,” Wright said. “The nature of the design is such that it’s a lot less expensive from a production standpoint, especially if you’re promoting a show and taking on risk. We don’t have to roll trucks across covered grass.” 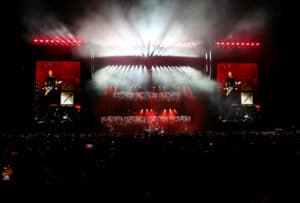 WHEREVER I MAY ROAM: Metallica, which has announced two stadium shows for the summer, pictured at Allegiant Stadium in Las Vegas Feb. 25. Photo via Getty Images

In Vegas, a city built on tourism, $750 million in public money tied to hotel room taxes helps the Las Vegas Raiders fund the $2 billion project. The pandemic caused a shortfall of several million dollars in tax revenue, supported by a reserve fund, but special events apart from NFL games help fill that gap.

Concerts are a key piece of that equation, but there’s also some strategy involved, said Taylor Silva, director of business development for the Raiders, Allegiant Stadium’s primary tenant. Silva fills a newly created position for the Raiders. He works closely with the Las Vegas Convention and Visitors Authority to decide which events make the best sense for the 65,000-seat facility. His role is part of rebuilding the Raiders’ executive staff after former team president Marc Badain and other executives left the organization over the past eight months.

As part of it, the Raiders are building a proprietary data-driven model to measure the financial, economic and social impact of special events at Allegiant Stadium, Silva said.

“One thing we’re starting to do is look at things holistically,” Silva said. “We’re looking to develop a model with two different opportunities — what is the show worth to the stadium and to our fans? Also, what is it worth to the community? We got a substantial public subsidy here, so we feel it’s our responsibility to be good partners.”

In the Bay Area, the San Francisco 49ers and the city of Santa Clara, where Levi’s Stadium sits, haven’t always been good partners since the building opened in 2014. They’ve clashed on a number of issues over the past eight years, including rent payments, parking and management of Levi’s Stadium for non-NFL events.

That’s why it’s noteworthy that the city council in November approved curfew exemptions to allow the 49ers to book up to five weeknight concerts a year, said Emily Eskin, the team’s head of public events.
The curfew was extended from 10 p.m. to 11 p.m., which opens the door for additional content, Eskin said. Coldplay, the stadium’s first concert since 2019, takes place Sunday, May 15, considered a weeknight under the exemption. The 49ers book concerts on behalf of the Santa Clara Stadium Authority, their landlord.

Levi’s Stadium had three concerts confirmed for 2022 with a few more shows in the works.

“It’s the perfect storm right now,” Eskin said. “These shows are crucial for the team and the city, as well as San Jose. Hotels, restaurants, bars, ride shares are all significantly impacted by the events we’re able to secure.”

All told, it promises to be a wild summer for concerts. “It’s exciting after being stuck at home the past two years,” Silva said. “This is the summer we were all hoping it would be, which is really nice, getting back to normal.”