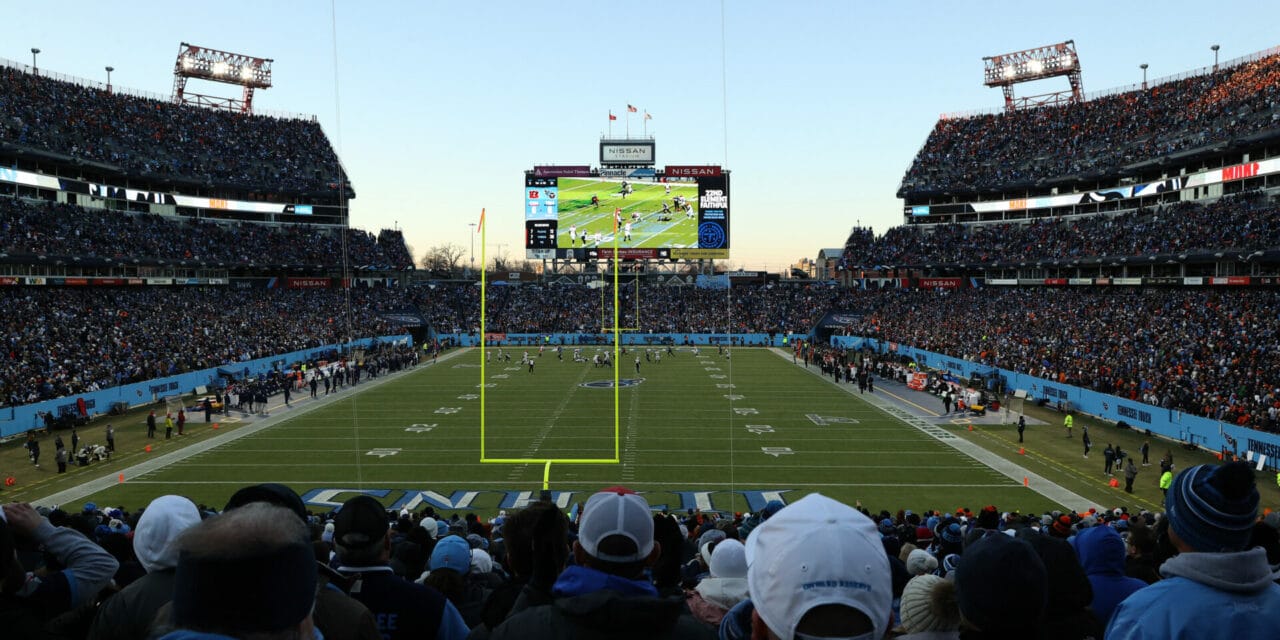 TITANIC DESIGN: An end zone view during the 2022 AFC Divisional playoff at Nissan Stadium. The Tennessee Titans are moving quickly to develop a new venue to replace their 23-year-old home. (Getty Images)

Manica Architecture is on one of the hottest streaks in recent memory across sports architecture. The Tennessee Titans confirmed they have selected the small Kansas City shop to design initial concepts for their proposed $2 billion stadium.

The upstart design firm is responsible for planning the stadium’s programming and concept elements. The Titans selected Manica in tandem with CAA Icon, owner’s representative for the project, sources said.

In a statement provided to VenuesNow, the team said, “A standard initial step in any potential stadium project is to bring on an architect to assist with conceptual planning. Manica’s work will help us more fully understand key aspects of the project as we continue to explore the possibility of a new stadium. We look forward to working with their team in this discovery phase.”

The win adds another NFL stadium project win for Manica Architecture after the Chicago Bears chose the firm in a similar role to design a new facility on the site of Arlington International Racecourse in Chicago’s northwest suburbs.

In addition, Manica Architecture is designing $435 million in upgrades for Progressive Field, home of Major League Baseball’s Cleveland Guardians, and has teamed with Gensler to develop a proposed arena for the NHL Arizona Coyotes in Tempe, Arizona.

In Nashville, Manica Architecture’s role leaves open the possibility that it could potentially team with another firm serving as the architect of record, which typically joins the project in the latter stages of development and approves the conceptual drawings.

That was the case in Las Vegas when Manica collaborated with HNTB, architect of record, to plan Allegiant Stadium, the 2-year-old home of the Las Vegas Raiders.

The selection of Manica Architecture comes after the Titans worked extensively with Gensler to design upgrades to Nissan Stadium, which doubled in cost to $1.2 billion in part due to inflation and supply chain issues.

Over the past two months, the team changed its mind and issued a proposal to design a new stadium next to their current venue along the Cumberland River.

The Titans’ intent is to complete the new facility in time for the 2026 football season. They have proposed an enclosed stadium with the intent of pursuing the Super Bowl and NCAA Final Four.

In late April, Tennessee state lawmakers approved $500 million in public money to help finance construction. The balance of funding will come from the city of Nashville, the Titans and the NFL in the form of its G-4 loan program, according to local reports.

The Titans are among seven NFL teams pursuing new stadiums or planning major renovations of existing facilities. In addition to the Bears, the Buffalo Bills, Washington Commandos and Carolina Panthers are in various stages of stadium developments.

Populous is designing the Bills’ $1.4 billion stadium, the team announced on April 21.

In Jacksonville, the Jaguars are targeting a $1 billion makeover of TIAA Bank Field.  In that case, it would essentially be a new venue considering the level of investment. Team officials interviewed eight design firms a few weeks ago and have come up with a short list, although the finalists are unknown, sources said.

Separately, the Kansas City Chiefs have mentioned the possibility of building a new stadium on the current site of Arrowhead Stadium or potentially in Kansas, across the Missouri state line, SportsBusiness Journal reported.

All that activity in the NFL, combined with multiple renovations in the works at MLB ballparks among other venues, has teams questioning architects about their workloads and whether they have enough manpower to focus on their individual projects, considering there’s been a shortage of qualified designers, sources said.

In the case of Manica Architecture, though, it doesn’t seem to be an issue.