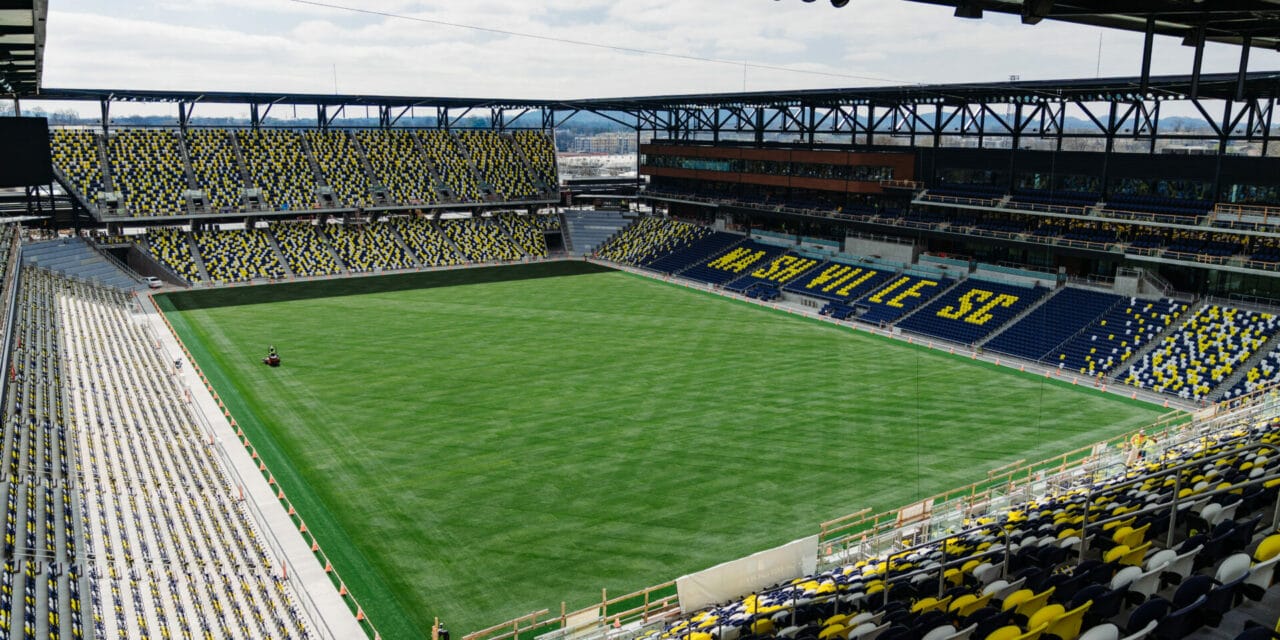 The design of Geodis Park reflects U.S. sports fans’ habits for watching soccer in a live setting, which stands in contrast to the rich traditions established overseas among European fandom.

In Nashville, where Major League Soccer’s Nashville SC christens the new $335 million stadium on Sunday against the Philadelphia Union, that’s not a bad thing, said Bruce Miller, Populous’ managing director of the Americas and senior principal.

Populous served as the architect of record, partnering with local firm Hastings as design architect. They previously teamed to develop First Horizon Park, the 7-year-old home of triple A baseball’s Nashville Sounds.

At Geodis Park, the 360-degree open concourse is a prime example of those cultural differences. Americans typically get up during a sports event to grab a hot dog and a beer, compared with Europeans who stay glued to their seats with the exception of halftime, Miller said.

In Nashville, the open views to the pitch from the main concourse — which at its widest point is 65 feet — allow for continuous interaction regardless of where fans are in the stadium, whether buying concessions or visiting the restrooms. It falls in line with seating bowls Populous has designed over the past decade at multiple MLS venues, Miller said.

In a sense, the newer purpose-built stadiums provide an educational tool as soccer grows at a rapid rate in the U.S.

“We’re trying to train our fans in this country to watch soccer continuously, which allows you to always be part of the game,” Miller said.

At the same time, the stadium’s open spaces in the corners provide views to the old state fairgrounds property where it sits and other new developments. It’s part of the Wedgewood-Houston neighborhood, another section of Nashville going through a renaissance near downtown.

For Nashville SC, it was important to be a good neighbor and fit into “We-Ho” as seamlessly as possible, given that it’s the biggest stadium in MLS with 30,000 capacity for soccer. For concerts, capacity is 27,000 with a stage that rolls out in the south end for headline acts.

The stadium architecture revolves around lots of brick and exposed steel, which is indicative of the area’s industrial heritage, Miller said. It’s a neighborhood in transition with new homes under construction and existing residential dwellings going through renovations.

“It’s feeding off the energy of downtown and extending the boundaries of what has historically been a tight downtown district,” he said. “Now, you have public assembly buildings, the fairgrounds, the (adjacent) racetrack and the soccer stadium all on the perimeter of downtown. These neighborhoods are becoming great places to live.”

Given its size, it should be a raucous environment on game days, Miller said. The supporters section on the north end accommodates 3,200 fans in a safe-standing mode, similar to other Populous projects, including Exploria Stadium in Orlando.

The large variety of premium products has been a trend across MLS for several years now, dating to Children’s Mercy Park, the home of Sporting KC, another Populous project which opened in 2011.

MLS stadium capacities have steadily increased over the past 20 years and that number will continue to grow as more teams build new soccer-specific venues, according to Miller.

As the league expands, teams in new markets have demonstrated they can fill a greater number of seats beyond the 20,000 threshold, he said.

“There’s always this balance of having the right capacity for the marketplace but the trend is certainly moving upward,” Miller said.

For Populous, things were out of balance during the pandemic, along with everybody else across the globe.

Geodis Park represents the firm’s first project in which construction documents were not issued from its Kansas City office. Instead, they were delivered from designers’ homes as they worked remotely with the office closed, Miller said.

“Our deadline was about three months after we all went home due to Covid,” he said. “We were right in a critical period and we had to keep moving. It was quite an experience, from being in one office to having 30 offices, with those 30 people all sitting in a different place. The communication stream had hiccups but we got through it.”

It was the first of several sports developments Populous delivered in that fashion before the main office reopened months later.

“We all learned a lot in that process,” he said. We’re ready to go before opening day. There’s nothing last minute about it; in fact, we were ahead of schedule. But nothing will replace face-to-face communication.”