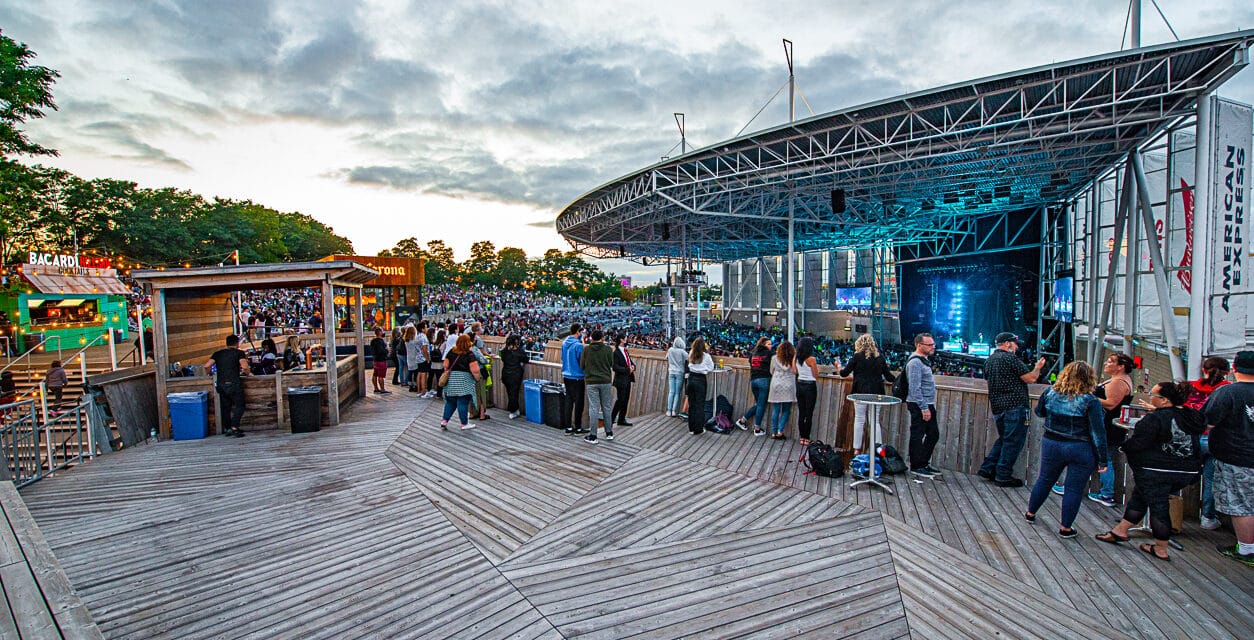 SHEDS LIKE YOU: Maroon 5 was the sole non-Canadian artist to play the normally active Budweiser Stage in Toronto in 2021. The amphitheater is ready for 60-plus shows this season. (Courtesy venue)

Toronto amphitheater Budweiser Stage, set against Lake Ontario with sailboats and powerboats in the attached marina and the iconic city skyline in view, will kick off its first full summer season since the pandemic on May 15 with a historic broadcast of the Juno Awards, Canada’s equivalent of the Grammys.

It’s the first time in the ceremony’s 51 years that it will be held at an outdoor venue and the first live-to-air awards show for this 27-year-old venue, built on the 155-acre Province-owned Ontario Place grounds and opened by Canadian Bryan Adams on May 18, 1995.

With the new private members rooftop club, Lake House, complete with concierge service, private boat shuttle and a menu designed by steakhouse Harbour 60, Budweiser Stage — a.k.a. Bud Stage — now has a 500-capacity premium space to accommodate such a red-carpet event.

Known for years as Molson Amphitheatre, then Molson Canadian Amphitheatre, until Labatt Breweries of Canada struck a multi-year partnership and naming rights in 2017, the 16,000-capacity venue — 9,000 seated and 7,000 on the GA lawn — has seen 10 million people come through its gates for over 800 shows: a diverse range of A-listers including Rush, Celine Dion, David Bowie, Whitney Houston, The Tragically Hip, Andrea Bocelli, Neil Young, Drake’s OVO Fest, and the headliner with the mostest, Blue Rodeo, who have played more than 20 shows there since ’95.

Being right by the water, there are usually guest appearances, too, by Canada Goose and Herring Gull, so venue owner Live Nation Canada, which leases the land, has long employed a hawk to keep wildlife at bay and french fries protected while fans are enjoying their concert.

“Growing up as a kid, I could never think of a better place to see shows with that breeze rolling off the lake and a view of downtown,” Zronik reflects. “Where it’s situated, and the environment itself, is just unique to the amphitheater network across North America and makes it a really amazing experience.”

With Live Nation looking at an unrestricted reopening, an estimated 700,000 fans will get to experience it, too — and the C$10 million ($8M) invested in capital projects in 2019. “2020 was going to be an amazing year for us,” says Zronik. “We had built Lake House. We had done a bunch of other improvements to the facility. We were going to have a record season, but obviously the world came to a crashing halt on March 11.” The other 2019 additions were the 150-cap Lookout platform on the lawn, the 87-cap Skyline Lounge with city backdrop and the 800-cap lakeside River Bar. “It gets people out from the enclosure or to see more of the setting,” says Zronik. But 2020 Bud Stage was closed due to COVID.

Last year, Live Nation presented only seven shows at Bud Stage, all at reduced capacity with mandatory masks (most ignored, despite signage). Three of those were from the same band, Canada’s Arkells, and only one “international,” Maroon 5, who were able to cross the border with proof of vaccination and negative PCR tests by the time their gig came up in early September.

“It was a testament to the team last year getting it open in a short amount of time so we could get that short season once the Province loosened restrictions,” Zronik says. “They did a great job.”

As the vaccine rollout continued, things were looking up. Ontario lifted all its restrictions in March and the Federal government has started to ease its border restrictions. Canada’s vaccine rates, as of March 26, are 81.9% fully vaccinated (33.1M); 85.9% with one dose; and 48% with a booster, according to Our World In Data.

“We were closed longer than the U.S. and U.K., so we rescheduled some shows a number of times and then it became a matter of, ‘Well, let’s wait until we have some certainty on this.’ So up until early this year for Canada to come into focus, and for the restrictions to be lifted and open for indoor business and get to full capacities again. And once we had that certainty, it has been great.”

With so many acts looking to reschedule or get out on the road, Bud Stage is heavily booked mid-May through early October with single or two-night runs from the likes of Duran Duran, Jack White, the Chicks, Dave Matthews Band, Zac Brown Band, Slipknot, Halsey, Walk Off The Earth, Randy Bachman and Burton Cummings, Dallas Smith, Rod Stewart, Alanis Morissette with Garbage.

It’s just like old times: no mask required; no vaccine passport to show; no rapid test to take; no social distancing needed; no reduced capacities, although in late March there had been talk of rising COVID cases in Ontario. “We’ll have a record number of shows down there,” says Zronik. “We’re excited to be able to do the 60-plus shows this year and have it going full tilt.”

And when Bud Stage reopens, it will do so as a GBAC Star Facility, “the cleaning industry’s only outbreak prevention, response and recovery accreditation for facilities,” according to the Global Biorisk Advisory Council. “It’s a certification process you go through – sanitization and chemicals used — ensuring a healthy environment for fans at shows,” says Zronik. “We went through the process of getting accredited during the pandemic.”

Besides these anomalous two years, the waterfront venue has always been a key entertainment site for music fans in the summertime. It was designed by architect Michael Moxam and built from scratch on Ontario Place, this particular stretch of land a summer tourist trap which opened in the early ’70s.

In addition to The Children’s Village amusement park and the geodesic dome Cinesphere, the world’s first permanent IMAX theater (still operating), there was another amphitheater, half the size, called The Forum with a round revolving stage and high-profile bookings (James Brown, Dizzy Gillespie, Blondie, Bruce Cockburn), free with admission. It was demolished in 1994 to make way for the new larger Molson Amphitheatre, owned by MCA Concerts Canada (now LNC).

Besides improving the concert-going experience for the fan by constructing a state-of-the-art facility with great sightlines, built-in stage-front “mosh” pit, an Adobe delay sound system, easily accessible concession areas and washrooms, they wanted to make the artist amenities front and center, providing a comfortable place to hang out backstage with six dressing rooms (two with balconies), great views, and a covered BBQ/seating area right at the water’s edge.

As the province contemplated the park’s future (attendance was dropping) in 2010, Live Nation created another venue on the grounds, the 5,000-capacity open-air Echo Beach. In 2012, the government closed Ontario Place — except for the marina, the mmphitheater, the Atlantis entertainment venue and parking — and began talking about redevelopment (which continues to this day).

Meanwhile, Live Nation asked the City if they could take up some of the abandoned space to create a food truck area with seating just outside the enclosure.

Over the past years, there have been tons of changes or additions, including the expansion and the build-out of a permanent VIP facility, American Express Lounge, a WiFi upgrade, new sound system for the lawn, brand new seats, rooftop level at the Lake House, more concession locations, cashless payment options, and more. New for 2022 range from vegan offerings by Beyond Meat, to upgraded point-of-sale systems and walk-through metal detectors for expedited entry. 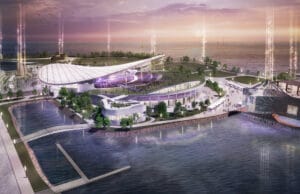 YEAR-ROUND: By 2030, Budweiser Stage will undergo a major redevelopment from outdoor summer structure to a year-round building, with ground expected to break in 2027. (Courtesy venue)

“There’s been consistent investment into the facility in terms of maintaining it,” says Zronik, “But when we were approaching the anniversary and the renaming to Budweiser Stage, we purposely set our minds to renewing the venue and setting it up for the next 20-25 years. That’s when we moved our offices. We used to be in the back of the amphitheater; we’ve got this great space that sits on the lake, and that is where the genesis of Lake House came. The transformation there has been really remarkable.”

Last summer, Live Nation announced that by 2030 Budweiser Stage will undergo a major redevelopment from outdoor summer structure to a year-round building, 20,000 outdoor capacity and 9,000 indoor, although Zronik says these are all preliminary figures. All work is done in consultation with the government.

“The past eight to 10 years, we’ve been the only thing animating that site on an annual basis. We bring over 700,000 people down there a year. Once the amusement park closed, we were the only game in town. More recently, they built Trillium Park, which is really beautiful, and then they’ve made an effort to make sure it’s accessible for everybody. We’ve always been in the middle of that, so as the redevelopment unfolds we decided to be a part of that going forward. And we think what the Province has laid out, to date, is pretty exciting.

“It will take time,” he adds. “We wouldn’t expect to be breaking ground until 2027. The overall redevelopment process of Ontario Place is going to take a while and we know that the other elements will take time. We have a perfectly functioning amphitheater down there with great amenities and we want to make the most out of those investments that we’ve made,” Zronik says.

“The fact that we’re not breaking ground for another five years means that we continue to do advancements, new design and materials, and make it as environmentally sustainable as possible, making sure that we’re using the latest and greatest.”