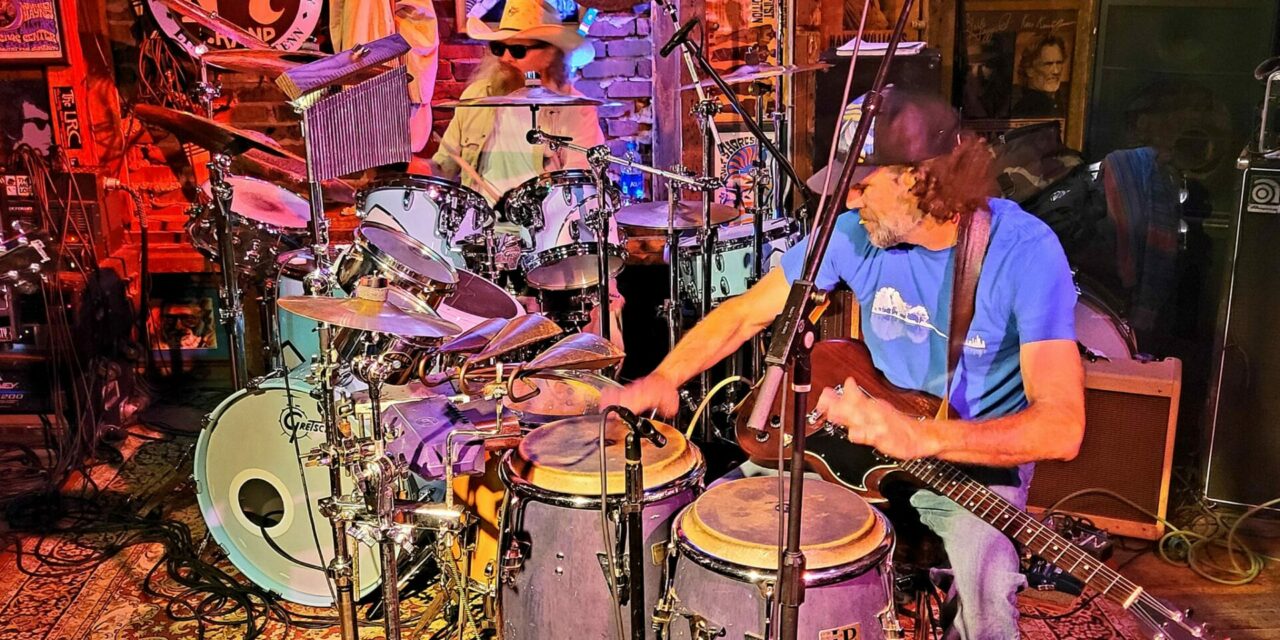 CHARLOTTE — There’s no mistake identifying the owner of the Chevy van parked in front of Smokey Joe’s Cafe. On the vehicle’s picture window are multiple inscriptions: “Rock and Roll Hall of Fame 2006,” “Lynyrd Skynyrd” and “Artimus Pyle (APB).”

One label that’s missing is “Pyletribe,” the name of Chris Pyle’s band that played the rustic bar on March 18.

Chris is the son of Artimus Pyle. The 73-year-old former Lynyrd Skynyrd drummer was among the survivors of the 1977 plane crash that killed lead singer Ronnie Van Zant, guitarist Steve Gaines, backup singer Cassie Gaines and others in the road crew.

Forty-five years later, father and son perform together in Pyletribe, a band they formed in 2014.

Chris describes the group’s sound as “southern fried tribal boogie,” which leans on the influences of African and Indian music he picked up during his travels around the globe and the three years his family spent living in Jerusalem in the late 1980s.

Coming out of COVID, they’re back on the road playing a few gigs in the southeast. Artimus and Chris are both vaccinated but still caught the coronavirus over the past few months. Artemis had to cancel his appearance on the Rock Legends Cruise in mid-February.

Two years ago, just before the pandemic hit North America, they were on the same cruise. Pyletribe and the Artimus Pyle Band, a Lynyrd Skynyrd tribute band, were part of the lineup. The ship pulled into the Cayman Islands and docked beside the Costa Luminosa, an Italian cruise line. One person had COVID-19 on that ship and it spread like wildfire on the vessel, Artimus said.

“Our captain made a good decision,” he said. “He hit those thrusters and turned that 1,400-foot-long ship around like a cartoon and we went back out to sea. We hit rough water. Our anchor got loose in its locker and we could hear it banging against the hull while we were playing this theater in the middle of the ship.”

It’s just another tale from the road they can share together. Artimus and Chris are both healthy now , focused on resurrecting the band and picking their spots to play live, whether it’s Smokey Joe’s, a funky beach-themed dive or the Dog Rose Brewing Co. in St. Augustine, Florida. 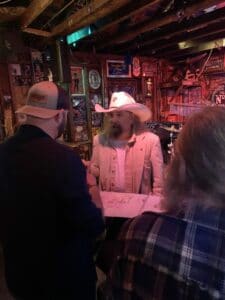 Pyletribe extends to guitarist Josh Chassner and bassist Matt Pike. Together, they recently recorded seven songs in a live format at Echo Mountain Recording, a studio housed in an old church in Asheville, North Carolina. Widespread Panic, The Avett Brothers and Greensky Bluegrass are among the groups that have recorded music there.

Those songs are part of Pyletribe’s new album, “Digging,” that comes out April 15. It will be distributed through Madison Records via Sony The Orchard, said Randy Sadd, president of Protocol Entertainment, the Atlanta firm managing the group.

To celebrate the release, Pyletribe will perform that day at American Vinyl Co., an Asheville event space where bands can play live and have their performance pressed on vinyl for delivery after the show.

Father and son both call North Carolina home now. Artimus lives in Morganton and Chris resides in Old Fort. Both towns are within 60 miles of Asheville, at the foot of the Blue Ridge Mountains. Chris’ day job revolves around remodeling homes and building new houses in the Asheville area.

“The main thing we’re trying to do right now is establish this band, Pyletribe, as a southern rock legacy band,” Artimus said. “No other children (within the Lynyrd Skynyrd family) are actively playing in bands and writing music. We have something we feel is really special. The music is different.”

Their shows mix originals written by Chris, such as “Stronger Man,” with Lynyrd Skynyrd tunes including “All I Can Do is Write About It.” The Pyletribe setlist may also include “Black Creek,” “Curse” and “Rattlesnake,” three songs on the soundtrack to Street Survivors: The True Story of the Lynyrd Skynyrd Plane Crash, the film Artimus helped produce that was released in 2020.

“I play Chris’ songs with the same fervor and ferocity that I play Lynyrd Skynyrd songs,” Artimus said. “I’m 100% committed.”

Chris toured with the original Lynyrd Skynyrd when he was 5 years old, said Tracey Wade, Pyletribe’s co-manager. In 1987, he was a drum tech for the Skynyrd tribute tour.

In Israel, Chris saw the death and destruction between Jews and Arabs. Women suicide bombers, for example, were blowing up the same buses Chris rode during his teen years.

“It got crazy and we had to pull the family out of there,” Artimus said.

Years later, Chris backpacked around the world and collected musical instruments. He started as a drummer like his father and picked up the guitar about 10 years ago.

In the early 1990s, Chris played drums with Royal Trux. The band was part of the grunge wave and at one point had a record deal with Virgin Records before breaking up in 2001.

For Pyletribe, Chris sings lead vocals and plays guitar, drums, flute and bongos. “I’ve tried to cross breed all my loves with heavy percussion,” he said.

“The biggest thing with Chris is, like every band they want to get somewhere and make it big, but he has this hunger to share his music,” Wade said.  “It stems from such an important and remarkable time in his life.”

Said Chris: “We’re keeping at it with the music and rehearsals and excited to start playing again. We’re trying to book more shows and get out there and play because that’s what we do.”