Nitro Circus heads back to the minors 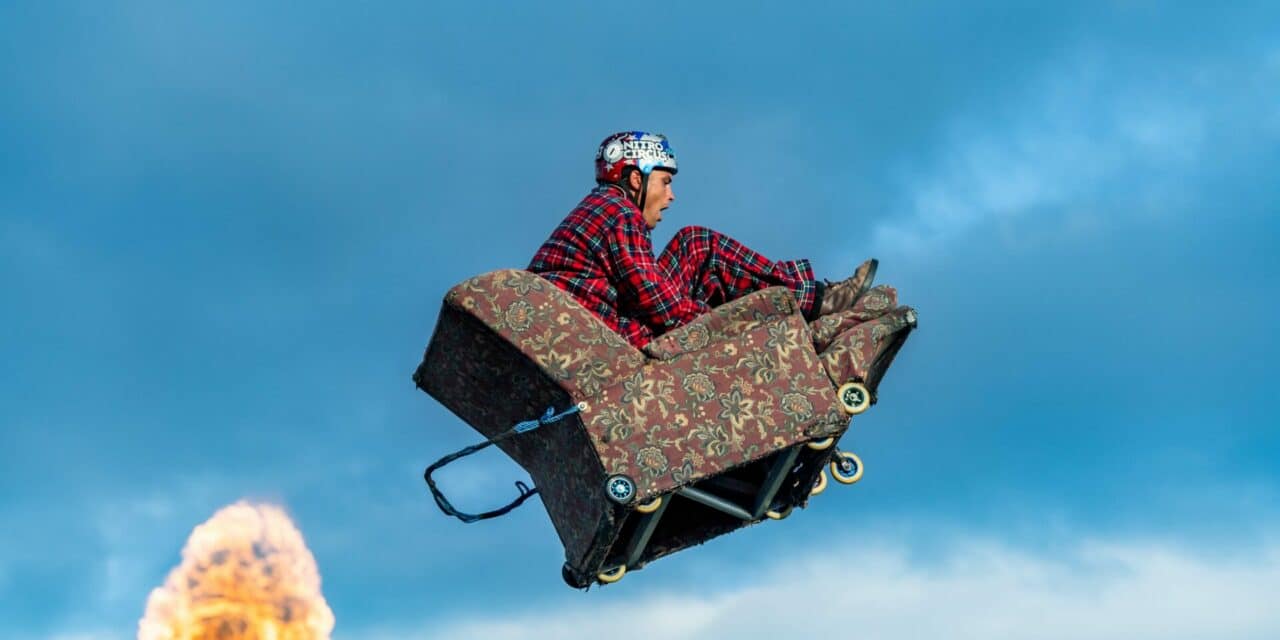 About one-third of the venues will host Nitro for the first time Ziff said after returning from a trip to Australia, where Nitro Circus wrapped an eight-city tour of its “You Got This” tour.

Playing minor league venues gives Nitro Circus deep penetration into markets where fans would otherwise have to travel long distances to catch the show in a major city, he said.

“They offer us a really nice community footprint and they are typically some of the largest venues that exist in some of the places we go,” Ziff said.

Several venues that had the show previously, like Greater Nevada Field — home of the triple-A Reno Aces, where Nitro is due to play on July 1 — were hot to bring Nitro Circus back.

Others, like Cheney Field, home of the triple-A Tacoma (Washington) Rainiers, were eager to get in on the high-adrenaline action as first timers.

“This will be the fourth year that we’ve had it,” said Brian Moss, vice president of business development for the Reno Aces. “It’s a great event, different clearly than baseball, but we are always looking to offer different forms of entertainment to northern Nevada.”

Northern Nevada is a hotbed of extreme sports enthusiasts and the same is true for Tacoma. Both regions have abundant outdoor recreation options close at hand.

“They’ve had success in the greater Seattle area,” said Nick Cherniske, assistant general manager with the Tacoma Rainiers, who run the city-owned Cheney Stadium. “Last time they made their way through western Washington wasn’t in a baseball stadium, so we were fortunate when their booking team reached out to me. I’ve been personal fan since the inception of the show. It was an easy yes.”

Thrill One recently announced that A Shoc has signed on as its official energy drink and is presenting sponsor for “Good, Bad and Rad.”

Speaking of the difficulties wrought by the pandemic, Ziff said Nitro had just announced a tour of about 10 stops for 2020 when COVID-19 began spreading in earnest, prompting shows to be rescheduled to 2021. “We went through the same process a lot of event companies did, trying to figure out what we would do,” he said.

By mid-2021, focus shifted back to touring and Nitro mounted a tour of more than 21 well-attended dates.

“We were one of the first companies to complete a full touring cycle in North America beyond, I think, the Hella Mega Tour,” Ziff said. Playing outdoors was fortuitous, given concerns about the airborne virus, he said.

Moss said Nitro’s production crew has load-in and load-out down to a science. Ziff gave much of the credit to tour manager Michael Long, who used to work with Aussie rockers Inxs.

The tour uses inflatable landers, cutting load-in time to about 18 hours, and is focused on field protection, traveling with its own Teraplas field cover system.

“We use one of the best in the business to help us identify market demand pricing for every price level in every individual market,” he said. “We don’t have a uniform market strategy. We price to the market’s needs, which has been a healthy additive to ensuring that we have affordable tickets at many levels.”

A number of exclusive and VIP options have been introduced. A new one, Club Nitro, is being rolled out on “Good, Bad and Rad.”

“It’s a club that is on the field, in the production, meaning you are right there next to ramps and landers in your own all-inclusive environment,” Ziff said. “It comes with the ability to meet athletes, hang out and do it right on the field with the performers during the show.”

Ziff, previously chief marketing officer with the NFL Los Angeles Chargers, has worked with multiple pro teams. Thrill One is exploring IP-based connections to other entities in the aim of broadening the Nitro Circus audience, he said.

“A perfect example was the ‘America’s Got Talent: Extreme’ show, where we were heavily featured,” Ziff said. “That might be an example of where we see ourselves. Whether it’s ‘Ridculousness’ or “AGT: Extreme’ or maybe a band, we are looking at ways of influencing the future by connecting other like-minded brands.”

“However, you’ll see a lot of moms and young people 18-24 and a lot of kids, especially when we’re in that minor league footprint,” Ziff said. “Those are family welcoming environments. The brand is little bit more PG-13. Our bullseye target is around 22 years old.”

As Nitro Circus concludes the regional run of its “You Got This” tour in Australia, company officials are planning a return to larger cities down under, where indoor dates will come into play, Ziff said.

“We’ll be back there later this year in New Zealand after the Nitro World Games, which are in Brisbanein October, for a New Zealand tour,” he said. Nitro plays mostly at Australian Football League and National Rugby League stadiums with capacities of 10,000 to 30,000.

The run through Australia is a regional tour of smaller markets, likely to be followed at some point by a circuit through capital cities like Sydney, Brisbane and Melbourne, Ziff said.

“That will probably usually include more of our indoor model, so that would be in our future in the next year or two,” he said.

Extreme sports are huge in Australia and it’s where Thrill One was founded, Ziff said.

“It’s always been a stronghold for us in terms of its support for our properties and quality athletes come from Australia and New Zealand, so it’s kind of a second home now,” he said.