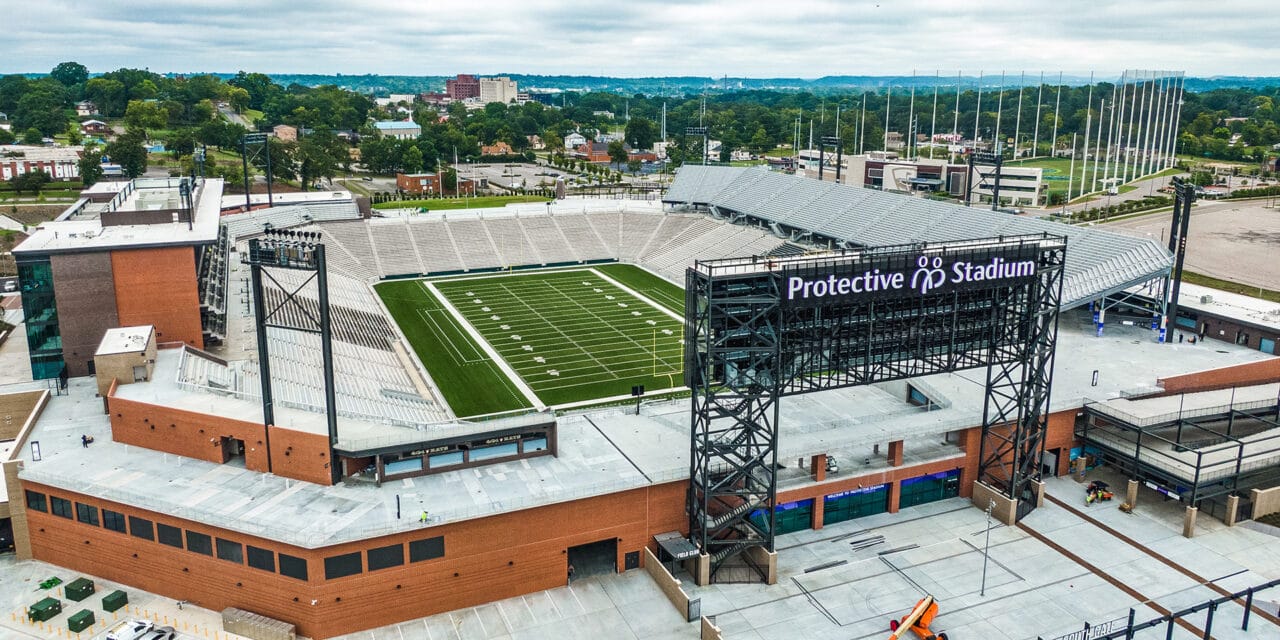 Four years after resurrecting its college football program, the University of Alabama-Birmingham this weekend will christen Protective Stadium, the new $200 million facility that sits in the heart of downtown Birmingham.

UAB, a member of Conference USA, plays Liberty on Saturday at the 45,000-capacity venue. It’s the first of five home games for the Blazers this season at their new digs.

The stadium, funded by three public entities, plus the university and corporate partners, is part of the Birmingham-Jefferson Convention Complex.

The overall development extends to Legacy Arena, which is part of the complex and undergoing a $125 million renovation for a building that opened in 1976.

Populous is the architect for both projects.

For Kansas City-based Populous, the stadium completes a journey that began about 20 years ago, when Populous started working with BJCC to form a master plan tied to Birmingham’s uptown entertainment district. The district’s six restaurants, two hotels and the Alabama Sports Hall of Fame are just south of the new stadium, and a Topgolf entertainment venue is across the street to the east.

At one point, Birmingham’s plan was to build a $500 million all-purpose dome for college football and basketball. Over time, it morphed into a new open-air stadium and an effort to revitalize the 19,000-seat arena.

“It may be the longest marketing project we’ve ever had,” said Jim Swords, a principal with Populous and project manager involved in both jobs. “Dennis Wellner and Jon Knight worked on it and they’re both retired now.”

The stadium itself stands out for its location in an urban setting rather than a college campus. The facility’s south side faces downtown and the north side faces a residential neighborhood more parklike in scale. 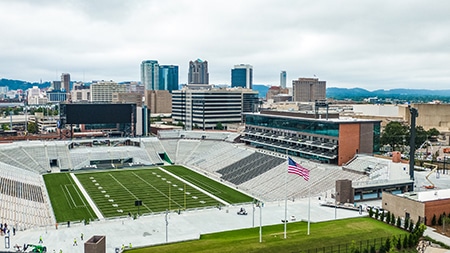 Downtown Birmingham is just south of the stadium. (Courtesy BJCC)

“It’s a one-of-a-kind building in that respect,” Swords said. “It fits right into the site. It’s not like it’s in a big sea of parking. It’s nestled into city blocks. Some stadiums on a college campus rise up above everything else, like a skyscraper. This is different, designed to fit all their needs.”

UAB is the primary tenant at Protective Stadium. The school shut down its football program for 2015 and 2016, but the program came back in 2017 and has played home games at aging Legion Field.

The new stadium will also play host to soccer and concerts and the Alabama state high school football championships. It’s also the new home of the TicketSmarter Birmingham Bowl, matching teams from the American Athletic Conference and Southeastern Conference. This year’s game is Dec. 28 on ESPN.

UAB’s green and gold color scheme is restricted to locker rooms and a recruiting lounge. The color palette is more neutral to fit all events, and that was the intent, Swords said. The stadium’s black steel and red brick finishes coincide with other Birmingham structures in a city known for its history as a steel manufacturing hub.

The seating bowl features an open concourse with views to the field.

The four-level suite tower on the west side encompasses 34 suites distributed between two floors. They were all sold in advance for $50,000 annually. The 20,000-square-foot stadium club is on the first level, supporting 1,700 club seats.

The press box sits on the tower’s fourth level.

Undeveloped space at the south end could be used to build a potential club, which would be perched 6 feet above field level. About 300 seats fronting that space will be used this season for UAB recruits and other special guests.

School officials, in tandem with the BJCC, want to get a season under their belt and determine the interest for a field-level club before they build it, with the goal of selling naming rights to the destination, Swords said.

Sodexo Live, formerly Centerplate, runs the food operation after signing a 12-year deal, matching the existing agreements that the concessionaire has at the arena and the convention center.

In June 2019, Birmingham insurance company Protective Life acquired naming rights in a 15-year, $15 million deal. Populous worked with the company to integrate its brand into the stadium. Midway through the project, Protective Life changed its logo, which caused a bit of a scramble, but signs with the updated logo were completed and look nice, Swords said.

Daktronics produced the videoboard in the south end. It measures 6,336 square feet and ranks among the biggest screens in college football.

Brasfield & Gorrie, the general contractor, built the stadium in the middle of the pandemic, which was pretty amazing, Swords said. It helped that three local design firms, Populous’ project partners, were on site when officials from Kansas City were not allowed to travel.

“We used a lot of electronic media, lots of Zoom calls, which we do now anyway,” he said. “We were able to work through that pretty seamlessly, and as soon as we could travel, we were back down there. It was difficult, but you’ve got to do what you do and get it done.”

Legacy Arena is scheduled to reopen in December with a new lobby addition, new suites, an arena club, updated concourse, and all new seats, plus new restrooms and concessions. Swords thinks local residents are in for a big surprise.

“Everyone can see what’s going on with the stadium because it’s outdoors,” he said. “At the arena, even though it’s (almost) 50 years old, it will look brand new. Both were a huge financial commitment from the people of Jefferson County and Birmingham. It’s something the city deserves. The quality of life is great there, but it will be even better.”