‘Venues Will Be Busier Than Ever’ 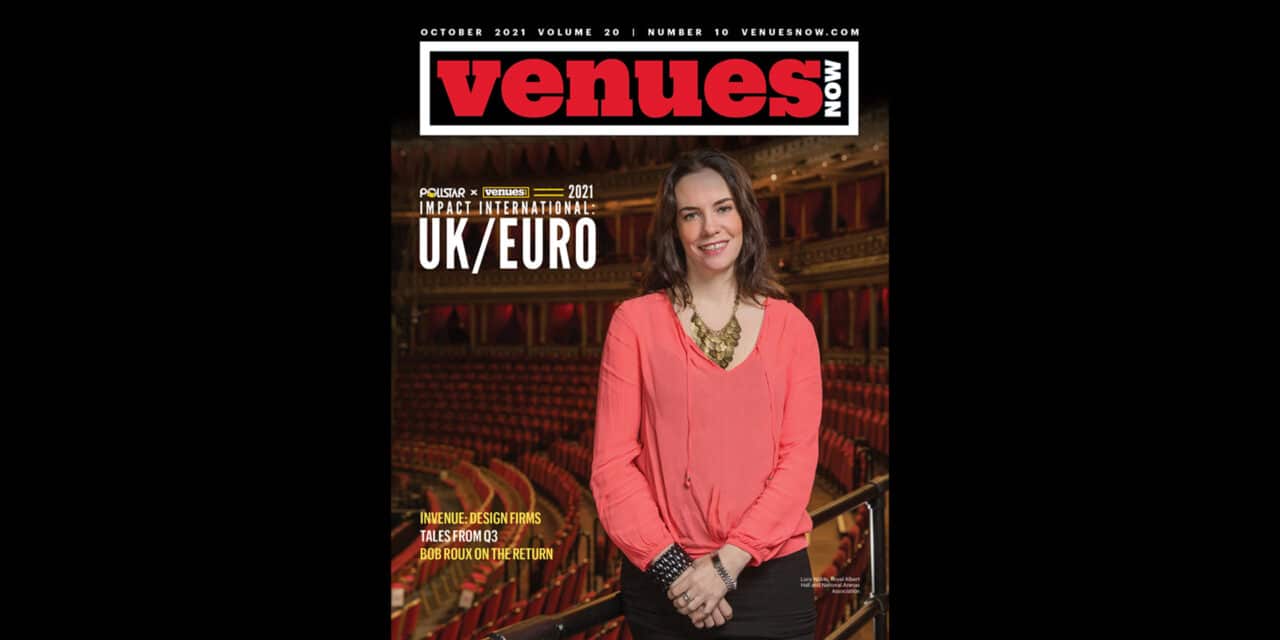 Lucy Noble was part of the 2021 class of Impact International: UK/Euro honorees.

Lucy Noble is the artistic and commercial director of the Royal Albert Hall, and the chair of the National Arenas Association. She is also the chair of the venues subcommittee of the U.K. industry body LIVE, or Live music Industry Venues & Entertainment, and the cover subject of VenuesNow’s inaugural Impact International: UK/Euro list of honorees.

The hall has probably been one of the busiest venues across the summer months in the U.K., thanks to hosting the annual BBC Proms. According to Noble, “It’s been a great place to be to get ready for our jam-packed autumn season.” The U.K. lifted all capacity restrictions July 19, and the Royal Albert Hall hosted its first full-capacity event since March 2020 on that very night: David Arnold’s Circle of Sound. The concert also kicked off the hall’s 150th anniversary celebrations.

No wonder that after what has been an extremely challenging last 18 months, Noble allows herself to feel “positive about everything getting back to normal.”

What has kept you busy over this past year and a half?
A lot of my time has been taken up on the overall industry side as part of my role with the NAA and (LIVE). … We’ve been working with government and other groups to try and get back to putting performances on as well as giving support to other groups within the industry.

The Royal Albert Hall has also been very busy, and what’s been very interesting about this period is that we’ve been able to host a few new things that otherwise might not have come to the hall — for example, the nightclub Fabric came live from the hall and we had a fabulous evening from Glitterbox too.

I’m currently thinking about how we enhance the hall’s live brand digitally as well as how do we make more money to pay off the large debts that we now have as a charity after the pandemic. The live performance and audience experience will always be the most important though, and of course we’re excited to get back to it all.

You’ve been on the forefront of this industry’s efforts to get back to business. What were the biggest milestones in that regard?
The first milestone was recognition of the music industry by government. I remember going to one of the very first (Department for Digital, Culture, Media and Sport) meetings and we just didn’t have a voice — at all. We then worked for the next few months to collate the evidence to show what a crucial and substantial part of the entertainment industry music is. The latest news of an insurance scheme is also positive. Many on the LIVE Group have worked tirelessly to try and achieve that.

At the hall, we were the first venue in the country to have a full capacity performance and it fortuitously was also our 150th anniversary concert with David Arnold. It was a big moment to finally be back.

Do you feel like the formation of LIVE, of which the NAA is a member, has helped? And do you feel like decision-makers understand that live entertainment professionals are the most adept at handling large crowds safely inside buildings?
The formation of the LIVE Group has been integral during the pandemic, and as well as with COVID issues, it’s already dealing with a host of other matters that impact the entire industry. I have felt throughout this pandemic that government don’t really understand our industry and the value of it and that has been a real problem. Venues have certainly been set aside from other leisure activities and it was difficult for us when pubs were opened without restrictions and we still weren’t open.

When will the 150th anniversary party at the Royal Albert Hall begin?
It’s begun already but what we’ve decided to do is extend it through to the end of 2023. We’ve had to forgo a few events that were planned — but there are some very exciting things to come and we’ve been working with the chairman for our 150th committee, Neil Warnock, to get a great lineup on the stage over the coming years.

What are your main takeaways from this past year and a half?
I’ve learnt that you can’t take anything for granted! Who’d have thought that our industry would drop off a cliff edge like this — it’s been terrifying.

Any personal takeaways?
I think the closure of the hall has also underlined just how integral the live music experience is to people’s lives. The joy, energy and excitement of live performance is something that you can’t replicate in any other way, and that escapism has been sorely missed during this incredibly trying time.

For me personally, one really positive thing is that I’ve made some great new industry friends during the pandemic: heads of other associations, other key venue people, agents, managers and so on — we’ve all worked together for the first time, and I’ve loved it. I hope that long continues.

How have you motivated and led your teams through this challenging time?
I’ve tried to remain positive, but I have to say it hasn’t been easy for any of us and my teams working in this environment. We’ve spoken very openly within the teams about wellbeing during this period. They have all done an amazing job.

What do you predict in the coming year for the venue business?
Venues will be busier than ever — we’ve all rescheduled 18 months of events so there are lots of shows ready to go out there. For those who made redundancies, there is the concern of finding those who are skilled to work in our business. Many have changed careers during this period. Retraining will be required in many cases, and the loss of those skilled workers is a real shame.

What do you consider your biggest accomplishments in your career and why?
I’ve been at the Royal Albert Hall for a long time, but that hasn’t stopped me being able to undertake new activities. I’m proud of our engagement and community program which reaches out to around 200,000 people each year, and now includes initiatives like the Songbook program — where musicians bring live music to care homes and hospices — and workshops for young people hosted by world-famous artists.

In recent years, we’ve started a touring arm of the hall’s own productions as well as producing and (promoting) around 20% of the calendar — I’ve been very proud of that. Our first Christmas season was a real high.

Most recently I’ve been proud to have a voice within the music industry more generally and to represent with government.