Uncovering the Roots of Sports Design in KC 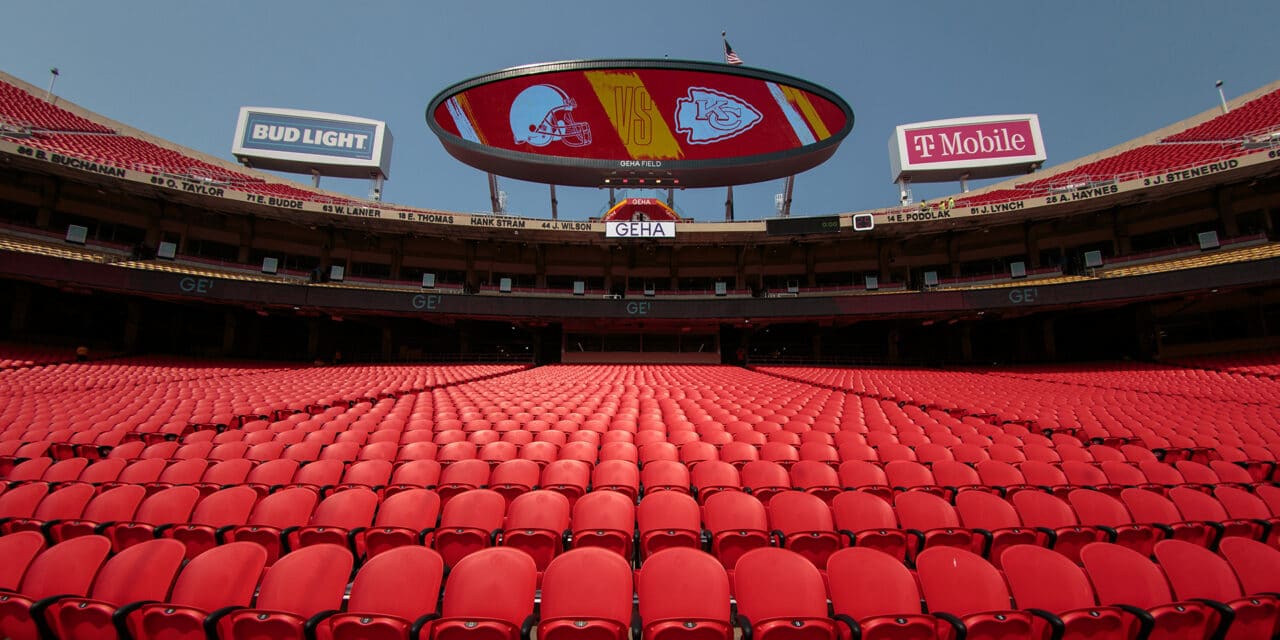 Tom Waggoner’s book, to be published later this year, focuses on the development of Kansas City’s Arrowhead Stadium (above) and Kauffman Stadium. (Getty Images)

Tom Waggoner has traded his sketch pad for a writer’s tablet. The veteran architect has written a book detailing the history of sports facility design in Kansas City, Missouri, where Waggoner plied his trade for 38 years at multiple firms.

The book, to be published by The Covington Group, is titled “Designed in KC: How Kansas City Became the Sports Architecture Capital of the World.” It is expected to run about 150 pages and be on the market by Dec. 1.

David Smale, a local writer, is serving as Waggoner’s editor.

The book has been a labor of love for Waggoner, who left HOK in June 2020 but has been serving as a consultant for the $52 million expansion of the south end zone at Kansas State University’s Bill Snyder Family Stadium.

Waggoner worked on the premium seat addition while he was still employed with HOK.

He has spent four years researching and writing the book and interviewing several architects, many of whom have been his colleagues over the years at the old Ellerbe Becket, CDFM2, 360 Architecture and finally HOK.

At one time he looked at getting a master’s degree in architectural history while still in college at Kansas State.

He never followed through with it and did not realize how challenging it would be to document the origins of sports architecture in Kansas City, which is full of talented designers of arenas, stadiums and other venues.

“I have a whole new appreciation for those of you writing about the industry,” Waggoner said. “I couldn’t believe how much I learned and how much I actually thought I knew that I was not correct on … stuff about how HOK Sport was developed, to be honest.”

The book’s focus is tied to the development of Arrowhead Stadium and Kauffman Stadium, the NFL and MLB venues that sit next to each other as part of the Harry S. Truman Sports Complex.

Those two buildings opened in 1972-73. Each had a unique design that was a departure from the dual-sport doughnut-shaped stadiums that had recently opened in Cincinnati, Pittsburgh and Philadelphia.

But it was Ron Labinski, co-founder of HOK Sport, who at the time was with Kivett & Myers and worked on those projects, that figured out there was a market for sports architecture in general.

Labinski, among others, launched HOK Sport in 1983, which eventually morphed into Populous in 2009.

Other firms such as Ellerbe Becket, now AECOM, and HNTB followed suit as the pursuit of sports venue development expanded over the years with a big building boom in the 1990s.

The branches extend outside of Kansas City to NBBJ, RTKL, Future Cities, Gensler and HKS, among the firms where Ron Turner, Dan Meis, Michael Hallmark and Bryan Trubey landed after leaving town in the 1990s.

All told, Waggoner talked to about 35 individuals representing 15 architecture firms. He gobbled up as much information as he could and drew a linear timeline over a stretch of more than 50 years.

He spent a lot of time visiting the Kansas City Public Library going through the archives of various publications and the Missouri Valley Special Collections, the library’s local history archive, which interviewed Labinski about 20 years ago.

“I tried to graphically explain (the growth) in the book and wrote a bio of every firm I could identify,” he said. “It’s been a blast to talk to all these people, and almost everybody has been willing to tell their story and why they left (one firm and joined another), to a certain degree.”

Waggoner, who moved across a few firms during his career, is part of that story.

“Bill Johnson and I came out of Ellerbe Becket and Brad Schrock and George Heinlein came out of HOK Sport and we formed 360,” he said. “The funny part is we all changed names and tried to explain the confusion that nobody really understands, especially on the client side.”

Brand identity aside, Waggoner said the book is intended to serve as a celebration of sports design for Kansas City and the venue industry as a whole.

“It’s a great local story,” he said. “In some ways, I’m doing it to honor the generation ahead of me that got all this stuff going, guys like Gordon Wood and Dennis Wellner. I got involved in 1988 and never left. I hope the book allows other stories to come out.”

“There’s more to it,” Waggoner said. “When you start asking people questions, you’re going to get a variety of stories and eventually you’ve got to land on what you want to write. It’s been a real honor to be part of trying to figure this out.”