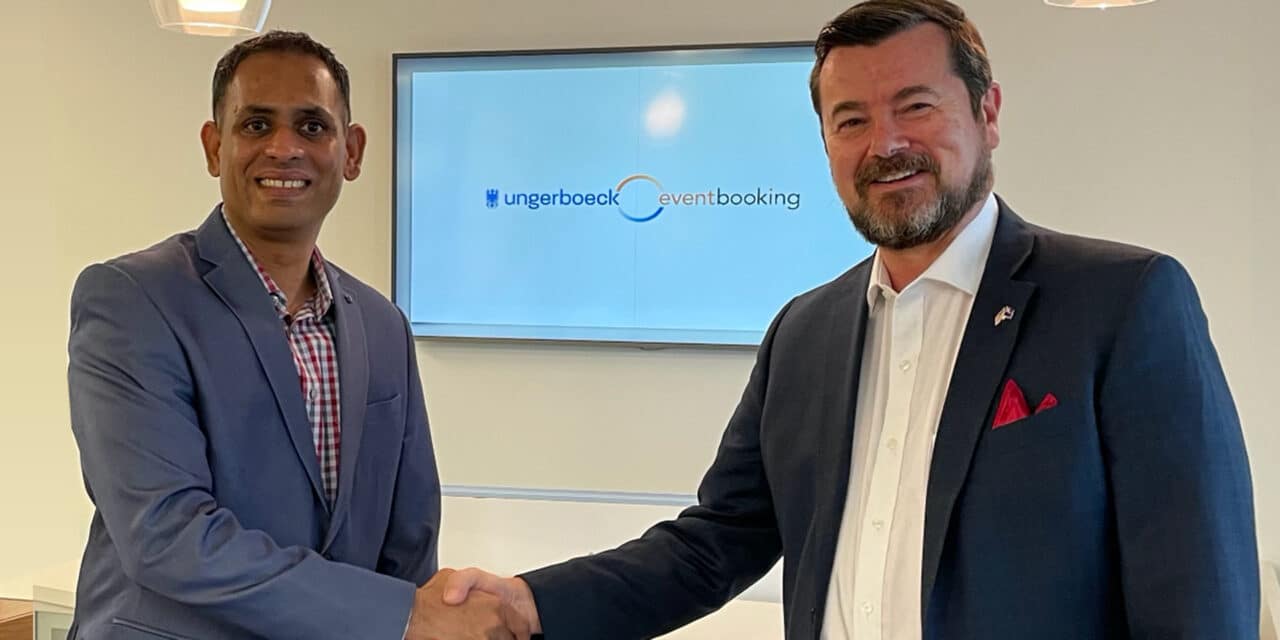 Manish Chandak of Ungerboeck (left) and Steve Mackenzie of EventBooking will remain part of the merged company’s leadership. (Courtesy Ungerboeck)

Two of the top players in the event and venue management software sector are joining forces.

The pandemic gave both Chandak and Mackenzie a chance to consider the wisdom of a merger, which stemmed from informal conversations they had been having as they regularly crossed paths in their extensive travels. (Mackenzie said he was informed by American Airlines in 2019 that he was among the carrier’s top three customers in terms of miles flown).

It was a matter of thinking bigger, smarter and outside the box regarding things like “coopetition” with erstwhile competitors, they said.

Also driving the merger was Cove Hill Partners, a private equity firm with more than $2.5 billion committed by investors and founders, that is providing growth equity to Ungerboeck.

Cove Hill saw an opportunity to invest at a time when the live event industry was reeling, with the understanding that it would return, albeit somewhat transformed, with a vengeance, just as airlines are rebounding from the near-death experience of the shutdown, Chandak said.

Ungerboeck had been seeking investment capital for a while before the merger was announced, but once the funding was committed, the pace toward combining the two companies quickened to “rocket speed” as the leadership teams of all three companies met about two months ago, Chandak said.

He declined to discuss the deal’s financial specifics.

Though the top executives are part of a unified management structure, there won’t be an immediate move to combine the companies’ personnel and systems, both Chandak and Mackenzie said, and both brands will continue to be used.

As opposed to reducing headcount, Chandak said, it’s more likely that the company will end up adding employees.

“We will integrate at the vision level first, to see where we want to go,” Chandak said. “The (EventBooking) VenueOps platform and the Ungerboeck platform are both very good, so we are not in a hurry to come up with some sort of unification and integration strategy. We don’t want to disrupt our customers’ businesses. They’re happy with those platforms. That’s great. We’re just bringing another choice to them now, but that’s not really our first step that we are going to take on. What we’re going to take on is where does this take us from our vision standpoint in year two and three and what does that look like.”

The least disruption to customers the better, Mackenzie said.

“We want our clients to continue being successful doing what they’re doing and using whatever platform they want to use. We’ll just try to make that easier for them,” he said. “The focus of the integration right now is on our teams and bringing our people together and making us think collectively as one company.”

Ungerboeck — which is based in the St. Louis area but has a regional presence in Germany, France, Mexico, England, Australia, China, Hong Kong and Singapore — has over 50,000 users in more than 50 countries, while Knoxville, Tennessee-based EventBooking has more than 1,000 venue clients in 24 countries and boasts a 99% customer satisfaction rating.

Both companies offer software as a service, SaaS, through subscription models.

“We’re making progress in other parts of the world, and at performing arts centers,” Chandak said.

“Venues like convention centers, they’re not in the core technology business. We are,” Chandak said. “If we can make it easy on them by bringing a lot of different capabilities that integrate and talk together, it makes our customers’ lives much easier.”

In the hospitality sector, adoption of new technology typically takes time, Chandak said, but the pandemic has changed that as companies, teams and venues have either launched or accelerated things like touchless transactions.

Mackenzie said one venue he spoke with is using digital displays in its kitchens to replace paper orders.

“It’s a big benefit coming out of the pandemic that people finally are starting to think more in a digitized way,” he said.

EventBooking was started in the U.S. and primarily served domestic live entertainment venues but in recent years has opened offices in different parts of the world. It’s Ungerboeck, however, that brings a more extensive roster of overseas clients to the table, Mackenzie said.

“That was one of the great things that we saw in the merge together is Ungerboeck’s got a phenomenal maturity level in the international realm,” he said. “Being able to have that international presence and all of that expertise is just going to help as a merged company together.”

Having people that understand the nuances not only of language but customs and ways of doing business will be an essential aspect of Ungerboeck’s growth strategy as most new opportunities exist outside the country, Chandak and Mackenzie said.