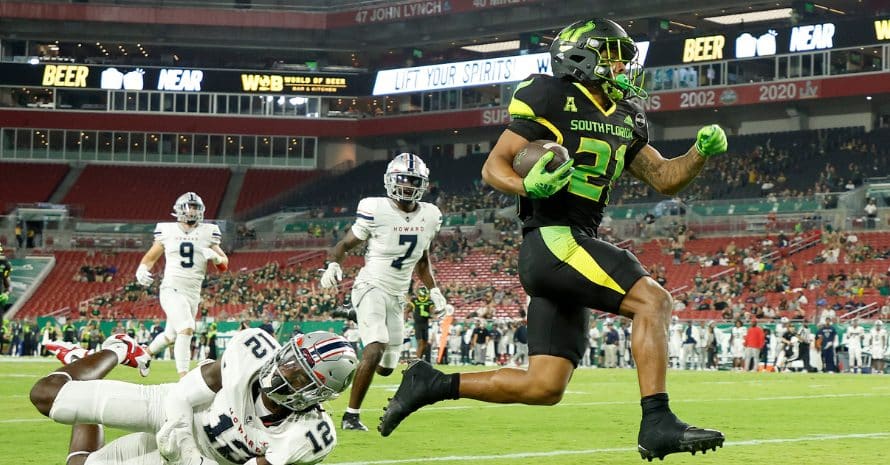 STEP UP: The University of South Florida will build a new football stadium on campus after playing home games at Raymond James Stadium since 1997. (Getty Images)

On Sept. 6, USF recommended the design-build team of Populous and Barton Malow to develop a 35,000-capacity, privately-funded stadium. The site is Sycamore Fields, current home of intramural sports on the east side of campus.

The selection must still be approved by the USF Board of Trustees over the next few weeks. South Florida has played home games off campus at Raymond James Stadium, home of the NFL Tampa Bay Buccaneers, since its first season in 1997.

Kelly cited both firms’ extensive portfolio in the college space as the primary driver for the recommendation.

Populous and Barton Malow, combined, have worked on 85 college football venues, according to USF data. Over the past 15 years, the list covers new builds at Baylor, Minnesota and Colorado State and renovations at Michigan, Penn State and Rose Bowl Stadium. Together, they have collaborated on 40 sports venues.

In Tampa, the 27-acre site, just north of where USF is building a new $22 million indoor practice facility for Bulls football, is the best location logistically, Kelly said. It also has historical ramifications. Twenty-five years ago, when the football program started, the team practiced at that site.

“It will be nice that we had our first drops of blood, sweat and tears where our long-term stadium will be,” he said.

To date, there is no project cost. USF hopes to come up with a formal number by the end of the current fiscal year, June 30, 2023, which comes about halfway through the 14 to 18 month design schedule, Kelly said.

Financing will come from philanthropy and private fund-raising, Kelly said. In March, donors Frank and Carol Morsani provided a $5 million gift to help kick-start the project.

Design-build, a process which consolidates facility development with one entity working under a single contract from concept to completion with the general contractor in control, typically leads to faster construction and keeps bids as low as possible.

Kelly said current volatility in pricing and delivery of construction materials drove the decision to go design-build. It should help Populous and Barton Malow make decisions in real time and adjust the budget if necessary with more seamless collaboration, he said.

CSL International did initial market research for stadium specifications before USF took over that exercise. The number of premium seats remains a fluid process with more consultants expected to be hired in the future to help determine demand.

USF plans to sell naming rights for the new stadium with a mix of corporate deals and philanthropic agreements, Kelly said.

School officials have toured Baylor’s McLane Stadium, and will see Houston’s TDECU Stadium firsthand when the two American Athletic Conference institutions play there on Oct. 29. Both buildings opened in 2014.

USF home attendance at 65,890-seat Raymond James Stadium has been relatively lean in recent years. Crowds averaged about 21,500 for the 2019 and 2021 seasons, reported by The Oracle, USF’s student-run publication. Poor on-field performance and the lack of on-campus stadium are factors causing lagging attendance, The Oracle said.

School leaders hope that all change sat a new venue integrated within USF’s athletic district. As of fall 2021, USF had about 33,000 undergraduate students, according to data compiled by U.S. News and World Report.

“We have a chance to build the very best stadium we can afford — right sized for us and designed for us,” Kelly said.