Bigger ‘Shoes’ to Fill for Chesney 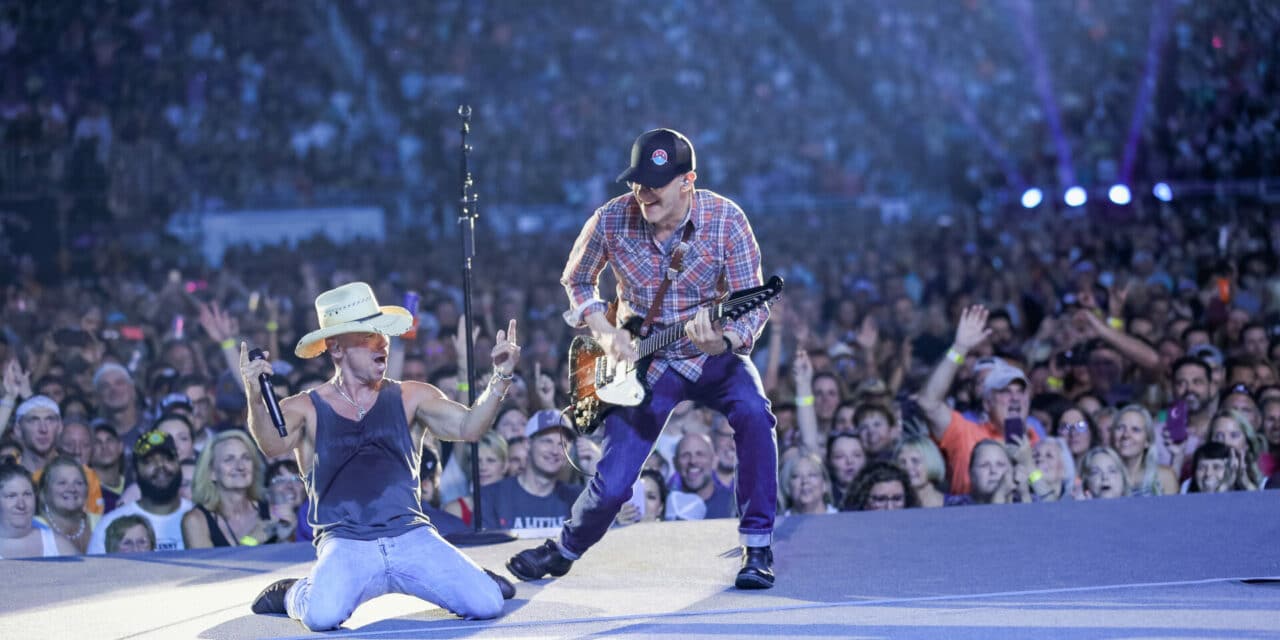 THERE GOES MY TOUR: Kenny Chesney with Kenny Greenberg at Detroit’s Ford Field, where he performed for the 11th time on Aug. 20, 2022, before a crowd of 49,725. (Photo by Jill Trunnell)

When Kenny Chesney walked offstage at Gillette Stadium on Aug. 25, 2018, he would never have guessed it would be four years before he’d set foot on that stage again. But even with rescheduling the tour due to the pandemic, a change of line-up and waiting more than 1,000 days to ramp back up, Chesney’s “Here and Now 2022 Tour” saw the high-energy performer sell 1,296,079 tickets.

With two hour-plus sets, surprise guests and Chesney’s SiriusXM No Shoes Radio channel capturing all the action behind the scenes and in the parking lots, four guitars and a show that never slows down except for an occasional ballad, the “Here and Now 2022 Tour” took the anticipation and turned it into pure energy. Sponsored by Blue Chair Bay Rum and Marathon Oil, it continued Chesney’s decade-plus of million ticket-selling summers.

“The thing about Kenny is the show is really about the fans and the fun in the moment,” said Kate McMahon, executive vice president of Messina Touring Group, and who handles marketing for the Austin, Texas promoter. “I’m a big believer in ‘music as medication,’ and that there is a show for whatever feeling you need.”

“Kenny came back when we all needed to feel fun and alive and leave the sadness and stress of the pandemic behind, even if just for a few hours,” McMahon said. “At the very first show, the overall vibe was grateful and it permeated from the bands, the crew, the fans. Maybe this is too sappy, but we all got a glimpse of life without live shows, and when the opportunity came back, we all embraced the hell out of it.”

It was a summer to remember for the eight-time entertainer of the year, as awarded four times each by the Country Music Association and Academy of Country Music. It was not only the longest he’d gone without playing shows since his emergence as a headliner, it also marked a year where – in an attempt to accommodate the increased demand for tickets – the stage was moved further back into the end zone in several markets.

“I wanted anyone who wanted to come to be able to,” Chesney wrote in an email. “Having waited so long for music to come back, I know that wanting to get out there and feel alive again, that feeling only a concert can give you. Honestly, being on stage has never felt that electric! No Shoes Nation has always been a very passionate place, but this year, the energy was unlike anything I’ve ever experienced.”

Rome McMahon, Messina Touring Group executive vice president and Kate’s husband, handles finance and routing. He found himself working with stadium managers and tour personnel to create more seats as demand increased. In some markets, the stage was so far in the end zone, there was no passage from one side to the other on the actual field. 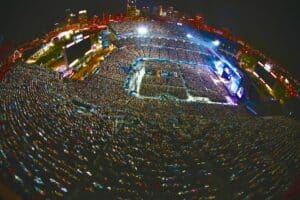 NISSAN NUMBERS: A view of a sold-out Nissan Stadium, where Kenny Chesney set a personal single-day  attendance record of 57,211. (Photo by Jill Trunnell.)

“Once the stage is in position, we always go in and open as many seats as possible,” Rome McMahon said. “The most important thing is to make sure the fans can always see Kenny and have a great experience. The show was built with that in mind, with swept back side video screens and targeted sound coverage all the way up the sides.”

“We try to minimize the upstage footprint as much as possible to squeeze back a few more feet where we can and where we need it,” he said. “All this effort translates into more seat inventory, because demand for this tour was incredible. The amazing thing was the majority of the fans held onto their tickets, many for over 1,000 days just to see Kenny and this tour. There was always demand for any refunded tickets once we re-opened them.”

“We didn’t know what the time away was going to mean,” Chesney wrote. “You want to believe it will be the same, but four years is a lot of time, especially the way everything moves so fast. We were all surprised at how many people held their tickets for so long, but that’s the thing most people miss about No Shoes Nation: they’re invested in this culture we’ve built together.”

“What became obvious starting in Tampa was that they hadn’t lost any of their hunger for this music” Chesney said. “If anything, they were more passionate than they were in 2018, 2015, or any of the years we’ve set records. This year’s audiences were something else, and it made being out there the greatest experience any of us have ever had on an entire tour.”

Chesney’s focus since becoming a stadium act in 2005 has been making affordable tickets available for fans.

Rome McMahon agreed.  “It’s important to Kenny to try and provide a price point for every fan,” he said. “There are more expensive tickets that have a VIP element to them, but there are also ‘Hey, I got my foot in the door’ type tickets and everything in between.”

“We have access to sophisticated tools now that allow for a quick assessment,” he said. “But what probably makes it different is that I can talk to Kenny directly. He’ll tell me exactly what he wants, so there’s no guesswork involved.”