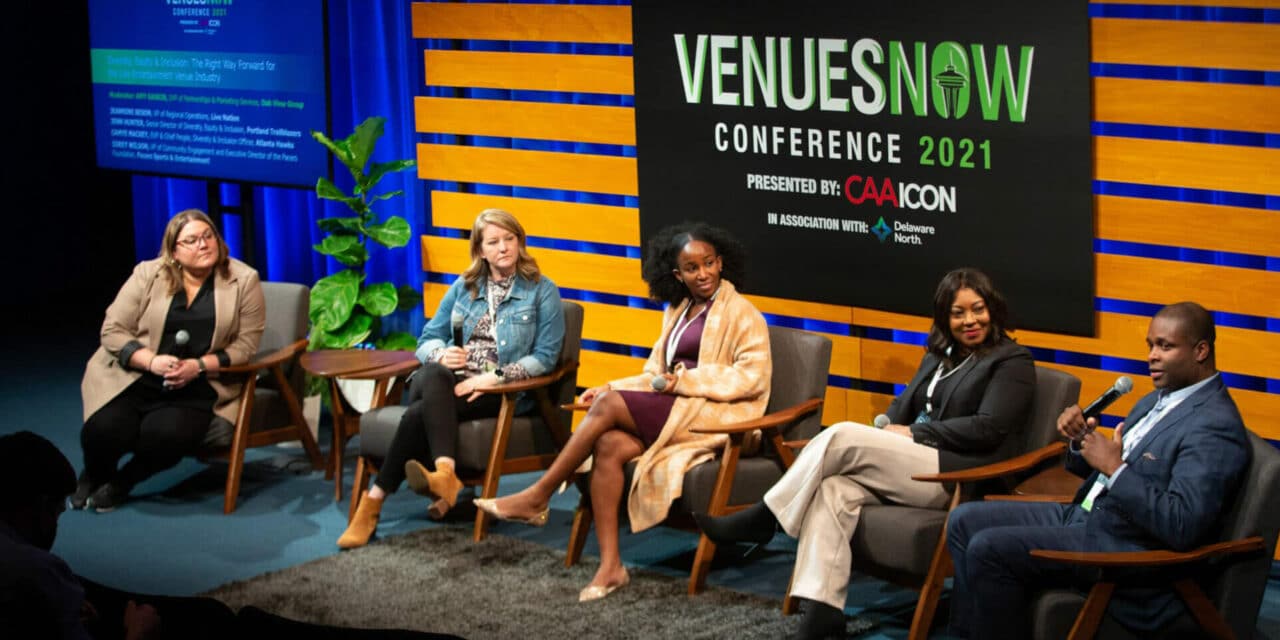 ‘If it’s not reporting … to the top, you’ve already created a barrier for what your DEI can do’

The American workforce continues to grapple with issues of diversity, equity and inclusion, and the venues, sports and live entertainment sectors are no different.

In an unflinchingly honest panel, executives from Oak View Group, Live Nation, and three basketball teams — the Portland Trail Blazers, Atlanta Hawks, and Indiana Pacers — gathered to discuss their experiences in the live industry, how their organizations are evolving with the times, and the work that remains ahead.

And the honesty began with VenuesNow Conference itself.

“When we go to conferences, we gravitate to comfort,” said Jenn Hunter, Portland Trail Blazers senior director of diversity, equity and inclusion. “You may see women with each other. You may see the white men with each other, you may see the black folks sitting at one table, and that’s OK, because that’s your comfort zone. But for the pipelines to really happen and for us to see that change internally, you have to challenge yourself to step out of that and to have those conversations with people that you’ve never had before.”

“Organizations in this room or across the industry are all at different stages: Some haven’t started and some are much further along,” noted moderator Amy Gaskin, Oak View Group senior vice president of partnership management.

Live Nation, the world’s largest promoter, has focused on diversifying both its performers and its staff, explained Jeannine Beson, vice president for the company’s Carolinas region.

“One of the things we are doing is investing in the artists and diversifying the artists that we have on the stage,” she said. “And it comes down to, at the venue level, that our staff top to bottom is diverse.”

The basic thrust of corporate diversity – to reduce the whiteness and maleness of companies by increasing numbers of minority employees – is well-established today. But a central theme of the panel was that diversity doesn’t begin and end with fairer hiring.

“The DEI role and function can’t be an ‘only lonely,'” said Corey Wilson, Pacers Sports and Entertainment vice president of community engagement. “What that means is it can’t be just one person trying to fight at the strategic level with the most senior person in the organization, the executive team, but then also dealing with the one-off conversations where someone comes into your office and wants to talk for 45 minutes about something that happened to them.”

The frequency of “only lonelies” in corporate structures drives burnout among DEI professionals, Hunter said, as do indirect channels of communication that distance such employees from the halls of power in their organizations.

“If it’s not reporting to the head, to the top, you’ve already created a barrier for what your DEI can do,” Hunter said. “DEI cannot roll up; it can only trickle down.”

Diverse practices extend well beyond offices and into facilities themselves.

“How can we really build a team out that can impact diversity, equity, and inclusion in every space?” Hunter said. “We have walked every aspect of our arena thinking about accessibility.”

The Pacers, meanwhile, have sought to diversify their concessionaires and suppliers.

“We’ve been able to accomplish developing a supplier diversity program,” Wilson said. “So, looking at the goods and services that we procure, ensuring that those are from diverse, minority small businesses.”

Wilson also emphasized the need to think of diversity as “a movement, not a moment” – in other words, for companies to stick with diversity initiatives they instituted after the May 2020 murder of George Floyd inspired many Americans to rethink issues of inclusivity.

Wilson and Camye Mackey, Atlanta Hawks executive vice president and chief people, diversity, and inclusion officer, highlighted the roles their organizations have played in local communities, and how company-wide diversity initiatives have bolstered such efforts.

The Atlanta Hawks opened State Farm Arena’s doors to voters in 2020, for instance, and the venue also has pumped tens of millions of dollars into local Black-owned banks.

“Our owners came out very strong when they took over our team to say that the Atlanta Hawks, State Farm Arena, will be a civic asset to our community,” said Mackey, noting that the team was the first professional sports franchise to have a chief diversity officer. “When you look at our community, it’s very diverse. We get involved in all aspects, and it’s expected.”

In Indiana, which Wilson reminded the audience is a red state and the home of Mike Pence, the Pacers team has made strides in its community.