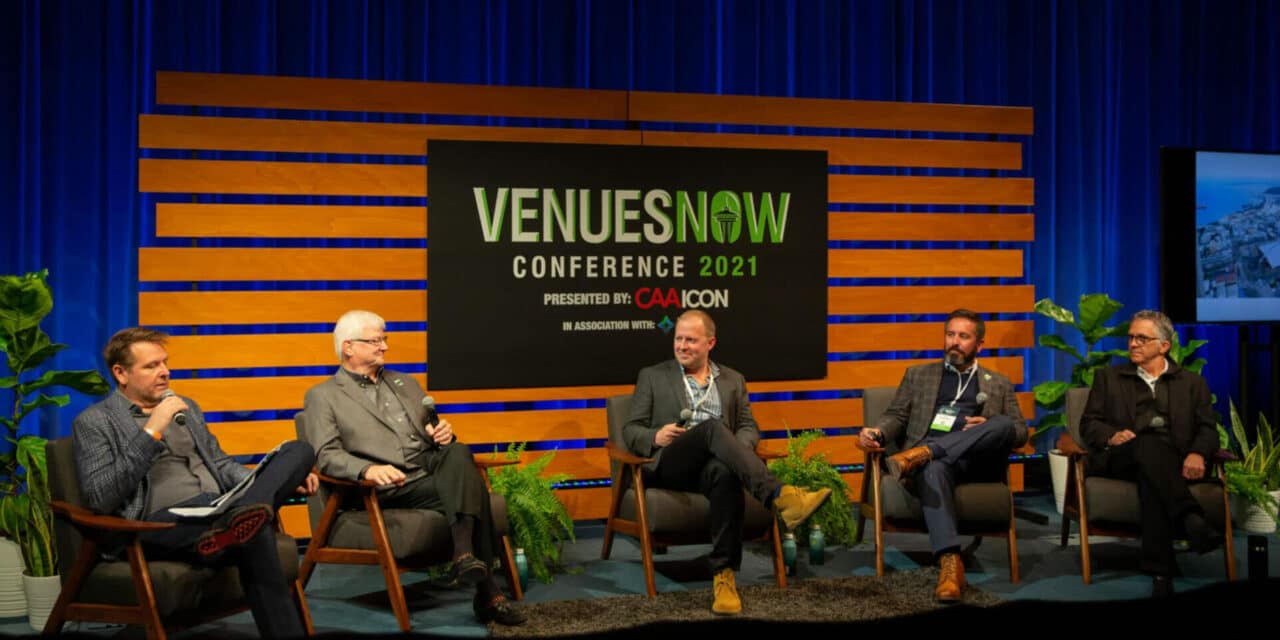 Four key executives in the development of Climate Pledge Arena — and, as HOK principal Scott Ralston described himself, one who has “nothing to do with Climate Pledge Arena” — gathered Thursday morning to discuss the renovation of the Seattle arena just a few minutes away and its implications for the venues business.

While the panel, titled “The Future of Sports & Live Entertainment Venue Design: Safety, Sustainability & Sanitization,” was ostensibly about the business at large, it focused predominantly on Climate Pledge Arena, if only because that facility was the most recent project for four of the five panelists and serves as an encapsulation of several cutting-edge industry advancements.

“When people asked me, ‘How was the job site?,’ I would describe it as terrifying,” said Rockwell Group senior director Craig Chowaniec, who worked on Climate Pledge Arena’s interior design. “Not because it was unsafe — it was never unsafe. But to participate in this work, you got the sense that you were a part of the magnitude of human achievement. It was like the space program.”

Throughout the project, the Climate Pledge Arena team was faced with unprecedented challenges requiring creative solutions, from the decision not to demolish the building’s iconic roof to the choice to make the building carbon-neutral to the unforeseen obstacle of finishing such an elaborate undertaking during a pandemic.

“The life of this project, in many ways, is a microcosm of everything that we went through as a country and as a world over the last two to three years, whether we talk about sanitization or sustainability or community, diversity, resiliency,” said Oak View Group chief operating office Stephen Collins, who moderated the panel.

“On paper, it’s easy to kind of make that stuff work,” said Populous senior principal Chris Carver, who signed on to the project in late 2016 and described a cavalcade of ambitious requests from Tim Leiweke, CEO of Oak View Group, the firm behind the arena’s renovation. “The hard part was actually figuring out how to engineer it at the end of the day.”

Among Carver’s chief challenges was the daunting logistical undertaking of maintaining the facility’s roof while drilling nearly 60 feet below street level.

“Ultimately, we had to get into tunneling technology, which you really never get into that kind of civil work on an arena project,” Carver said. “The whole first year of construction of this building was really just a civil engineering project: holding up the roof, building new foundations, cutting the old foundations off, holding up the old structure, and making sure that if there was a seismic event while we were under construction that it wouldn’t come down.”

And, Carver added, it seemed like “every time we [thought] we got one issue solved, four or five others kind of popped up on us.”

With the bowl of the arena excavated, ME Engineers senior principal Jeff Sawarynski and his team had to devise a way for natural air to cycle through the venue, as part of an advanced dehumidification system. They settled on a system of five giant “snorkels” to pipe in air from outside – which, as the nature of the coronavirus’ transmission clarified during the pandemic, took on increased importance.

Given the elaborate drilling and out-of-the-box ventilation, it’s no wonder that Chowaniec said, “We benefited greatly by having a bunch of smart people solve all the *really* difficult problems before we got involved.”

But, Chowaniec explained, his team still faced the challenge of designing unique gathering spaces within the arena that captured Seattle’s character, architecture of the Pacific Northwest, and a generally modern aesthetic. For his team, too, the coronavirus added additional layers of both difficulty and opportunity.

“I’m very optimistic about what architects and designers can offer the moment right now,” Chowaniec said. “Historically, architects are charged at these watershed moments, to find a way to sort of collect the ambitions or the goals of a culture and formulate a way to build a space that allows or promotes people to come together and share these common ideas.”

What does it all mean for the industry? All of the panelists lauded the tenacity of the parties involved in the project, especially concerning the green solutions required to pull it off, along with the substantial financial commitments of Oak View Group and Amazon.