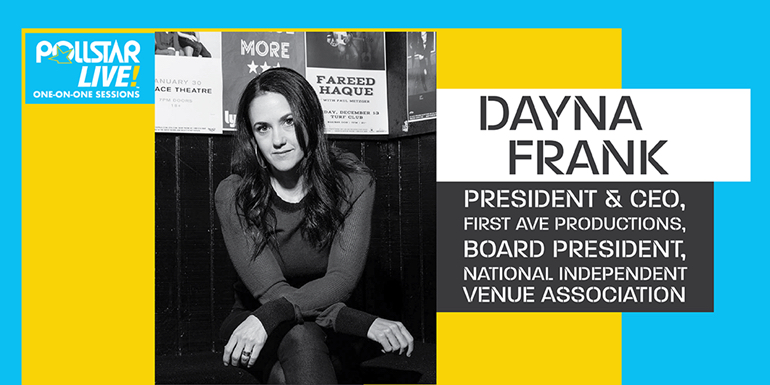 Dayna Frank, president and CEO of First Avenue Productions and board president of the new National Independent Venue Association, connected with Pollstar on Tuesday for the latest installment of the Pollstar Live! One-On-One Sessions.

In the wide-ranging interview, Frank discussed leading NIVA’s advocacy efforts during the coronavirus crisis, the unique challenges independent venues face, and what a post-coronavirus future might look like for the live industry.

“It was such a moment of solidarity,” Frank said of NIVA’s formation in March. “It was just so comforting to hear what other people were doing and that we weren’t just alone in Minneapolis going through this.”

During the coronavirus crisis, Frank has worked to educate lawmakers and fight for additional relief for the venues that provide critical economic benefits to their local communities.

“Our industry, we need a lot of help,” she said. “We’re entirely shut down. Our revenue is down 99%. You can’t do takeout. We’re selling T-shirts, thankfully, but our entire business is gone. We don’t need help for eight weeks. We need help for eight months plus.”

As she explained, that’s meant walking some politicians through basics of the live industry itself.

Nevertheless, Frank said, the reaction to NIVA has been “overwhelmingly” positive.

“The rooms and the people in NIVA are beloved community institutions,” she said. “Nobody wants to see Cain’s Ballroom in Oklahoma or Headliners in Louisville or the Troubadour or the Metro or 40 Watt Club [close].”

Frank would know: First Avenue, the iconic Minneapolis club that’s First Avenue Productions’ namesake, celebrated its 50th anniversary this year – as documented in a feature in the current issue of VenuesNow — and has remained a stalwart facet of the city’s cultural fabric that entire time.

“There’s nothing more special in the world than to have a business or a cultural center that is set up to serve first and foremost and almost exclusively the local community,” Frank said.