Commissioners on Venues: Figuring Out Technology, Finding the Right Capacity 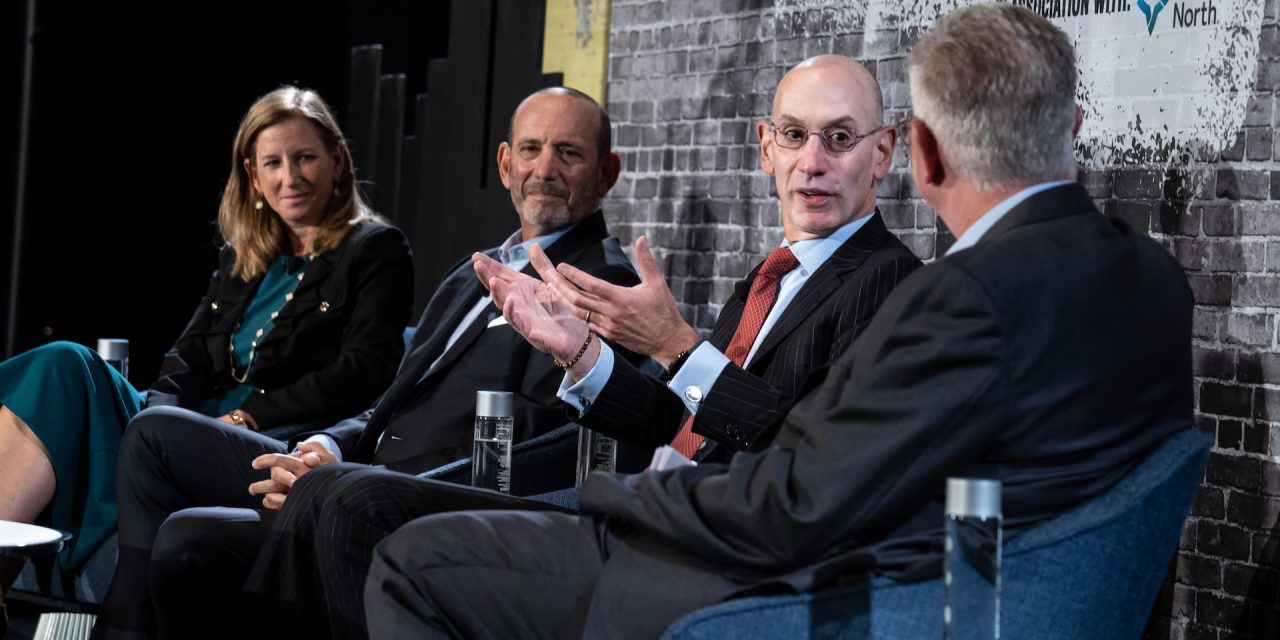 The WNBA’s Cathy Engelbert, MLS’ Don Garber and the NBA’s Adam Silver on the Sept. 10 commissioners panel with moderator Tod Leiweke at the VenuesNow Conference.

Three major league commissioners on a Sept. 10 panel at the VenuesNow Conference in New York City said evolving technology and shifting fan behavior continue to shape changes in their venues, including how big they should be.

“I think one of the great things about emerging businesses is we’ve got to have a firm, focused vision, but you’ve got to be little flexible in strategy,” said Don Garber, commissioner of Major League Soccer, which is in the midst of a stadium renaissance as it pushes toward 30 teams.

For Garber, who has run the league since 1999, the idea of moderately scaled soccer-specific stadiums across the MLS changed as some markets rang up big attendance numbers in football stadiums.

“It’s ironic that the Seattle team came (into the league in 2009) after we had already built a couple of stadiums. Seattle plays in a football stadium and to this day still averages 42,000 fans. And then we went on a massive build of soccer stadiums.

“And then all of a sudden Atlanta comes in, and Arthur Blank for 10 years was telling me, ‘We don’t need a (soccer-specific) stadium. Atlanta’s a great sports market.’”

Cathy Engelbert, the former CEO of Big Four firm Deloitte who began her tenure as the WNBA’s commissioner July 17, spoke of a similar question facing her league.

“We’re all over the place,” she said, having just finished a tour of her league’s 12 markets. “We’ve got big venues, small venues, including here in New York City, where you think, with the biggest city in the country, we have the smallest arena right now where the team is playing. We need to figure that out.”

“I don’t think there’s a one-size-fits-all (solution),” she said. “LA does great in the Staples Center, Minnesota’s in the Target Center, and then we have Washington, who just moved from a big 20,000 arena to a 4,000 arena.”

The league will add another NBA-size arena when the Seattle Storm move into the Seattle Center Arena, which is being completely rebuilt, in 2021.

In building for the future, NBA Commissioner Adam Silver returned to the idea of flexibility, especially when it comes to technology. “It goes without saying, but I sit in so many meetings where people act like they can predict the future, and they just can’t,” he said.

“I spend a lot of my time focused on technology, trying to understand it,” admitted Silver, who along with Garber was named to the inaugural class of VenuesNow All-Stars.

A good place for venues to start in becoming more tech-friendly is connectivity, he said. “One of the things that’s been much harder than people had predicted is, frankly, broadband, Wi-Fi in arenas. I know that’s been a real struggle – I can only imagine in stadiums as well,” Silver said.

It’s no small question. While some are concerned when fans in the seats are looking at their phones and not at the game, Silver said that getting a generation of digital natives to put down their devices is “virtually impossible. It’s just part and parcel of who they are.

“And so I think we have to find ways to incorporate that digital existence into our league and recognize that at the end of the day what these leagues have become are social platforms unto themselves.”

Though new to the sports commissioner game, Engelbert became, as moderator Tod Leiweke noted, a team captain in both basketball and lacrosse during her college days at Lehigh, even though she was a walk-on in basketball. He asked her whether the glass ceiling for female executives was real.

“A lot of people talk about you can’t be what you can’t see. If I had followed that, I wouldn’t be where I was at Deloitte as the first female CEO of one of Big Four professional accounting and consulting firms,” Engelbert said. Garber offered some advice to Engelbert from his own experience leaving the NFL after 16 years to become MLS commissioner. “I had an exit interview with (commissioner) Paul Tagliabue, and he said to me, ‘Don, you’re a young guy’ — I was 40 years old — ‘there’s one thing I’m going to tell you as advice for a commissioner: Your job is to keep the owners that hate you away from the ones that are undecided.’”

More From the Conference