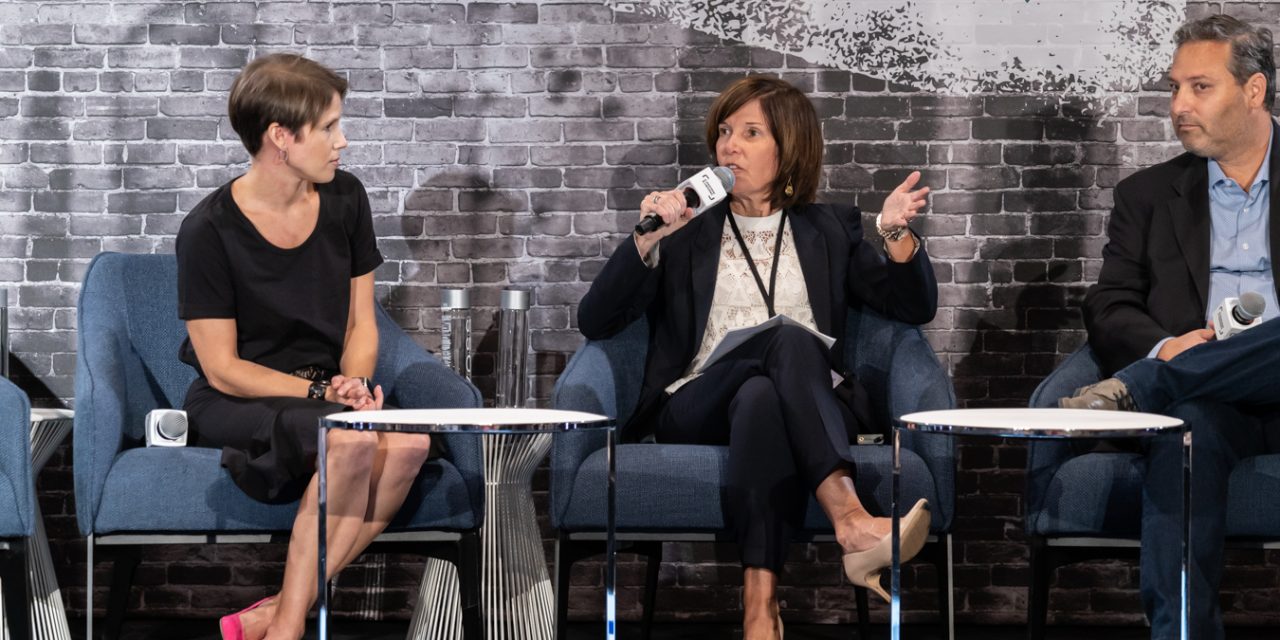 Nicole Feld, Melissa Hoffman and Sean Saadeh discussed immersive experiences on a panel at the VenuesNow Conference, on Sept. 11, in New York City.

The term “immersive experiences” is often misunderstood, according to Nicole Feld, executive vice president and producer for Feld Entertainment, a company that has 50 years of experience with shows that incorporate the audience into the action.

Feld spoke Wednesday, along with Melissa Hoffman, principal/studio leader for LAB at Rockwell, and Sean Saadeh, executive vice president of entertainment at Prudential Center in Newark, N.J., on a panel moderated by David Touhey, president of Monumental Sports & Entertainment, at the VenuesNow Conference in New York City.

“The definition of live entertainment is changing,” Feld said. “Immersive in the way we use it today is when we get the audience not only to participate but to actually be part of the show’s environment. What fans remember is not the trip to the venue or the hassle of parking. What they recall is the emotional reaction they had to the experience. Pulling them into the show is a powerful tool.”

Feld Entertainment’s “Trolls The Experience” has successfully incorporated the audience into the “troll village” of the production, and Feld is convinced that this level of audience participation is the future of live entertainment.

The company will replicate that experience in its new Jurassic World Live Tour by using a “Dyno Decoder” that when activated will allow the fans to test the strength of a dinosaur. Feld Entertainment’s new Disney on Ice show, “Mickey’s Search Party,” is built so that 50 fans a show get to be on stage with the characters.

Hoffman said that what’s really hot now is “taking the show off the stage. What we’re seeing is 360-degree shows, multisensory productions and other ways to bring the show into the venue and outside the venue.”

Whether an experience is small or big, or for 30 seconds or three hours, is unimportant, “as long as everything that we do is seen through the lens of hospitality.”

Saadeh described the immersive experience at Prudential Center’s Grammy Museum as their way to “get closer to our community with a brand that will elevate us.”

The Grammy Museum has permanent exhibits and also temporary special shows like the Whitney Houston memorabilia exhibit, a Taylor Swift display and a Woodstock tribute.

The temporary experiences give guests a reason to come back over and over again, he said.

“Our Grammy Museum shows are highly interactive,” Saadeh said. “Fans can get onstage, play guitar or drums or DJ.”

Prudential Center also holds special preshow events and mini-concerts in the space, such as when the Backstreet Boys played the venue and did a before-show performance in the Grammy Museum.

“The biggest perk of that experience was that those guests got a special lane into the concert and did not have to get reinspected,” he said.

Hoffman said that in today’s environment, it’s “evolve, change or die.” She suggested trying small low-cost installations as ways to dip your toe into the brave new world of involving the fans in ways venues have not thought about previously.

Saadeh agreed and advised that what he’s seeing is that the fans want “entertainment in their entertainment” and that the days of flat-stage experiences are waning.

“You can put small social exhibits on the concourse or in the parking lot,” he said. “You can also move food and beverage into areas outside the concourse.”

Feld suggested that every venue operator visit a theme park once a year for inspiration. “The parks make sure their guests are taken care of from the parking lot to the ticket process to the park itself and then until the guests leave the lots at the end of the day,” she said. “Venues need to replicate it.”

There are three steps to putting together an immersive experience, Saddeh said. “First, figure out your objectives and how to capture the experience. Second, find the right location. Third, hire smart people to run it.”

Installations should run for about three to four month max, agreed the panel.

“You always want to leave them wanting more,” Feld added.