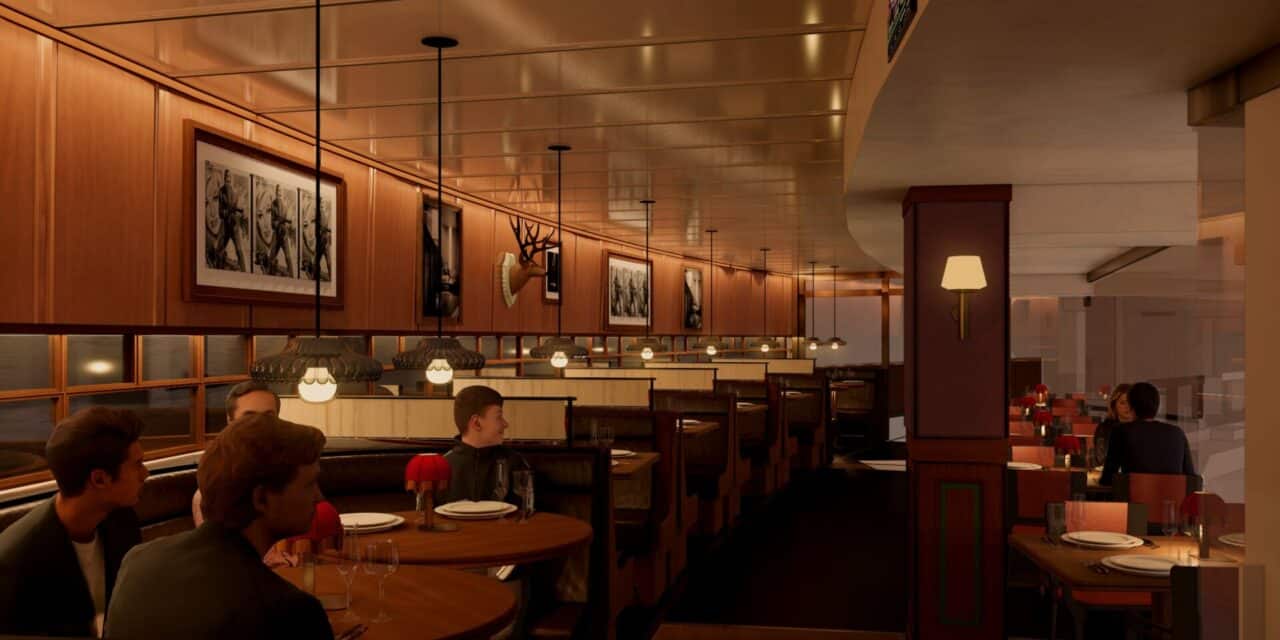 Aptly named Adrian (after the Talia Shire character in the film “Rocky”), the upscale urban tavern is part of a $50 million club level renovation scheduled to be completed this fall in time for the start of the NHL Philadelphia Flyers and NBA Philadelphia 76ers seasons. The 76ers recently announced plans to move to a new $1.3 billion downtown arena for the 2031-2032 season (See related story in VN Pulse).

At Wells Fargo Center, the new club level reflects the rich sports history of the city while showcasing the latest in technology and entertainment. The upgraded club level is part of multiyear, $350 million facelift, which started in 2016, privately funded by Comcast Spectacor. Interior improvements will be completed this year and exterior improvements will be complete by next summer.

Originally opened in 1996, the new Wells Fargo Center is a direct, private investment in the Stadium District and an anchor for the broader revitalization of South Philadelphia, including plans to refresh FDR Park, invest in local roads and infrastructure and redevelop underutilized areas.

Comcast Spectacor is paving the way to transform the area into a leading sports and entertainment district. Spectacor led the development of Xfinity Live and is actively working to build a new, mid-sized mixed-use venue and plaza adjacent to the Wells Fargo Center, according to the company.

Adrian is replacing The Grille as the Center’s sole sit-down restaurant, with a capacity of 300. Adrian will be open before games and for post-game refreshments. Offering a menu of American-style cuisine favorites, Adrian offers soups, salad, appetizers including crab cakes and French onion soup. Main course options include charred steaks, chops, sandwiches, burgers and sides. The carefully curated menu will include vegetarian and seafood selections including a raw bar, Scottish salmon, and whole roasted celery root and branzino.

“Every inch of the new Wells Fargo Center is designed to be world-class, and we’re incredibly proud to be the first venue in the world to offer a Starr Restaurant experience to our guests,” Camillo said via a press release. “Adrian is a perfect example of that – it will be a world-class restaurant with an unmistakable Philly feel.”

The restaurant, which will be operated by Aramark, will be open for all games and select shows and concerts.

Adrian is designed to meet the changing tastes of fans looking for an elevated dining experience, but the Wells Fargo Center and Aramark will still provide the full range of dining options including fan favorites, health-conscious items and local flavors including cheese steaks throughout the venue.

Ordering food and beverages at the 19,500-seat arena has been streamlined thanks to QR codes posted on seat armrests and throughout the building that allow fans to order their food and drinks directly from their phones.  Fans on the club level will also be able to have food and drinks delivered straight to their seats. All food and beverage purchases at Wells Fargo Center are also now cashless, which significantly reduces wait times so fans can catch more of the action.