What’s In A Name, Image and Likeness? 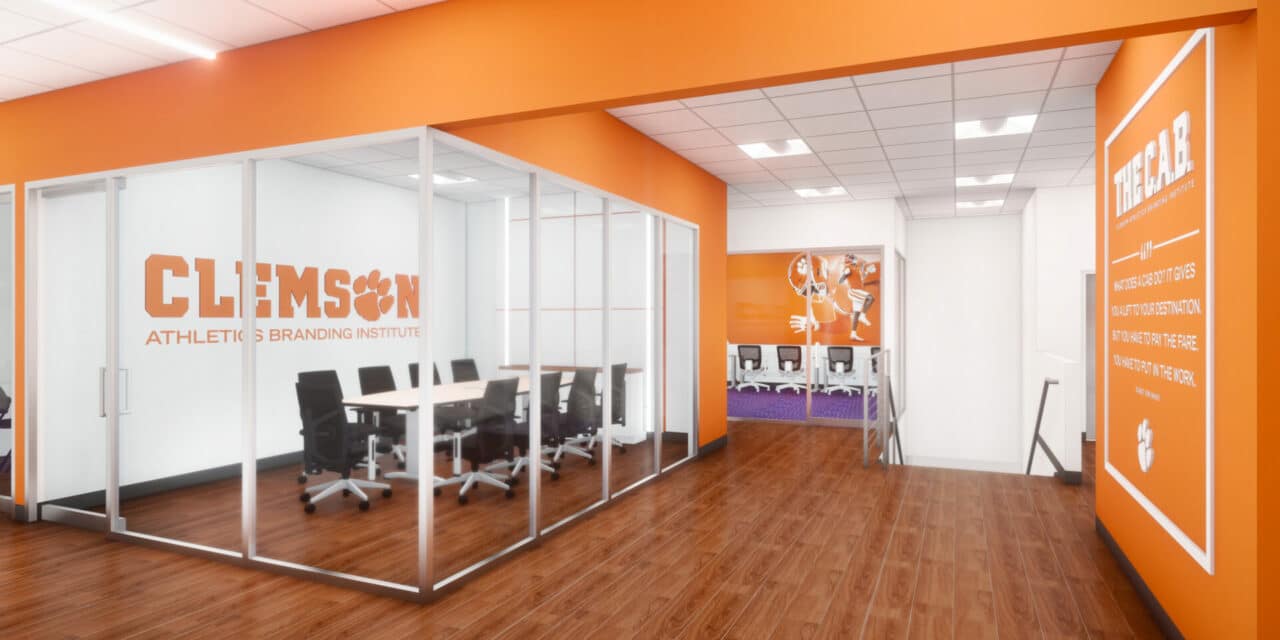 TIGER TALE: A rendering of the new Clemson Athletics Branding Institute shows some of the spaces dedicated to meet the NIL needs for student-athletes on campus. (Courtesy Eric Sabin)

College sports has undergone a radical shift under the NCAA’s new platform in which student-athletes are financially compensated when their name, image and likeness are used for marketing purposes. One year after NIL launched, the role that college stadiums, arenas and practice facilities fill to provide physical spaces dedicated for student-athletes to produce their own content remains unclear.

As it stands now, those deals are negotiated between student-athletes and commercial partners with no input from the institutions beyond connecting the two parties. Still, NIL legislation’s effect long term on facility development on campus is a hot topic of discussion among athletic directors and sports architects as they navigate the new landscape.

One thing is certain: As some of the biggest recruits and upperclassmen in men’s and women’s college sports sign NIL deals up to seven figures with corporate sponsors, they need spaces to create marketing collateral as part of these agreements, say athletics administrators and the designers they work with to keep their venues current.

“What it boils down to is the NCAA hasn’t been very clear in their guidance in terms of what institutions are going to be allowed to do in the NIL space, whether they can help create content or provide real assistance in negotiating these deals,” said Carey Hoyt, Ohio State’s senior associate athletic director for sport administration and student-athlete development.

“Until that comes out, which we hope is this fall, there’s not going to be a whole lot of clarity,” Hoyt said. “Right now, the NCAA is basically saying, ‘follow your state law.’ For Ohio State, we could build a whole NIL complex if we wanted to, but because the NCAA has not said one way or the other, nobody’s being very aggressive in that space.”

Clemson University is one exception. The ACC school is currently building the Clemson Athletics Branding Institute, encompassing 6,000-plus square feet of dedicated NIL space to include a conference room, video and photo studios, a soundstage and office space.

The $4.5 million branding institute, attached to Clemson’s indoor football facility, is set to open in November. The second floor expansion will be accessible to all 400 student-athletes, said Eric Sabin, senior associate athletic director for facilities management and capital projects.

In addition, Clemson plans to construct a second branding institute at the Jervey Athletic Center, an existing building where student-athletes across 19 sports visit daily for strength and conditioning, sports medicine and academics.

The athletic center, also home to Clemson’s ACC Network studios, is more centrally located on campus than the football practice facility. NIL amenities will be similar to the initial facility, although the project cost for the second venue has not been determined, Sabin said. Local firm Goodwin Mills Cawood designed both spaces.

Clemson officials are keeping a close eye on pending NCAA regulations tied to NIL and how it could affect their projects. Should there be further restrictions prohibiting schools from providing new spaces for producing NIL-related content, both branding institutes will have flexibility for other activities.

“We have an overall need for studio space regardless of NIL,” Sabin said. “We’re trying to be proactive about the facility spaces we have and that we will need in the future, for recruiting purposes, team photo shoots, things like that. We don’t like to design a space that isn’t going to be used.”

In the early stages of NIL, architects have been quietly busy designing those spaces as part of facility upgrades. Some are retrofits of existing areas, whether it’s a training center or add-ons to the recruiting lounges at stadiums trending over the past decade.

Depending on the project and whether it’s a new build or renovation, costs can be kept in line, HOK designers said.

“From a priority standpoint, it’s definitely climbed the ladder,” said Nate Appleman, HOK’s vice president of sports, recreation and entertainment. “If the school has $60 million to spend, that doesn’t mean they’re going to spend $62 million because they have an NIL suite. It just means it’s a higher priority than maybe adding more weight room space.”

For the architects, these new NIL spaces have become another box to check among the typical programming requirements, said Trevor Bechtold, director of HOK’s sports, recreation and entertainment.

“I liken it to esports a little bit, where it was something a little bit mysterious at first,” Bechtold said. “Nobody really knew a whole lot about it. Now, there’s new buildings for it and a lot of schools are recreating space with what they already have.” 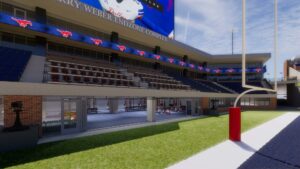 FORD BRAND: The new end zone addition at SMU’s Gerald J. Ford Stadium, designed by HOK, will include an NIL suite as part of the three-story training, strength and conditioning complex. (smumustangs.com)

As part of the new Garry Weber Training Complex at Southern Methodist University’s Gerald J. Ford Stadium, HOK is designing an NIL suite. Bechtold said it will be wired for student-athletes to conduct podcasts with green screens for photo shoots, plus space for post game discussions.

Overall, the south end zone expansion, a three-story building spanning 165,000 square feet, is a $100 million project. It’s scheduled to open for the 2024 college football season on the Dallas, Texas campus.

“We’re going to see more of this specialized type of space that relates to NIL,” Bechtold said. “A lot of these kids can do it on their phone, limping along with their own assets, but to have physical space as the core network is powerful for a lot of these institutions.” 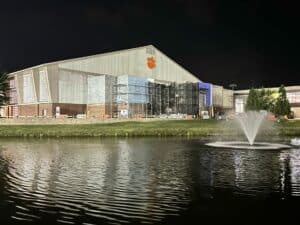 Social media drives much of the content connected with NIL packages as student-athletes stay connected with thousands of followers on those channels. In that respect, the audio-visual components are a critical piece of NIL spaces to produce podcasts and TV ads.

“Those spaces don’t exist in very many places,” said Don Barnum, principal and global sports sector leader for DLR Group. “It also adds emphasis to the things we talk about a lot, because as you move throughout a building, you want to reinforce the brand and messaging for what they’re trying to accomplish. They can become the backdrop for all social media content. It doesn’t have to be artificially created in a studio, it can be created live in a space as well.”

Bechtold agreed. The NIL piece may have some dedicated space, but in general, the overall platform has brought a new level of exposure for student-athletes and their daily routines that they’ve never had before, he said.

“These guys may be shooting from the training room when they’re in there, sharing their story as they move through these facilities,” Bechtold said. “Everything that we (design) will remain relevant.”

Designing office space within NIL suites is another element to accommodate athletic administrators such as Ohio State’s Hoyt. She has a small staff to help facilitate NIL deals, and their duties could grow pending the NCAA’s ruling.

Hoyt has been at Ohio State for 18 years, including 13 years as head women’s gymnastics coach before moving to the administrative side in 2017. Her role expanded in June to oversee all potential NIL deals flowing through her department on a daily basis. The group serves as a clearinghouse of sorts to find the best fit between student-athletes and commercial brands and educate potential partners on both sides of the table on NIL, she said.

“The hard part is when you start using the Ohio State logo; a lot more people have to get involved,” Hoyt said. “That’s where we’re making sure there’s no conflicts with Nike or Coke or any of those things.”

HNTB, which has designed renovations for half of the football stadiums in the Big Ten Conference, including Ohio Stadium in Columbus, is developing some NIL suites in that league, although officials with the firm would not name the schools because the projects have not been made public.

In general, though, schools see these NIL spaces as a “great differentiator” for recruiting apart from the cash involved, said Vito Privatera, a senior designer with HNTB.

“So much of our discussions any more is about wellness for student-athletes and this is just another component of it,” Privatera said. “They have the opportunity to (activate NIL) on their own, and the schools are providing resources for them to feel like the university that’s recruiting them is more than just athletics — ‘they’re helping me be the best I can be,’ whatever sport it may be.”

It’s something the University of South Florida plans to sort out as the school develops a new football stadium on campus expected to open in 2026 (see related story, page 28).There could potentially be an NIL suite folded into the stadium development, said Athletic Director Michael Kelly.

“We just finished a control room in our Luma basketball practice facility that we might expand to include a different studio for NIL or we could put it in the stadium itself,” Kelly said. “To prepare for the future, we’ll be taking that into account.”