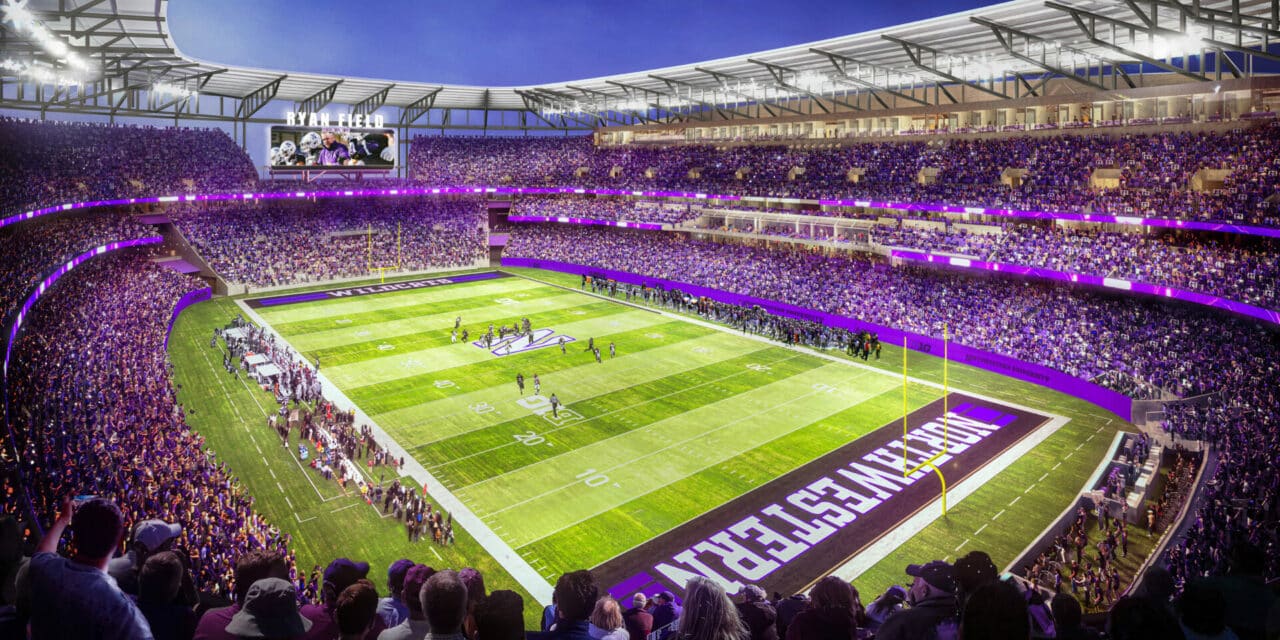 Northwestern University’s rebuild of Ryan Field into a stadium with much smaller capacity is a massive project and extends to logistical challenges for relocating the Big Ten school’s football team for two years during construction.

Last week, officials with the Big Ten school released initial renderings of a building downsized to 35,000 seats with a roof canopy and plenty of plaza space outside the facility for students, staff, alumni and the community to enjoy year-round, given the northern climate in Evanston, Illinois, a Chicago suburb.

“The initial intent was to just renovate and improve the current conditions at Ryan Field,” said Denee Barracato, Northwestern’s deputy director of athletics for operations and capital projects. “The last renovation it had was back in 1997. We’re just excited that the Ryan family saw that and wanted to invest in a way that would allow us to re-envision what the new Ryan Field would be.”

In September 2021, the family of Patrick and Shirley Ryan, Northwestern alumni and donors, provided a $480 million gift to help fund construction, which it turns out, takes up a little more than half of the estimated $800 million budget.

Barracato confirmed the number first reported by Crain’s Chicago Business, which covers hard construction costs and soft costs such as design fees, permitting costs and fixtures, furniture and equipment. Some industry experts feel that number is too high for a project they say should cost between $560 million and $650 million all-in, which reflects current Chicago market conditions and escalation costs tied to inflation.

Barton Malow, competing with Turner Construction to build the new stadium, came up with the $800 million estimate in tandem with Power Construction, a Chicago firm, sources said. Power Construction built the NU Ryan Center for the Musical Arts and the NU Kellogg Global Hub on campus. The stadium design encompasses an expensive exterior and roof canopy, with the Ryan family as the lead donor driving the development. The family is expected to expand their gift to help fill the gap on the investment, sources said.

“We’ve got a great team of pre-construction advisors looking at the volatility of the market and adjusting as we go along,” Barracato said. “During COVID, everything has extended beyond what anyone can imagine. Right now, ($800 million) is what we’re targeting, but you never know with the market and all the all things we want to do with the stadium.”

HNTB and Perkins & Will have teamed up to design the stadium. HNTB previously designed renovations for seven of the 14 Big Ten schools. Perkins & Will collaborated with HOK to design Ryan Fieldhouse, Northwestern’s $270 million indoor football practice facility that opened in 2018.

CAA Icon is the project manager and Legends was hired to market the stadium, Barracato said.

Northwestern expects to select a general contractor over the few weeks and start the teardown of Ryan Field after the 2023 season with completion before the 2026 college football season.

The private school is researching options for Wildcats football to play the 2024 and 2025 seasons on the road, whether it’s in metropolitan Chicago or outside the local footprint, Barracato said. In the past, Northwestern has played single games at Soldier Field and Wrigley Field. The key is finding a temporary home that works best for transporting students to the game and fits the needs of the school’s game operations staff, she said.

“Each venue has its own unique configurations and challenges,” she said. “Nothing is off the table.”

The new stadium’s 35,000 seats would be about 12,000 fewer than the current stadium, which fits with the industry trend to facilities with smaller capacity,  Barracato said.

As it stands now, Northwestern struggles to fill the current 47,000 seats on its own with fans from Nebraska, Iowa, Wisconsin, Ohio State and Michigan often outnumbering the home team crowd.

A signature design element of the new stadium development is the roof canopy, designed to protect every seat in the building. The intent is to provide an intimidating environment for opponents by keeping the crowd noise intact. In that respect, Barracato said the canopy also serves the residential neighborhood where the current stadium sits by keeping a lid of sorts on the noise, sound and lights emanating from the seating bowl.

As part of its research on canopy structures, Northwestern looked closely at the partial roof cover at Baylor’s McLane Stadium and Lower.com Field, an MLS stadium in Columbus, Ohio designed by HNTB.

On the sustainability front, project officials hope to achieve LEED Gold certification for the new stadium. Part of that program is dealing with water table issues for construction situated a few blocks east of Lake Michigan, Barracato said. It’s similar to the makeover of Wrigley Field, also close to the lake, which encountered obstacles with excavation and the removal of 12,000 tons of beach sand at the century-old ballpark. In Evanston, Ryan Field is 96 years old.

“Once we go into the ground, we could find different things that we weren’t anticipating,” she said. “We’ve done a good job of helping identify a contingency budget that we can aside for things that we just don’t know.”

Multiple plaza spaces are part of the blueprints to accommodate students, alumni and faculty on game days and local resident in the neighborhood surrounding Ryan Field that could congregate on non game days.

“We’re going to find one way or another to make sure that Mustard’s is still standing,” Barracato said. “We want to maintain that relationship and everyone is talking about it.”