Wilson’s World Was One of Kindness, Love of Live Entertainment 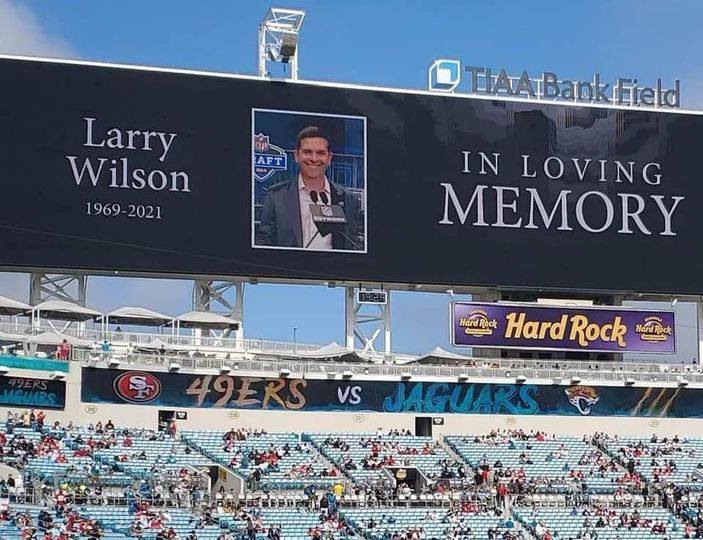 Larry Wilson, a veteran facility manager who spent 23 years at the old SMG before landing his ultimate job working in the NFL for the Jacksonville Jaguars, died Nov. 15 in Destin, Florida.

He was 52. No cause of death was disclosed.

Wilson’s colleagues described him as an upbeat person who preached kindness to his employees, as well as his superiors. Wilson loved the industry, they said. He learned things quickly on the job and had a natural ability to establish connections with agents and promoters, which was critical for securing shows.

As a result, running and booking sports and entertainment facilities became a perfect fit for him and it showed through the lasting relationships he formed worldwide, said Amy Frank, his former fiancée.

“All the people who worked for him always respected him and loved having him as a boss,” Frank said.

“Quite simply, Larry was one of the true good guys, even in times of conflict,” said Chad Johnson, the Jaguars’ senior vice president of sales and service. “He had a lot of energy and loved live events. He thrived being in that environment.”

Wilson got his start in the business in an unofficial capacity at the old Pyramid in Memphis. He hung around the arena because he was good friends with Rick Fredette, an event coordinator there and who is now with the Broward County Convention Center in Florida, said Tom Williams, a partner at Venue Solutions Group, a Nashville consulting firm.

At the time, Williams served as an intern at the Pyramid, and he got Wilson to help him run the SEC men’s basketball tournament in 1994. Wilson was a student at Memphis State. He did all the menial tasks that Williams couldn’t get to in his role as tournament coordinator.

“It was unpaid,” Williams said. “He was willing to work the crazy long hours from 6 a.m. to midnight, four nights in a row.”

Over the next several years, Williams and Wilson worked together at two venues, starting with the Palm Springs Convention Center in California in the mid-1990s. Leisure Management International ran it before merging with SMG in 2000. It was Wilson’s first full-time job.

They later teamed up at CenturyTel Center in Bossier City, Louisiana when that building opened in 2000. Wilson was assistant general manager and Williams was director of operations.

Wilson’s career path took him to other arenas in Nashville, Richmond and Charlottesville, where he opened the University of Virginia’s John Paul Jones Arena in 2006.

In Jacksonville, for about three years, he oversaw the operations of six venues in that Florida city, including TIAA Bank Field, where the Jaguars play.

In 2013, SMG promoted Wilson to regional vice president, a position he held for 4.5 years before joining the Jaguars as vice president of facility operations.

“The opportunity to work in the NFL with the Jaguars was his dream job,” Frank said.

Wilson flourished in that position, helping the Jaguars open Daily’s Place amphitheater in 2017. The  6,000-capacity outdoor venue next to the stadium doubles as the team’s practice facility.

“It was well before Jacksonville was really on the map in terms of stadium opportunities,” Johnson said. “After its success and with our ability to execute live events, we were able to turn our sights to stadium content.”

Wilson was instrumental in booking stadium shows with Lynyrd Skynyrd and The Rolling Stones, along with the multi-act Hella Mega tour, headlined by Green Day. That particular concert took place this summer after being postponed from 2020 due to the pandemic.

As a facility operator, Wilson became Johnson’s partner on that side as well.

“Larry played a vital role here in Jacksonville,” Johnson said. “He loved the artist experience as much as the fan experience and took a lot of pride in making sure they were both first class. His favorite line was ‘be kind’ and that went a long way for our staff and a long way with me.”

Over the past six months, Wilson had taken on a new position as president of Ignite Sports and Entertainment in Columbus, Georgia. The company owns a few minor league sports teams and hired Wilson to help it expand into booking concerts at a 5,000-seat ballpark.

“It’s a great loss for our industry,” Williams said. “He was really excited about his new job at Ignite Sports. He was perfect for that role. They rebranded and wanted to do more than sports. With his connections, he would’ve been a great person to get that aspect of the business going.”

Don Rankin, board director at Pritchard Sports and Entertainment, a provider of janitorial, cleaning and flooring services, got to know Wilson well through their business relationships, starting in Nashville in the 1990s.

Wilson was a smart person, but like most others starting out in the business, he didn’t know half of what he thought he knew, said Rankin, who spent nine years as president of the old Harry M. Stevens concessions firm.

“I sat him down and told him, God gave you two ears and a mouth for one reason, start using them and he did,” Rankin said. “He told me many times it was some of the best advice he ever got.”

Over the years, they stayed close friends. “Larry’s a guy that lived his life his way,” Rankin said. “He adored his two sons and that part of his family was the most important thing to him.”

Wilson’s career left a strong impact on Jack and Trace Wilson, both of whom followed him into the sports and entertainment biz.

Trace, the oldest, worked for RMC Events in Richmond, a crowd management firm before he got laid off during the pandemic. He’s an author of a series of children’s books written to help kids with disabilities.

Jack is the health and fitness coordinator for the NBA Memphis Grizzlies.

Last Sunday, the Jaguars honored Wilson at TIAA Bank Field. They displayed a memorium on an end zone videoboard prior to the team’s game against San Francisco.

“Larry was an important member of our family and it was important to honor him appropriately and there was no better way to do it than in front of a live audience which he loved so much,” Johnson said.