Wining And Dining At The Hollywood Bowl 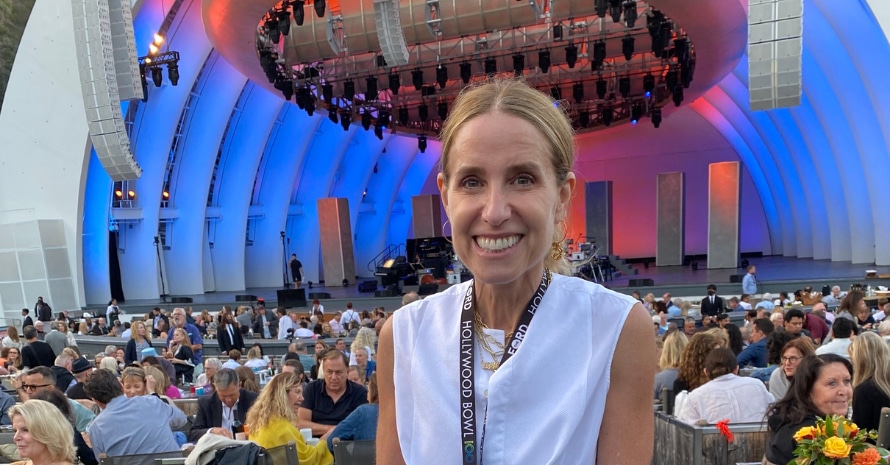 A OK: Caroline Styne, wine director for the Lucques Group and for Hollywood Bowl Food + Wine, has partnered with Sodexo Live! at the venue since 2016. Lucques Group includes the a.o.c. restaurants and Larder Baking Company. (James Zoltak/Staff)

LOS ANGELES  — It’s been six years since Sodexo Live! and Lucques Group took over the food and beverage operation at the Hollywood Bowl.

With Lucques, Sodexo Live! is partnered with Los Angeles restaurateurs Suzanne Goin and Caroline Styne, whose establishments include the a.o.c. restaurants and Larder Baking Company.

See: 100 Years Of Music For Everyone (Hollywood Bowl cover story)

According to Sodexo, the per caps were on the rise going into the pandemic. This year’s season is the first full one for the Bowl since 2019.

Guests at the bowl have three sit-down restaurants from which to choose, but many elect to dine on pre-ordered meals at their seats, choosing from items like sushi rolls or a Moroccan feast of hummus, vegetables, chicken and couscous, and can still bring in their own items, including bottles of wine to shows promoted by the Los Angeles Philharmonic Association, which manages the Bowl on behalf of Los Angeles County.

A variety of three-course box meals are also available.

The Food + Wine “Supper in Your Seat” menu is reset several times mid-season, depending on what produce and other items are ideal at a given time.

“You can come and have a fine dining experience at the Backyard restaurant or at (a.o.c.-inspired) Ann’s Wine Bar (named for a major Bowl donor), but they have in their marketplaces charcuterie and really interesting wine choices and sandwiches and salads which are kind of a notch above what you would usually expect at a venue,” said Laura Connelly, the LA Philharmonic’s general manager at the Bowl. “Those things are curated by Caroline and Suzanne, so even though you can bring in your picnic and your own wine on a lot of the events you can also have this added element of really good food that you can buy on site that I think makes a huge difference in the experience of coming to the Hollywood Bowl.”

At least one performer wasn’t thrilled with people having dinner while in the seats closest to the stage, according to long-time Bowl promoters Bill Silva and Andrew Hewitt, now a part of Live Nation.

Paul Simon vowed to never play there again, complaining that he doesn’t do “supper theater” after an early 1990s show. He actually played the Bowl numerous times since, both solo and with Art Garfunkel, and once asked why no one was eating in the Pool Circle, as the exclusive area is called.

“We took it out because of you,” Silva said they told the legendary musician. “We listened.”

LA Orchestra-promoted shows still include meals in that 140-seat section, which is now called “Lucques at the Circle.”

“More than the financials per se, it’s about creating the experience and the Food + Wine (program) and that partnership is a really important part of it,” Connelly said

VenuesNow: How did your (and Suzanne’s) involvement with Sodexo Live! and the Hollywood Bowl FOOD + Wine program come about?

CAROLINE STYNE: The Bowl was ready for a change and an RFP went out and Sodexo approached us and said we really want to partner with people who are locals and are respected in the community and we were referred to you by everyone we spoke to. We feel a deep connection to Hollywood and the Hollywood Bowl. It just felt very right.

The only way we agreed to do it was if we could do things our way and use the vendors and local farmers we use in our own restaurants and keep everything to a level that we would be proud of. We’re not the type of people to say, ‘Oh, you can just put our names over it.’ We’re control freaks. They agreed wholeheartedly to go with us.

Did the LA Philharmonic give you marching orders? What was that process like?

They actually were very open to what we wanted to do. There were no marching orders, like you have to do this or that. It was more, what would you do here? We definitely want it to feel like you are having restaurant-quality food. And it is restaurant quality. We didn’t want it to feel dumbed down or cheapened in any way. We want the venue to be as special as it could possibly be and by living the full dream of the food it allows it to be that way 100%. Why have an incredible concert and not be eating incredible food?

But it seems you don’t have to be a high roller to enjoy a pretty fancy experience.

If we did get one marching order it was from the LA Philharmonic board of directors who said we want the food at the top of the hill for the least expensive seats to be as good as the food down below. They want it to feel like it’s a place for everyone. We don’t personally prepare all of the concession food, but we’ve consulted on a great deal of it. The tacos are Suzanne’s and produced the way we would do them. Many of the items in Kitchen 22, which is sort of the spot for burgers and fried chicken, falafel, those are Suzanne’s recipes too. We wanted the hot dogs to be as good as possible and for everyone to have something fabulous to eat no matter what the price range.

Is there strong participation in Supper at Your Seat among patrons?

We get quite a few pre-orders and we’d love to get even more. Sometimes it’s a matter of letting people know they can do this. People who are not season ticket holders just don’t know these things are available to them.

Are you involved with any other venues or would you consider going into others?