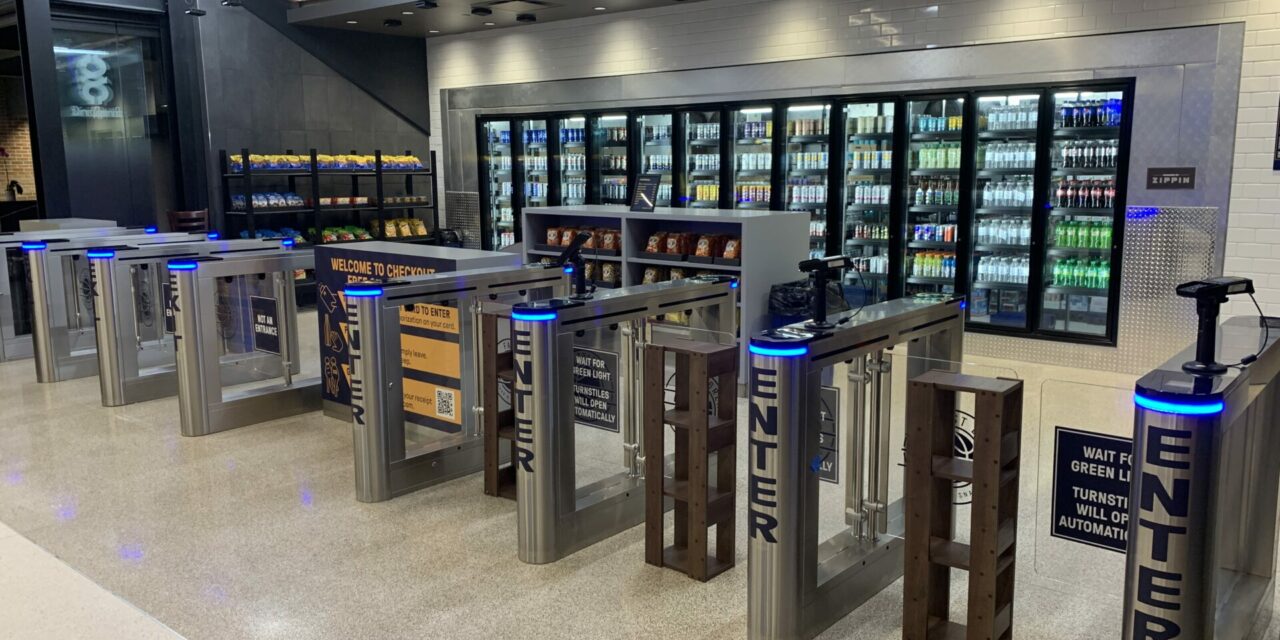 INDIANAPOLIS — Gainbridge Fieldhouse has a little more Zippin in its step after the NBA arena underwent $360 million in renovations.

Zippin, one technology vendor specializing in check-out free concessions, has its system in place at four grab and go markets inside the Indiana Pacers’ venue, split equally on the main concourse and balcony level.

The first two locations were installed last season. The biggest market, situated on the main concourse, produced the highest sales of any concession stand in the arena, said Mel Raines, president and chief operating officer of Pacers Sports & Entertainment, the facility operator.

Customers access the market by tapping the mobile pay function on their smartphone or by inserting a credit card at the gate reader. They pick up their food and drink items, which are scanned by overhead cameras and walk out without having to check out at a register.

The Pacers went with Zippin after the company submitted the lowest bid as part of a public proposal process, Raines said. The company now has its system in place at eight NBA arenas.

At Gainbridge Fieldhouse last season, the average transaction time was 45 seconds at the “Fast Break” markets, with speed of service and convenience driving sales.

The markets carry drinks and a few snacks. The technology has worked “amazingly well,” Raines said.

There are instructions posted on a sign at the market entrances for how to access it, but there’s still a learning curve for arena patrons, mostly for concerts, which draw a different crowd compared with an NBA game.

“Season-ticket holders figure it out; they’ll be back 20 to 30 times over the course of the year,” Raines said. 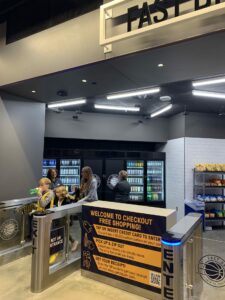 In another move to grow concessions revenue and as part of arena renovations, the Pacers installed Internet Protocol Television technology to better facilitate dynamic pricing of food and drink. Levy runs the arena’s food service.

The business model is similar to dynamic pricing for tickets, in which the cost to buy single-game tickets for NBA games goes up and down depending on the opponent and day of the week, among other factors.

The program for food and drink has been in place over the past five years, Raines said. For teams and concessionaires, the advent of digital menu boards and IPTV platforms over the past 15 years has made it easier to implement dynamic pricing.

“It’s great to push content and menu changes,” Raines said. “The Lizzo show (on Oct. 18) had a different price point than the Pacers game (the next night). Before the renovation, someone was walking around with a thumb drive to every menu screen. Now, we push out pricing to the stands from one place, which is so much easier.”

Levy and the Pacers work together to determine concessions pricing per event. The dynamic piece is mostly used for soda and beer. A Monday night Pacers game, for example, will feature reduced prices, especially on alcohol, compared with a Friday night concert when the price of beer may go up for a rock or country show.

The price difference is a slight one, 50 cents to $1 per item for the most part, Raines said.

“It’s not dramatic, but it makes sense,” she said. “We look at events and how we rank the games with our sales and marketing team and look at how other events have sold.”

More than likely, other teams implement dynamic pricing for concessions, but you don’t hear about it much. The Pacers have discussed their program at NBA league meetings and conferences, Raines said. On the consumer side, arena patrons don’t really recognize the price difference. Raines said the Pacers have received no feedback from fans either way on the program.

The concept has become more common in the industry, said food consultant Mike Plutino. In general, increased costs for the team and facility to produce events drives the need to find additional sources of revenue and dynamic pricing of food and drink is one way to do it, Plutino said.

“In many cases, it can be the difference of a show being profitable,” he said.