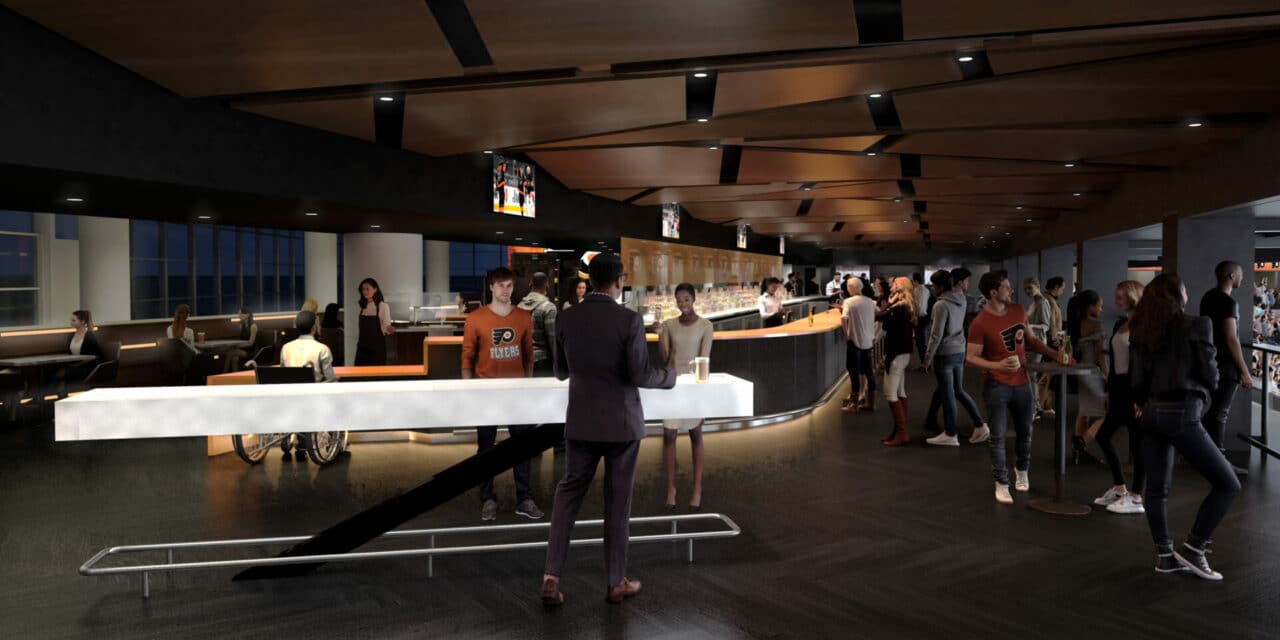 CONVERTIBLE: Drink tables at Wells Fargo Center’s club level switch from ice to hardwood depending on whether the Flyers or 76ers are playing that night. (Courtesy venue)

Wells Fargo Center is the newest 1990s-era big league arena to go through a transformation. Six years after the first phase of renovations started, Comcast Spectacor is wrapping up a $50 million makeover of the club level in advance of the 2022-23 NBA and NHL seasons.

To date, the company, which owns the Philadelphia arena and the Flyers, has invested $350 million to revitalize a building that opened in 1996. Virtually every space in the venue has been upgraded, designed by SCI Architects, which is part of Toronto-based Brisbin Brook Beynon.

The club level has been reconfigured to an open layout with new premium seat options and four new bars along the east and west sidelines.

A cool high-tech feature in the Changeover Bars are drink tables that switch from an icy surface to hardwood depending on whether the Flyers or 76ers are playing that night.

In addition, life-size holograms of the teams’ stars and touring artists will greet premium patrons in those bars.

The new seating products include loge boxes with heated seats and charging stations for mobile devices.

Vetri is widely known in the region for his pizzas and the MVP Pizza stand also offers calzones and desserts. Garces is attached to Garces Eats, specializing in burgers and burritos. Starr is involved in Adrian, a new 300-seat full-service restaurant, named after Talia Shire’s character in the “Rocky” movie series. The menu includes steaks, a raw bar and dessert items.

Aramark, the arena’s concessionaire, will run those three new eateries.

The overall renovation project is scheduled for completion in the fall of 2023 after a 16-month delay due to the pandemic.