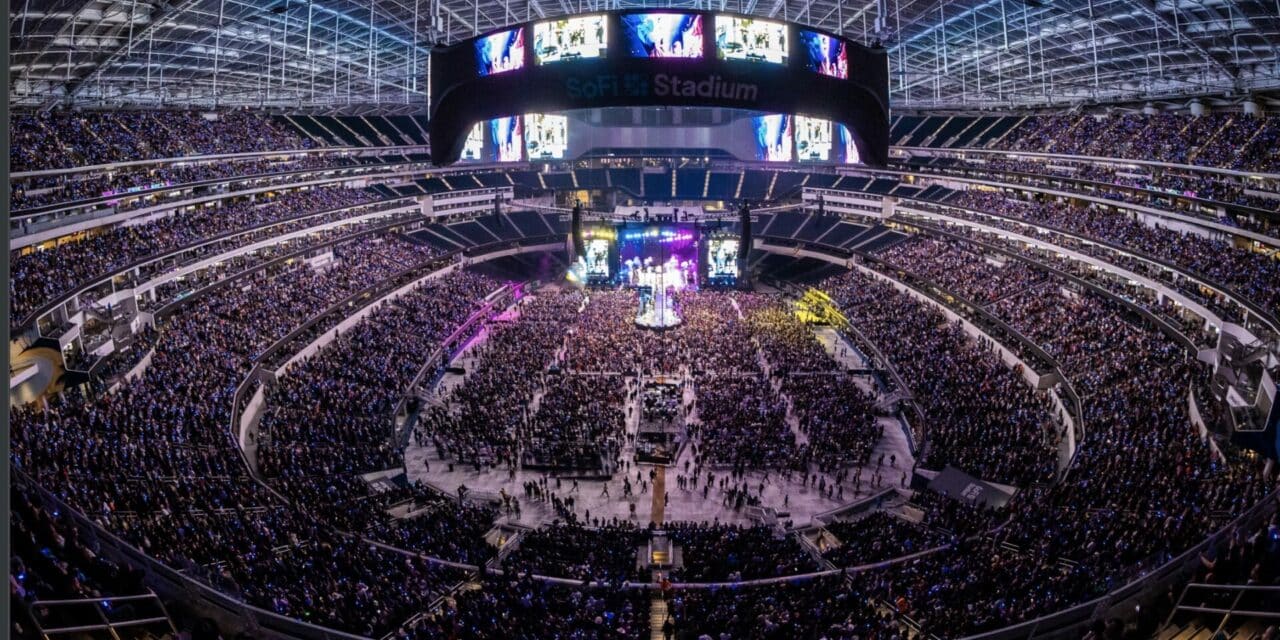 The world-class metropolis that is Los Angeles finally got the best-in-class stadium it long deserved. In the fifteen months since it opened to the public in July 2021, SoFi Stadium’s impact on Southern California has been profound, surpassing all expectations while creating a best practices handbook for stadium operations.

The privately financed $5 billion building, spearheaded by Los Angeles Rams owner Stan Kroenke, facilitated not one, but two NFL franchises relocating to Los Angeles, after not having a team for 20 years.

That the Rams won a Super Bowl in the building’s first year hosting the most watched U.S. sporting event seems more like a farfetched Tinseltown film treatment than an executable business plan. Equally impressive in its first year was landing the College Football Playoff National Championship set for January 2023 as well as 2026 FIFA World Cup matches and co-hosting duties for the 2028 Olympics opening ceremony.

“It was always Stan Kroenke’s vision to build a global sports and entertainment destination with a very local feel able to attract a variety of events, music genres and fans from around the world,” said Christy Castillo Butcher, senior vice president of booking and programming for SoFi Stadium and Hollywood Park. “Within our inaugural year, we have been able to deliver an incredible roster of global acts, representative of the local community and establish Hollywood Park as the place to play.”

The data is in the details in SoFi’s perch atop VenuesNow’s 2022 Q3 Stadium Chart with the survey’s highest gross, $72.4 million, based on 433,800 tickets reported sold and an average ticket price of $167. The numbers quantify the building’s red-hot success and speak to the facility’s ability to attract L.A.’s premium market. In addition to premium offerings and clubs, which include the Verizon Lounge, the Google Cloud Club, the Patio Club and the Ticketmaster Terrace, SoFi has a number of VIP and private suite offerings.

“We have eight different types of suites which give everybody a different experience depending on how you like to enjoy a concert or an event,” says Mike Forrester, SoFi Stadium’s vice president of premium sales and service. “We have five main spaces that we sell on a one-off premium basis, which is what we sell to a client who just wants to go to a concert and buy a premium experience.”

SoFi also features a number of eye-popping design and technological enhancements within its 3.1-million-square-foot (the NFL’s largest) confines. This is in large measure due to the eight dozen architects and designers led by Lance Evans of HKS, who blended a fully roofed building with open-air edges that makes the stadium feel open and airy.

“We offer a unique experience, unlike other venues with our technology, incredible sound, sightlines, and the one-of-a-kind Infinity Screen,” Castillo Butcher said.  “SoFi Stadium’s architecture is breathtaking and fans feel like they are in an outdoor amphitheater with the production of an indoor arena. The stadium was built 100 feet into the ground which enhances the vertical nature of the bowl allowing fans at every level to have excellent sightlines.  Plus, we offer flexible capacities and can configure the stadium from 27,000 to 33,000 and upwards of 70,000, which provides great options for touring artists.”

Looking ahead, SoFi’s first festival,
Rolling Loud California, is to take place at the adjacent Hollywood Park grounds March 3-5, followed by Wrestlemania 39 on April 1-2.  Also in the spring and summer, Hollywood Park will roll out the first phase of its residential and retail district, the largest urban mixed-use mega-development under construction in the western United States.

“As we conclude our inaugural year,” Castillo Butcher said, “we are continuously evaluating best practices and listening to our clients, staff, and fans.  Our intention is to always be better than the day before.” And that’s already become a tall order.