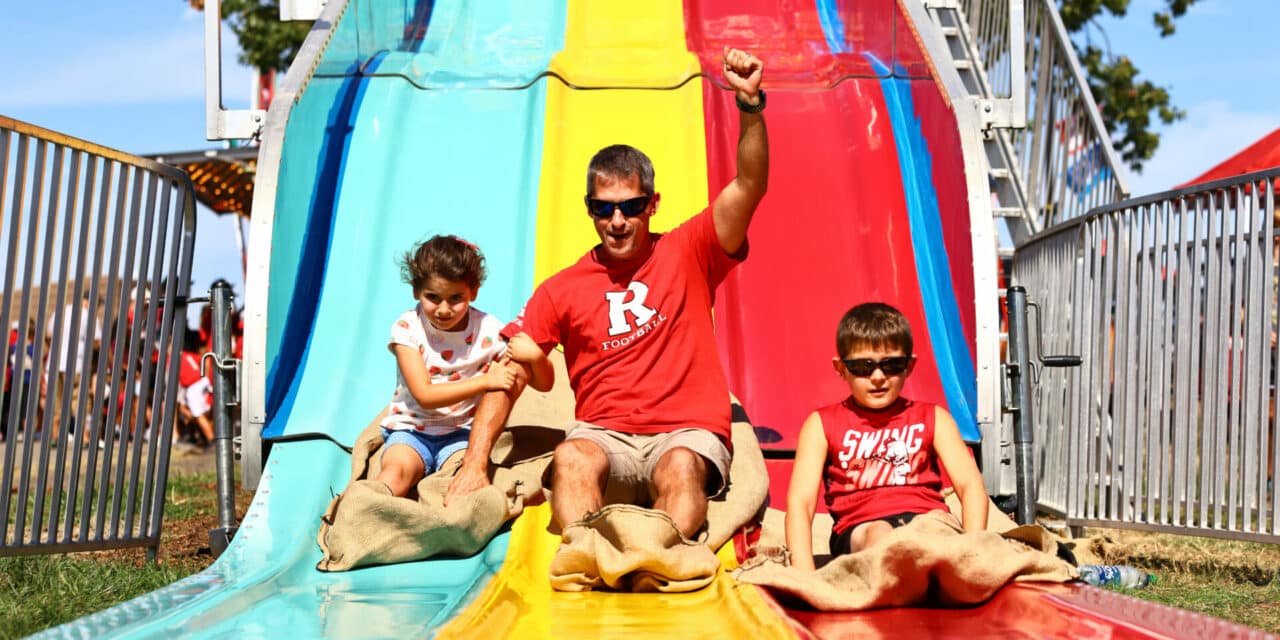 DOWN THE SHORE VIBE: Fans enjoy the giant slide that was part of the Boardwalk outside SHI Stadium before a home football game against Wagner on Sept. 10. (Courtesy Rutgers Athletics)

Rutgers University has unveiled a new pregame experience outside SHI Stadium in Piscataway inspired by one of the Garden State’s signature features: the oceanside boardwalks and pleasure piers along the Jersey shore.

Several thousand fans took advantage of the 1,000-foot-long row of around 20 food trucks as well as rides, games and live entertainment that made up what’s known as The Rutgers Boardwalk. The attractions opened four hours before Rutgers’ Sept. 10 home opener against Wagner, said PJ Mullen, RU’s assistant athletic director of marketing and game presentation. 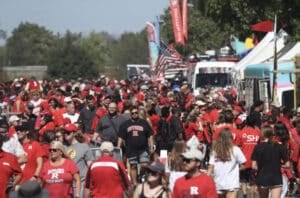 Set up along what’s known as Scarlet Way on campus, the Boardwalk will be activated for all five remaining Scarlet Knights home games.

Mullen said the Big Ten school’s strategy was to revamp the pregame experience to help improve attendance at the 52,454-seat stadium.

“We knew coming out of everything everyone had been through with COVID and how it just changed how we watched our favorite sports and concerts for a couple of years, we had to have something good,” Mullen said of the Boardwalk. “The idea was to bring as much New Jersey as we can to the experience.”

The idea of bringing the classic Jersey shore feel 35 miles inland became a thought exercise as ideas for how to make it feel authentic came from multiple sources in the athletic department, Mullen said.

A group of those officials meets every Thursday for a meeting that includes discussions of the game day experience, Mullen said. When it came to planning the Boardwalk, ideas came from those that have experienced the Jersey shore firsthand. 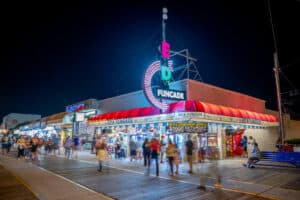 JERSEY EXPERIENCE: The idea of the Boardwalk outside SHI Stadium was shaped by input from Rutgers athletics and inspired by places like Wildwood, N.J., above. (Getty Images)

“It was one thing after another and from every department, not just marketing and PR, it was everybody: facilities operations, communications, sports properties. compliance, you name it, a person was coming up with an idea,” he said. “It was fun to see this past Saturday, because everyone’s ideas for the past year came to life.”

That said, Mullen had a few ideas of his own, having spent some time in Sea Isle City, N.J., a relatively short drive from his native Philly area, during the summer months.

“I still go there on weekends when I can,” said Mullen, a Penn State University grad who came to Rutgers last year after five years as marketing director in State College, Pennsylvania. “Everyone I spoke to said it felt like there was a boardwalk outside of our stadium.”

The Boardwalk opens one hour after the grounds open for tailgating next to the stadium, which Mullen knows will remain a popular option for many fans.

“We looked at a lot of food truck festivals this past year,” Mullen said. “We started reaching out to people back in December so we could book them well in advance and make sure we had them locked in for our six home games. We booked as many as we could.”

The mascot Sir Henry (after Revolutionary War Col Henry Rutgers, the school’s namesake), the Cannon Crew that blasts an antique armament after every Rutgers score, the Scarlet Knight and his horse “Excalibur” that runs through the end zone after touchdowns and star athletes from other RU sports, on hand to sign autographs, are all part of the fun, as is a beer garden. The experience, which includes sponsor activations, extends to the team’s ritual walk to the stadium.

Each week a different sports team is featured at the Boardwalk. For the Sept. 24 Iowa game (a 7 p.m. ET start) the men’s basketball team will be in the spotlight.

“We’re really looking forward to the Iowa game,” Mullen said. “It’s our first night game in a while.”