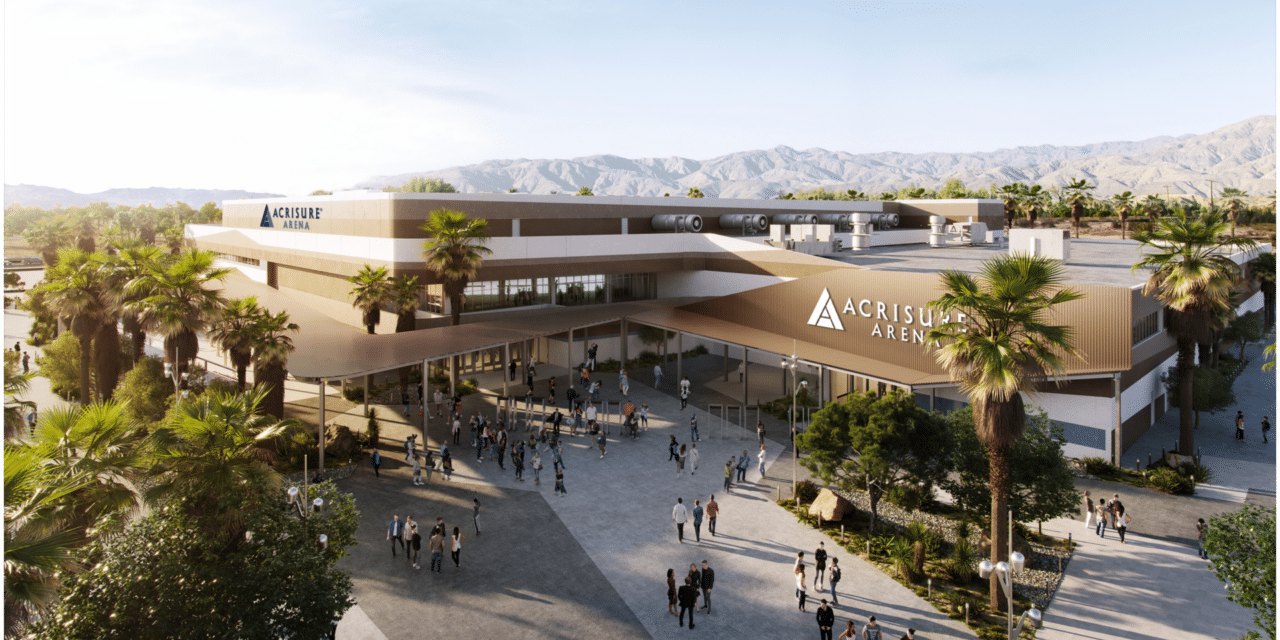 A rendering of Acrisure Arena displays the company’s brand on the 11,500-seat venue. The facility opens this fall as the home of the AHL’s Coachella Valley Firebirds. (Courtesy venue)

Financial terms were not disclosed for Acrisure Arena, but the value of the agreement surpasses $5 million annually, industry sources said, making it by far the richest deal to date for a minor league sports facility.

It’s the first naming-rights deal for Acrisure and came at the same time the company signed a deal to sponsor the 2021 Battle in Seattle, said officials involved in the agreement. The men’s basketball game between Gonzaga and Alabama took place in December at Climate Pledge Arena, an OVG property.

(Oak View Group is the parent company of VenuesNow and Pollstar).

In Palm Springs, the $290 million arena opens this fall as the home of the AHL’s Coachella Valley Firebirds, a new team and the top affiliate of the NHL expansion Seattle Kraken.

In eight years, the Grand Rapids, Michigan, firm has grown revenue from $38 million to $3.3 billion, doing business across nine countries, according to Acrisure CEO Greg Williams.

Williams was in Palm Springs for the official announcement. Acrisure is headquartered in Michigan but its largest concentration of clients is in California, which number in the hundreds of thousands, he said.

In addition, the company has 1,500 employees distributed among 150 offices statewide.

“It isn’t something we’ve done before but it’s one of those things where it’s time,” Williams said.

“We’ve spent no time or money at all creating any kind of brand awareness,” he said. “As we were canvassing opportunities through Bill Meara, one of our partners, we met Oak View Group. They’re a progressive, innovative firm and when they mentioned (the arena) was available, it was fortuitous; it was the right place at the right time.”

Meara recently joined Acrisure as president of the cybersecurity group. Dan Griffis, president of OVG Global Partnerships, which brokered the deal, has known Meara for several years through the sports industry. They first connected when Meara was with Access Sports Media.

The two got together last fall and started chatting about Meara’s new role with Acrisure when Griffis mentioned the naming-rights opportunity. From start to finish, the deal was completed in four months, which is quick in the naming-rights industry.

“They knew what they wanted,” Griffis said.

Looking at the deal’s cash value, Acrisure has made a big commitment.

Most minor league arenas, depending on the market, run in the low to mid six figures annually. Some run in the low seven figures, which is the case with many Major League Soccer stadiums.

In 2019, automaker Toyota signed a 10-year agreement to put its name on an AHL arena in Ontario, California, which is about 70 miles northwest of Palm Springs. That deal carries a value of $1.2 million to $1.3 million annually for a building previously branded as Citizens Business Bank Arena, sources said.

Acrisure, as part of its agreement, gets naming rights to the arena’s biggest club, its logo on the roof and at center ice, and on the facility’s videoboards.

The deal extends to Acrisure providing cybersecurity technology for the arena, as well as insurance coverage solutions connected to the venue’s online operations as part of the business arrangement, Williams said.

“We’re a partnership-driven business and have done over 700 acquisitions over the last eight years,” he said. “That’s our culture and mentality. There was an overlap and complementary approach to doing things that made sense for the overall relationship.”

Acrisure Arena’s primary tenant is the Firebirds, but OVG Global Partnerships positioned the 11,500-seat venue as a world class concert venue as well as a sports facility, Griffis said.

OVG Facilities, the arena operator, expects to book 150 events a year for a building that sits about two hours east of Los Angeles. The construction site is near Interstate 10, the major highway connecting the two cities.

The land is owned by the H.N and Frances C. Berger Foundation. OVG is financing the project together with the Kraken and concert promoter Live Nation.

Acrisure Arena was designed by Populous and built by AECOM Hunt with CAA Icon serving as owner’s representative. The building will have 20 suites and four hospitality lounges tied to 920 club seats.

“We’d like that to be the case and look forward to exploring those opportunities with OVG,” he said.