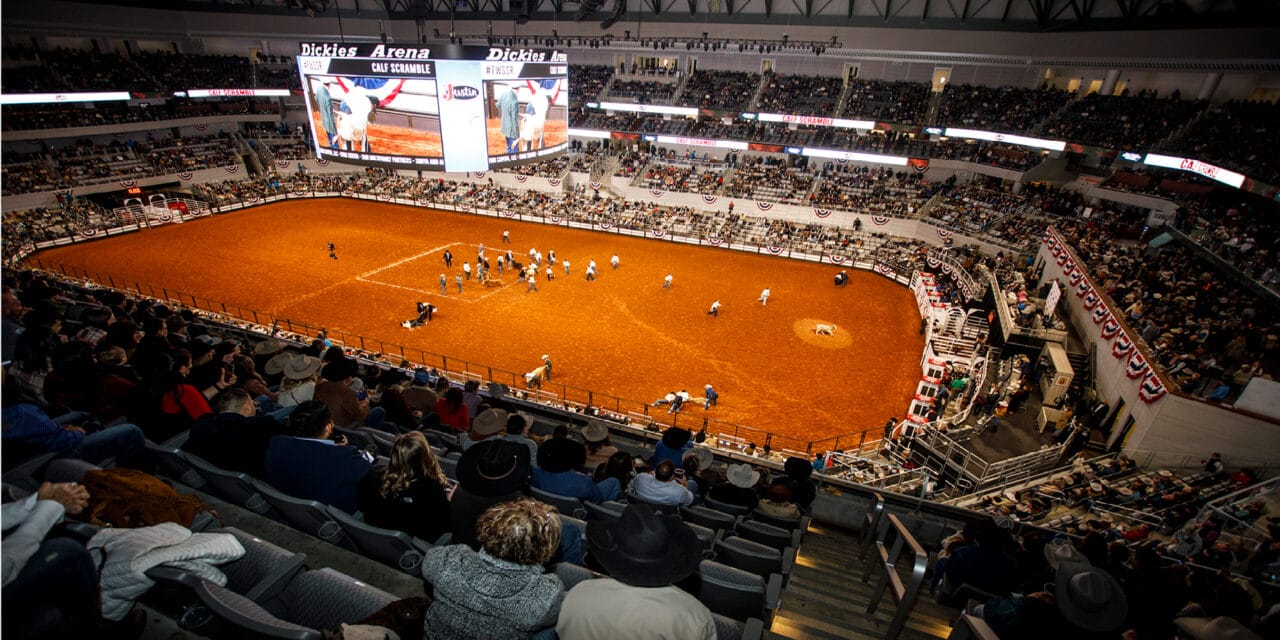 The calf scramble, seen here at Dickies Arena, is part of youth programming for the Fort Worth Stock Show & Arena, the venue’s primary tenant. (Courtesy venue).

Venue proves Fort Worth is separate market for concerts

Dickies Arena is off to a rough and tumble start in 2022 and that’s a good thing.

The Fort Worth Stock Show & Rodeo, primary tenant for the city’s 3-year-old arena, kicked off Jan. 14 and runs through Feb. 5. Most of the 25 performances have sold out and food and drink spending is tracking well ahead of the 2020 event, said Matt Homan, the facility’s president and general manager.

The early returns bode well for major rodeos coming up over the next two months at AT&T Center in San Antonio and NRG Stadium in Houston. Those two events are co-tenants with the NBA’s San Antonio Spurs and NFL’s Houston Texans, respectively.

All three events are sanctioned by the Professional Rodeo Cowboys Association, the sport’s largest organization.

In Fort Worth, there was no rodeo in 2021 due to the pandemic. The 2020 event was the first time for the rodeo at the arena, which opened in November 2019. It was previously held for 76 years at Will Rogers Memorial Coliseum, the older and smaller arena on the stock show grounds.

The rodeo itself has been going on for 125 years and north Texans obviously missed it over the past two years during the shutdown of live entertainment facilities. Homan said the rodeo has evolved into a big social scene for residents of Fort Worth, which now stands as the 12th largest city in the U.S. with a population of about 930,000.

Dickies Arena can fit 9,600 for the rodeo, about twice the capacity of the old venue.

“We still have tickets left for seven to eight shows,” Homan said on Jan. 21. “We sell out the whole lower bowl and rodeo boxes in advance. Food and beverage per caps are through the roof. We’re averaging over $30 a head. Two years ago, $24 was the average at the end of the run.”

Homan works for Trail Drive Management Corp., the nonprofit formed to run the $540 million facility that opened in November 2019. Every aspect of arena operations is in-house, including food service.

“We got a little bit better than our first year with the rodeo,” Homan said. “In-seat service is better and our clubs are active. People are spending a little more money out here too. After being tied down, they’re ready to get going and bring it back.”

Many sports and entertainment venues have gone cashless, driven in large part by the pandemic. Dickies Arena is an exception. Cash transactions account for more than 30% of arena revenue and Trail Drive officials didn’t want to eliminate that option.

“We thought about going cashless, but it’s such a large part of our income that we felt like taking it away was more scary than keeping it,” Homan said. “Our vice president of food and beverage, Julie Margolin, and I sat down and determined that going away from it would hurt us.”

San Antonio and Houston both book concerts with national acts following rodeo performances and those shows help drive attendance at those two events.

That’s never been the case historically at the Fort Worth rodeo, although officials are now booking more live music tied to the event. This year, local acoustic acts play in the south club at Dickies Arena and there’s an outdoor tent themed as the Bud Light Roadhouse showcasing regional bands.

In addition, they’re developing a concert series during the rodeo at Will Rogers Auditorium, the 2,856-seat auditorium that sits next to the coliseum.

This year, the Old 97s, Clint Black and Jeff Foxworthy are part of auditorium programming after the first concert series in 2020 drew a sold-out Foreigner show, among a few other events at the older venue.

Live Nation is a partner for the concert series.

“That’s where we want to grow live music during the rodeo,” Homan said.

Looking back, Dickies Arena shut down in March 2020, about four months after opening its doors. The building reopened for business in August 2020 with limited capacity. It began operating at full capacity in April 2021.

The facility held about 90 events during its second fiscal year, Nov. 1, 2020 through Oct. 31, 2021, he said. The Bassmaster Classic fishing tournament, USA Gymnastics and the U.S. Olympic Trials in wrestling were part of the event mix.

Trail Drive Management did it all during the pandemic without any layoffs and furloughs among the arena’s full-time staff of about 100 people. It helped that Texas was among the first states to allow public assembly venues to reopen in March 2021 at 100% capacity.

“It’s the proudest thing I can say in my (16-year) career,” Homan said. “We kept expenses down and maintained the building. We probably did a lot more events with fans than other venues.”

Over the last four months of 2021, Dickies Arena played host to 11 concerts, starting with Eric Clapton on Sept. 13 and ending with a sold-out show by singer-songwriter Parker McCollum on New Year’s Eve.

Arena capacity is 12,500 for an end stage concert.

Clapton was the arena’s first full-capacity concert in 560 days. The show moved 11,370 tickets, one of six sold-out concerts among those 11 events, according to VenuesNow box office data.

James Taylor with Jackson Browne, Blake Shelton, Elevation Worship, Hall & Oates and ZZ Top were the other sellouts. ZZ Top, a half-house show, was a benefit for the UNT Health Science Center, a public medical school.

“We’ve proven that Fort Worth is a top market,” Homan said. “We’re getting the big shows and promoters are finding out they can do both American Airlines Center (in Dallas) and Dickies Arena.”

The same is true for other Dallas venues an artist may play before performing in Fort Worth.

In late July, Parker McCollum, for example, played a sold-out show at Dos Equis Pavilion, an amphitheater at Fair Park. It took place five months before his Dickies Arena engagement.

“It’s a pretty incredible story that we’re starting to paint that picture that Fort Worth is its own market,” Homan said.

Beaver Productions, whose principals are Barry Leff and Don Beaver, promoted Clapton and Taylor/Browne. They’ve quickly become believers in the arena and strength of a city within a 45-minute drive of Dallas.

“Barry Leff jokes with me that he’s got a bumper sticker on his car that says ‘Everything sells out in Fort Worth,’” Homan said. “As far as attendance and ticket sales, we’re competing with bigger cities and beating most of them.”